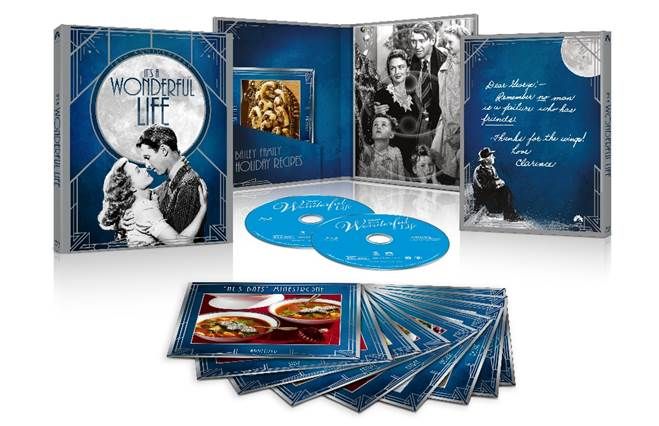 HOLLYWOOD, Calif. – This holiday season take a trip to Bedford Falls to celebrate the 75th anniversary of one of the most beloved films in cinema history: director Frank Capra’s timeless classic IT’S A WONDERFUL LIFE.   Named the #1 most inspiring film of all time by the American Film Institute, IT’S A WONDERFUL LIFE has touched generations of viewers with its uplifting and life-affirming message of hope.

On November 16, 2021, Paramount Home Entertainment will release a collectible, limited-edition two-disc Blu-ray set with a beautifully colorized version of the film in high definition as well as the original, digitally remastered black-and-white movie in high definition, and access to a digital copy of the film.  Perfect for gift-giving, the set also includes 10 collectible recipe cards from Insight Editions’ It’s a Wonderful Life: The Official Bailey Family Cookbook with cuisine inspired by the film.  Additionally, the set includes over 45 minutes of previously released bonus content exploring the meticulous process of preserving and revitalizing this iconic masterpiece, a look at the movie’s extraordinary sound, music, cinematography and visual effects, and vintage footage from the film’s wrap party.

Starring James Stewart, Donna Reed, Lionel Barrymore, Thomas Mitchell and Henry Travers, IT’S A WONDERFUL LIFE has made an indelible impact on popular culture and continues to be a cherished part of many families’ holiday traditions.

U.S. Rating:        PG for thematic elements, smoking and some violence