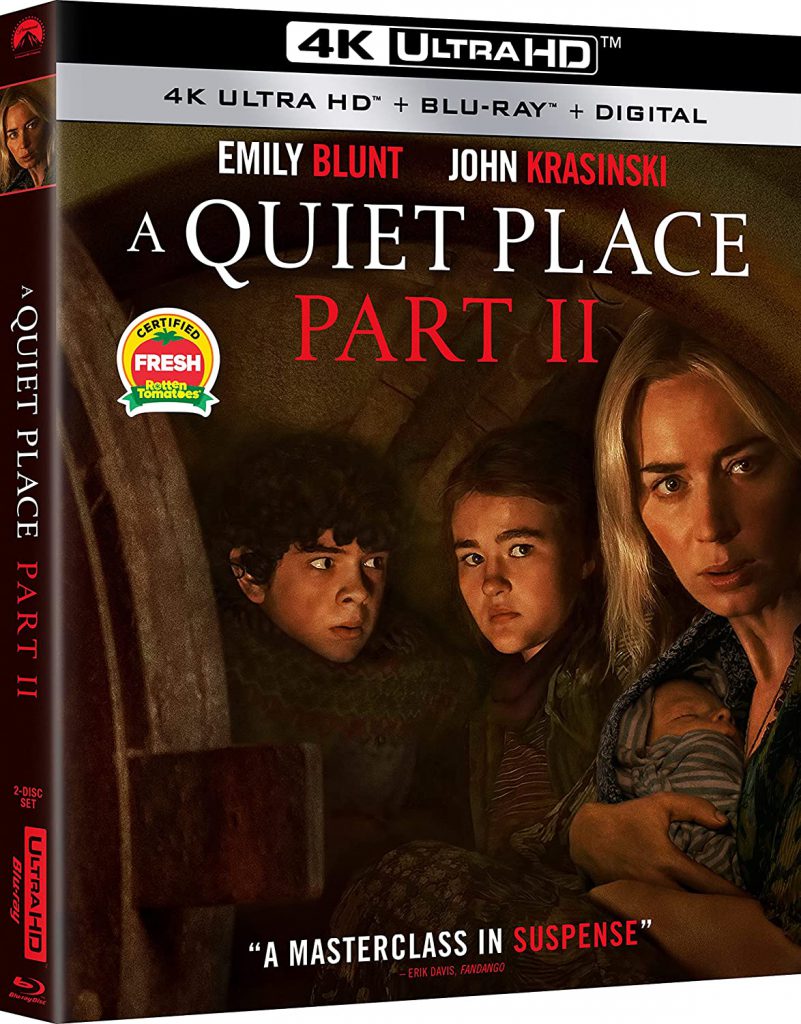 The A QUIET PLACE: PART II 4K Ultra HD Combo Pack, Blu-ray and Digital* releases boast exclusive special features that take viewers deeper into the world originated in the global smash hit A Quiet Place.  Follow Krasinski on the set of the new film as he details the cast and crew’s incredible work in a video Director’s Diary; uncover the secrets of the monstrous invaders; dig into the two-film character arc of daughter Regan; watch a breakdown of the unforgettable marina scene; and delve into the extraordinary visual effects and sound design.

The 4K Ultra HD and Blu-ray Discs™ also boast a Dolby Atmos® soundtrack remixed specifically for the home to place and move audio anywhere in the room, including overhead, and the 4K Ultra HD disc features Dolby Vision™ high dynamic range (HDR), which delivers greater brightness and contrast, as well as a fuller palette of rich colors.**

Following the deadly events at home, the Abbott family (Emily Blunt, Millicent Simmonds, Noah Jupe) must now face the terrors of the outside world as they continue their fight for survival in silence. Forced to venture into the unknown, they quickly realize that the creatures that hunt by sound are not the only threats that lurk beyond the sand path in this “gripping, edge-of-your-seat thriller” (Scott Mantz, BFCA) written and directed by John Krasinski.

If they hear you, they hunt you! Silence is survival in these two terrifyingly suspenseful thrillers. Follow the Abbott family (Emily Blunt, John Krasinski, Millicent Simmonds, Noah Jupe) as they face the terror of mysterious creatures that hunt by sound.

Fans can enjoy the ultimate viewing experience with the 4K Ultra HD Combo Pack, which includes an Ultra HD Disc with Dolby Vision and Dolby Atmos and a Blu-ray Disc™ with Dolby Atmos.  The Combo Pack includes access to a Digital copy of the film and the following:

The A QUIET PLACE Blu-ray is presented in 1080p high definition with Dolby Atmos. The Blu-ray includes access to a Digital copy of the film as well as the bonus content detailed above.

Based on Characters Created by BRYAN WOODS & SCOTT BECK

Written and Directed by JOHN KRASINSKI

Canadian Rating:       14A for frightening scenes