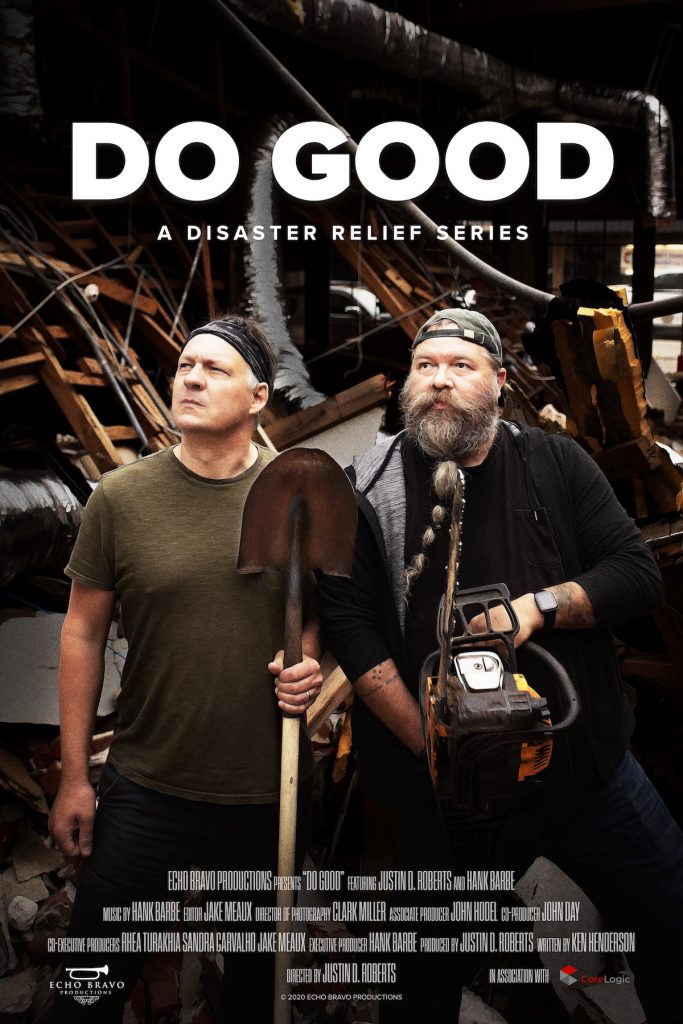 “With the recent deadly winter storms hitting much of the country, we saw many examples of neighbors rising to the occasion to help neighbors. DO GOOD tells similarly powerful and inspirational stories of the recovery efforts following the back-to-back hurricanes that hit Louisiana last year,” said Producer and Director Justin Roberts. “In challenging times such as our nation has been facing, it’s time to shine the light on the many people who are sacrificing for others.”

Roberts is a military veteran and founder of Echo Bravo Productions, which focuses on making military-, veteran- and first responder-centered films. The company produced the award-winning documentary NO GREATER LOVE about U.S. military members fighting in Afghanistan.

Each episode of DO GOOD explores the work of one organization pitching in to help rebuild its community following a storm that damaged 95% of structures in Lake Charles, Louisiana. All monetized YouTube revenue will support the featured organization.

“DO GOOD will change the way charities raise support,” said Hank Barbe, co-host of the series along with Roberts. “By donating 100% of monetized views to the featured charities, we’re allowing people who do not have the means to donate to still make a difference. Everyone can stilldo good, just by watching and sharing.”

Barbe, also a veteran, is the lead singer in the Three Beards Band.

“The citizen-led relief we saw in action after the hurricanes shows that people are hungry to help those in need,” said Rob Gaudet, Founder and Director of Cajun Navy Foundation. “The DO GOOD series verifies that when neighbors offer neighbors efficient, fast help, with no red tape and very little overhead, they can’t be stopped.”

“The United Way of Southwest Louisiana is committed to building strong, successful families and strengthening our community,” said UWSL President and CEO Denise Durel. “Never in our 80 years of service has that been needed as it is now. Justin’s DO GOOD series brings needed attention not just to the devastation of the hurricanes but to the heroic actions of those helping build back.”

Laura was the most severe hurricane to hit Louisiana in over 160 years—stronger than Katrina—with sustained winds of 150 mph, 77 deaths and up to $12 billion in damage, according to estimates from docu-series sponsor CoreLogic. Delta followed with more devastation to the Louisiana coast, as the record-breaking tenth named hurricane to hit the U.S. in one year.

“Even as Delta slammed into Southwest Louisiana, I said, ‘The sun will come out again, and we will get through this,’” said Nic Hunter, mayor of hard-hit Lake Charles. “A series like DO GOOD is so valuable now as it shows the best of the human spirit at work as people help people to reclaim their lives following a disaster.”

“No city in Southwest Louisiana was spared,” said Sulphur, Louisiana, Mayor Mike Danahay. “But I saw our community come together to recover. DO GOOD tells that amazing story.”

DO GOOD is produced by Echo Bravo Productions and sponsored by CoreLogic, a global property information, analytics and data-enabled solutions company that provided the property damage estimates and weather forensics science behind the documentary.

“A top CoreLogic priority is helping communities rebuild faster after a natural disaster, and one of the ways we do that is by providing insurance companies with the catastrophe data and tools they need to take care of impacted homeowners quickly,” said Howard Botts, CoreLogic Chief Scientist. “Rapid recovery of impacted communities is essential to maintaining a healthy housing economy. We were honored to support DO GOOD and be a part of this initiative to shine a light on the resilient citizens of Southwest Louisiana.”