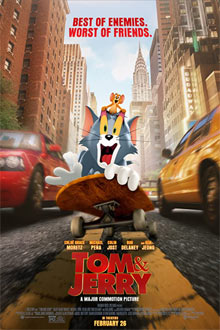 An ambitious young girl cons her way into working for a prestigious New York City hotel just in time for a high profile wedding to be held there. As she takes on the task to prove she can help manage events at the hotel, a mischievous mouse named Jerry decides to take up residence within its walls, and an alley cat Tom tries to catch him. 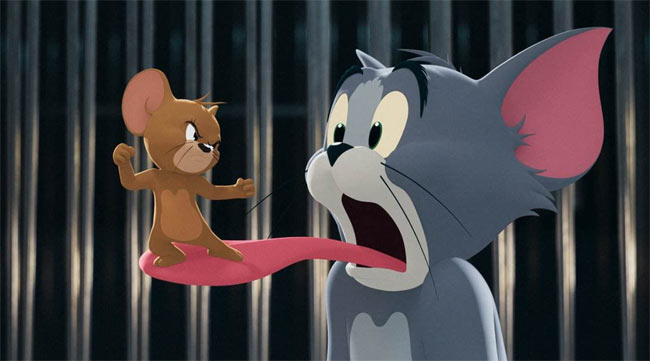 Let me just say that I loved watching the original Tom and Jerry cartoons as a kid. (And I still love them, if I’m being honest.) While the original cartoons have caught flack over the years for being too violent, or even racially insensitive, there was just something so fun and charming about that particular cat and mouse. The two have had multiple cartoon series through the years (with varying quality), including an animated feature film in 1992 where the pair actually talked. But nothing comes close to the early cartoons from Hanna-Barbera (particularly the ones in the 40’s and 50’s). For 2021, the dynamic duo get the live action/animated hybrid treatment, bringing these iconic characters into our world for the very first time (Not going to count Jerry dancing with Fred Astaire, of course).

For 2021’s Tom and Jerry, director Tim Story (Fantastic Four, Ride Along) creates a world not too far off from 1987’s Who Framed Roger Rabbit. In that Disney classic, animated characters lived in the same world as live action humans. For Tom and Jerry, ALL of the animals are animated. It makes for a funky world for the humans to live in, but it allows for the film’s main characters to not be the only animated ones on screen (unlike the Garfield films where Garfield was the only animated animal). It makes for a fun environment that helps keep the material light and enjoyable. However, Story tries extra hard to create a movie that works for the adults in the audience, too. And, unfortunately, it doesn’t work as often as intended. The overarching plot of the movie involves a celebrity wedding that the film’s central hotel is hosting. Instead of focusing entirely on our titular cat and mouse, or even Chloë Grace Moretz’s lead role as a girl who quasi-accidentally cons her way into working for a lavish NYC hotel, the story zeroes in on some of the drama within the couple’s relationship. Of course, it sets things up for everyone working together to help the couple during the movie’s climax, but it brings some unnecessary adult drama–which often feels forced–to a movie that doesn’t need it. No one goes to see anything involving Tom and Jerry to watch a rich, high profile couple fight over how extravagant their wedding should or shouldn’t be (and how many kids or their parents can even relate to that story?!). These setbacks aren’t enough to entirely sink Tom and Jerry, but they definitely hinder it plenty. 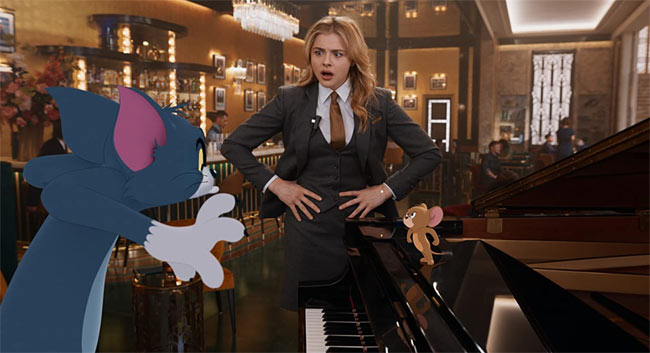 If you’re a Tom and Jerry fan, the movie is relatively faithful to the characters and frequently revisits classic gags from some of the most memorable Tom and Jerry cartoons. One could argue that this also means there’s a sincere lack of fresh gags for them to employ, but seeing some familiar hijinks was more enjoyable than not. This movie returns to the non-speaking characteristics of Tom and Jerry, with one exception when Tom sings an auto-tune-soaked song while playing the piano. It’s a callback to the times Tom would sing in the cartoons, and it mostly works. However, if you’re not a fan of T-Pain or hip hop music, you’re likely to be turned off by most of the music Tom and Jerry offers. Director Tim Story lends his own voice to a rapping pigeon who occasionally narrates the story, and most of the soundtrack has an R&B or hip hop vibe. It often works just fine, admittedly, but it’s not a style of music that comes to mind when I think of Tom and Jerry; I would have loved to hear more musical callbacks to the original cartoons (and I think it would have worked, considering). Speaking of sound, for the times we hear Tom scream or yell, the filmmakers utilized archival vocal samples from the classic cartoons – and it’s a joy to hear!

The human players in the movie do their best with the material at hand. This seems like the kind of movie that’d be beneath a young talent like Chloë Grace Moretz, but she gives it her best regardless. Michael Peña is one of the best things about the Ant-Man movies and he proves here that he can only do so much if the material isn’t strong. Still, he does well and gets to deliver a few funny lines. Rob Delaney is perfect as the semi-inept hotel manager, making it more believable that someone like him might go for a crazy idea like hiring Tom to get rid of Jerry. Finally, Pallavi Sharda and Colin Jost play the story’s high profile couple, but while they’re okay in their respective roles, they feel rather bland and uninteresting. Every time the story kept coming back to focus on them, I just had to wonder… why?? 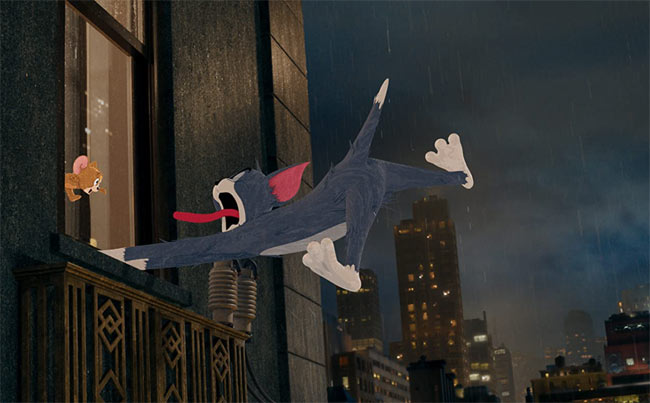 The content is everything you’d expect from Tom and Jerry. The two beat each other senseless throughout the movie, so it’s just as violent as the original cartoons often were. While none of it is particularly graphic, the gag where a large lump forms on a cartoon character’s head and then is pushed down by another character (only to pop up again), is used a couple times. Also, some cartoon characters lose teeth or get mangled, but it’s pretty much par for these two. One scene shows Jerry drinking from a martini glass and eating olives behind a closed window as Tom tries to get to him. When the fight inevitably makes its way into Jerry’s room, we see the bottle he’s drinking from is Martinelli’s Sparkling Cider (a nonalcoholic beverage). There is a human character named Cameron who works at the hotel bar, though, and often serves drinks to characters. And at the wedding reception, some characters have drinks, particularly a cartoon peacock who is spotted guzzling wine. There isn’t much by way of language as most characters go out of their way to clearly enunciate “Oh my gosh.” However, I noticed at least 3 instances where characters used “G-d” instead. Also, an animated elephant says the letters “WTF” (while the “F” is kind of drowned out by noise in the scene), and while talking about getting a device with wifi capabilities, Ben says something like “So I thought ‘why the fi not!'” Both might seem harmless, but they’re a bit borderline for a movie aimed at kids.

Overall, Tom and Jerry may not be a great movie, but it’s pretty decent for a live action animated film. If you’re a fan, there should be enough of Tom and Jerry in this movie to make it worth watching, even though at times it feels like we take too much time away from them for it being a movie about them. But despite this, Tom and Jerry is pretty tailor-made for young audiences (my 10 year old son loved it), and makes for some enjoyable family entertainment. (Note: There is a post-credits scene, but it has nothing at all to do with Tom and Jerry and is just a gag about a couple of the human characters.)

Sex/Nudity: Some female characters show some minor cleavage; Kayla is seen in a business-grade skirt for most of the movie; it’s implied that Ben and Preeta stay in the same hotel room, even though they’re not married yet.

Vulgarity/Language: 1 “Oh my G-d,” 1 “My G-d,” 1 “Oh G-d,” an animated elephant says the letters “WTF” (while the “F” is kind of drowned out by noise in the scene), and while talking about getting a device with wifi capabilities, Ben says something like “So I thought ‘why the fi not!'”

Alcohol/Drugs: Jerry is seen sipping from a martini glass, but it turns out to be sparkling cider; An animated peacock is seen guzzling wine; Some characters drink at a hotel bar; Some drinks are served at a wedding reception.

Blood/Gore: None, but Tom and Spike both have teeth shattered out of their mouth at different times; At one point, Tom pulls open his cartoon chest to reveal his DNA strands (Or something like that); We see a lump rise up on Spike’s head after he’s hit there. Tom tries to push it down, but it pops back up. Spike then hits Tom on the head and a lump forms on his head; We see a lump on Tom’s head again.

Violence: LOTS of cartoon violence – Tom and Jerry beating on each other with bats, explosives, mallets, glass, axes, etc, with some animated characters getting hit by cars, biting each other, falling a great distance to the ground, and more; A dog bites Terence’s hand. We don’t see the wound, but Ben asks if Terence is okay and says that it looks like his hand is bleeding; Terence gets caught in what he calls an “animal tornado” with Jerry, Tom and Spike fighting in a whirlwind; Tom starts to pull the chain on a chainsaw to go after Jerry, but Kayla talks them down; We see lots of debris and destruction, like glass windows shattered, holes in walls, torn furniture and more.