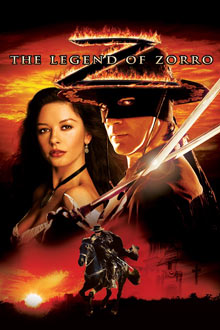 The Legend Of Zorro 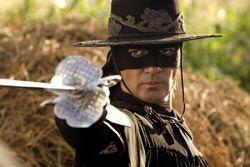 The year is 1850 and our swashbuckling crusader is challenged by the most dangerous mission of his life. After fighting to help California become the 31st state of the Union, Zorro (Banderas) must live up to the promise he made his wife Elena (Zeta-Jones) – to give up his secret identity and live a normal life as Alejandro de la Vega. When he hesitates, it threatens to tear them apart. Now, the same forces that conspired to keep California from becoming part of the United States are plotting to unleash a threat that has been 500 years in the making, a threat that could change the course of history forever. And only Zorro can stop it. (from Sonypictures.com)

In 1998, legendary swashbuckling hero Zorro returned to the big screen in The Mask Of Zorro. The film was well-casted, putting Antonio Banderas in the black mask and cape and delivering the stunning Catherine Zeta-Jones a breakout role. The PG-13 film was a near-instant classic, but suffered from some truly unnecessarily violent and gross content that hindered the film from being a staple family film. 2005’s The Legend Of Zorro is the belated sequel that tones down the franchise for the family, albeit still remaining quite violent at times.

I have to admit that although it seems to have taken forever to finally give the film a sequel, it was great to see Banderas and Zeta-Jones in their roles together again. Legend, having been toned down for family, is strung together by more adult themes, building much of the story around the marital tension between Alejandro and Elena. Set ten years after the 1998 story, the couple are raising their son Joaquin, who knows nothing of his father’s heroics, and barely knows him because of his secrets (often excusing his absence as part of his day-to-day operations of being a Don). Elena has grown tired of Alejandro’s role as Zorro and longs for him to settle down as the three of them. The story weaves this element into the main plot quite well, offering a few interesting twists and turns along the way.

I was pleasantly surprised how good newcomer Adrian Alonso was as their son Joaquin. I have to admit I was quite terrified how the two of them having a son would affect the film (let’s not forget how silly and poorly executed the main characters in The Mummy Returns having a son ended up being). Thankfully, I found Adrian to be a terrific little actor who was able to be mischievous yet charming and believably emotional when needed. It was excellent to see Banderas don the mask once again, and for Zeta-Jones to return to her firecracker of a role. Unfortunately, Zorro does take a back seat to Joaquin and even the drama between Armand and Elena for good portions of the film. But some of Legend‘s best moments are when Alejandro and Elena are interacting or the three are together. 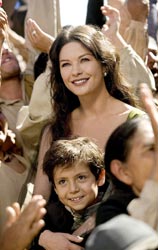 The action was mixed. Some stunts were spectacular, while a lot of the special effects were second-rate at best (the digital fire effects were especially cheesy and distracting). It seemed kind of strange to watch Zorro fight and never stab anyone with his sword, but there was plenty of gunfire and physical fighting in the film. The violence surprised me at times, too. It’s especially stuff like a scene where a man’s head is blown up by explosives off-screen that I was surprised to find in a PG film. There’s also another brief intense sequence where Elena finds a couple discolored dead men, who had been murdered, stashed in a closet. Another scene involves a shootout at a ranch that leaves a character dead with his wife weeping hysterically over him. It just seemed that some moments seemed rather heavy for a targeted younger audience (and that’s not even addressing the heavy marital drama).

The Legend Of Zorro possesses a sort of strange spirituality to it. McGivens, one of the main villains in the film, spouts scripture and commits evil and violent crimes in the name of the Lord. However, the film balances this out with the presence of Friar Felipe who is more true to his faith, and Alejandro’s leanings to seeking God’s direction for his role as Zorro. I was a little concerned with the portrayal of McGivens as being so evil while claiming to be a doer of God’s work, but I was glad to see the good guys given a healthy belief and devotion in the Father to contrast it. McGivens made for a good villain, but his portrayal was still borderline.

All in all, I ended up enjoying The Legend Of Zorro. It may not be as strongly written and played-out as its predecessor The Mask Of Zorro, but it’s a more than worthy sequel, and one of the better follow-ups for a series in recent memory (not like the travesty Men In Black II or the silly and problematic Shanghai Knights, for example). Most fans of the 1998 film should enjoy this installment, while those looking for an exciting family outing will definitely find one in The Legend Of Zorro, but will want to proceed with caution nonetheless. (Reviewed: 11/2/05)

May 7, 2020 Follow-Up Review: (Some spoilers ahead)
It’s been fifteen years now since The Legend of Zorro brought Alejandro and Elena back to the big screen. I was much more enthusiastic about this sequel in 2005, but after seeing it a few more times since then, I’ve found it be a much more underwhelming follow-up to the quite solid 1998 original. For starters, Alejandro is just beginning his role as Zorro in the 1998 film, and here, the series’ first sequel, he’s already being hounded by Elena to retire. Furthermore, the plot causes Elena and Alejandro to split up–to the point where they even get divorced. The story puts poor Alejandro through the ringer, and he’s tormented by his broken family–all seemingly because he isn’t ready yet to hang up the mask and cape just yet. The movie’s best moments come in the last act when things start getting back to normal and Elena and Alejandro make nice again, but it’s so bittersweet that the pair have to go through this at all. Still, the movie gets one relationship right from the start with Alejandro and his son Joaquin. When he finds out his father is not just some stuffed-shirt, but is the beloved hero Zorro, it gets me every time. It’s such a great moment. But from over-the-top action beats (I mean, really? That ENTIRE train would blow up car after car if one of the BACK cars had the explosives in it?), to the uncomfortable representation of Christianity through a severely twisted villain, to the heartbreaking split between Alejandro and Elena, it’s a bit of a downer sequel. Still, if you’re chomping at the bit for more of the characters from The Mask of Zorro, I suppose you could do worse than The Legend of Zorro.

There is no planned 4K UHD disc release for The Legend of Zorro, so fans will need to purchase a digital copy to see it. The iTunes digital copy contained the following extras (in addition to a director’s commentary):

The Legend of Zorro in 4K UHD (Streaming) – The film looks good streaming in 4K, but if I’d seen it on its own, not knowing it’s supposed to be 4K, I never would have guessed. At best, it’s a solid blu-ray transfer, but I wouldn’t really call it a 4K UHD transfer. I thought the older Mask of Zorro transfer looked considerably better, actually.

Director’s Deleted Scenes with Optional Commentary (6:33) – There are no new deleted scenes that haven’t been previously released. In “Alejandro drops off Joaquin,” Alejandro tries to convince his son that they’ll have fun when he picks him up again. “Chinatown” shows Elena meeting with the Pinkertons in Chinatown. It’s a rather weird, kind of creepy scene, where they come across as more evil (and one of the two men is seen without a shirt receiving an acupuncture treatment). Lastly, “Symphony by the bay” shows Armand and Elena watching a live orchestra, but there’s absolutely no music playing in this scene (only made more awkward when the audience claps at the unheard song finishing). In the scene, Alejandro visits Elena to warn her that Armand may be up to something.

Armand’s Party Featurette (12:08) – This featurette, most likely from the original DVD release, covers the filming of the party outside Armand’s mansion. The featurette addresses fitting the extras with costumes, shooting outside for a more dramatic effect, lighting the scene with balloons, battling the rain, and dance rehearsals.

Sex/Nudity: Alejandro and Elena kiss very passionately a few times during the film; Elena wears dresses common to the era the film takes place in that reveal varying amounts of cleavage; We see Alejandro in a tub with his fellow Dons playing cards. He gets out and we see him drying off with a towel (we don’t see any nudity); Alejandro is wakened by a maid and he gets out of bed only to discover that he is naked (we don’t see anything); Elena and Alejandro slice their initials “E Z” into a man’s underwear and we see the bare skin through the cuts in his clothing.

Alcohol/Drugs: We see Felipe and Alejandro drinking wine at a party; Alejandro drinks a lot of wine very fast and gets completely drunk. We then see him drinking more from a bottle later on and his horse drinking from the bottle too; Elena orders a double tequila; some other characters casually have wine or other kinds of alcohol during the film

Blood/Gore: McGivens has a cross-shaped scar on his cheek; Zorro hits McGivens in the jaw and we briefly see him spitting out his teeth with a little bit of blood; McGivens falls into a patch of cacti and emerges with needles sticking out of his face (with just a little blood around his mouth); We see McGivens holding a set of wooden teeth, sharpening them with a knife before putting them in his mouth; A character is shot off-screen and we see them walk out of a building and collapse to the floor. We then see a little bit of blood on their shirt in the back where they had been shot; We see a tiny bit of blood on a ripped portion of Joaquin’s sleeve, presumably from an unseen wound; We see two dead bodies that are discolored from being dead for a little while, but aren’t especially bloody or gory.