“Like falling in love for the first time.”
Crystal Bell, MTV

RISK EVERYTHING FOR LOVE WHEN

ARRIVES ONTO BLU-RAY™ COMBO PACK, DVD AND DIGITAL FROM

Own it early on Digital on August 1

Blu-ray and DVD debut on August 15 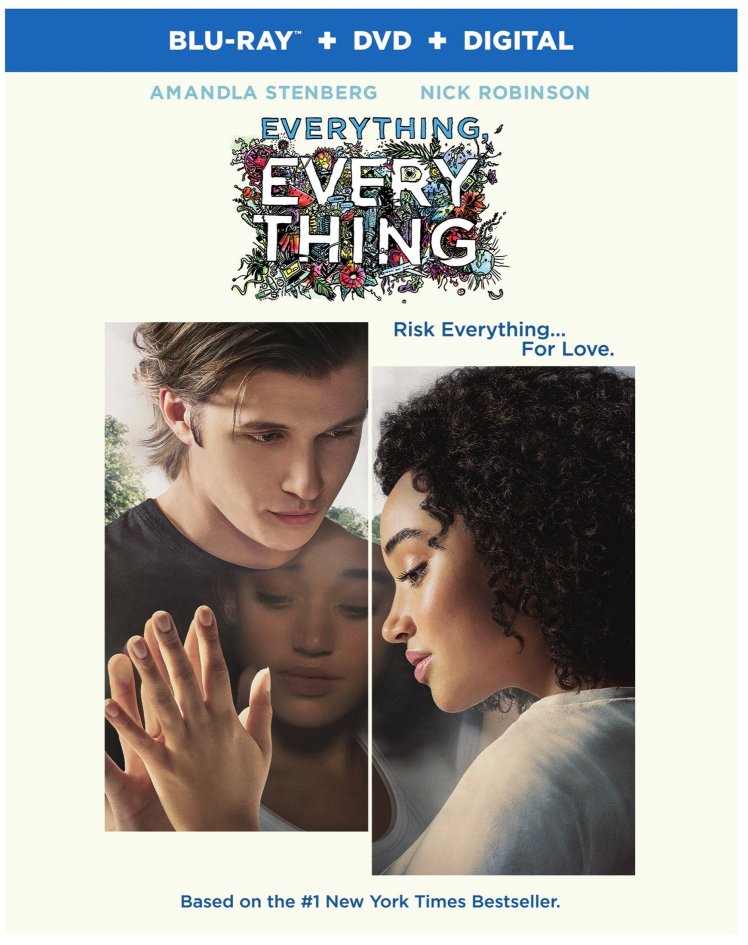 What if you couldn’t touch anything in the outside world? Never breathe in the fresh air, feel the sun warm your face…or kiss the boy next door?

“Everything, Everything” tells the unlikely love story of Maddy, a smart, curious and imaginative 18-year-old who due to an illness cannot leave the protection of her home, and Olly, the cute boy next door who ignites her desire to escape safety and sacrifice everything for love.

“Everything, Everything” Blu-ray Combo Pack contain the following special features:

“Everything, Everything” Standard Definition DVD contains the following special features:

On August 1, “Everything, Everything” will be available to own for streaming and download to watch anywhere in high definition and standard definition on favorite devices from select digital retailers including Amazon, CinemaNow, FandangoNow, iTunes, PlayStation, Vudu, Xbox and others. On August 15, “Everything, Everything” will be made available digitally on Video On Demand services from cable and satellite providers, and on select gaming consoles.

*Digital movies or TV episodes allow fans to watch a digital version of their movie or TV show anywhere, on their favorite devices. Digital movies or TV episodes are included with the purchase of specially marked Blu-ray discs. With digital, consumers are able to instantly stream and download movies and TV shows to TVs, computers, tablets and smartphones through retail services like CinemaNow, Flixster Video, Vudu and more. For more information on compatible devices and services go to wb.com/digitalmoviefaq. Consult a digital retailer for details and requirements and for a list of digital-compatible devices.

Metro-Goldwyn-Mayer (MGM) is a leading entertainment company focused on the production and global distribution of film and television content across all platforms. The company owns one of the world’s deepest libraries of premium film and television content as well as the premium pay television network EPIX, which is available throughout the U.S. via cable, satellite, telco and digital distributors.  In addition, MGM has investments in numerous other television channels and digital platforms. For more information, visit www.mgm.com.