Enjoy more action and more Squad in the Extended Cut with extra footage not seen in theaters! 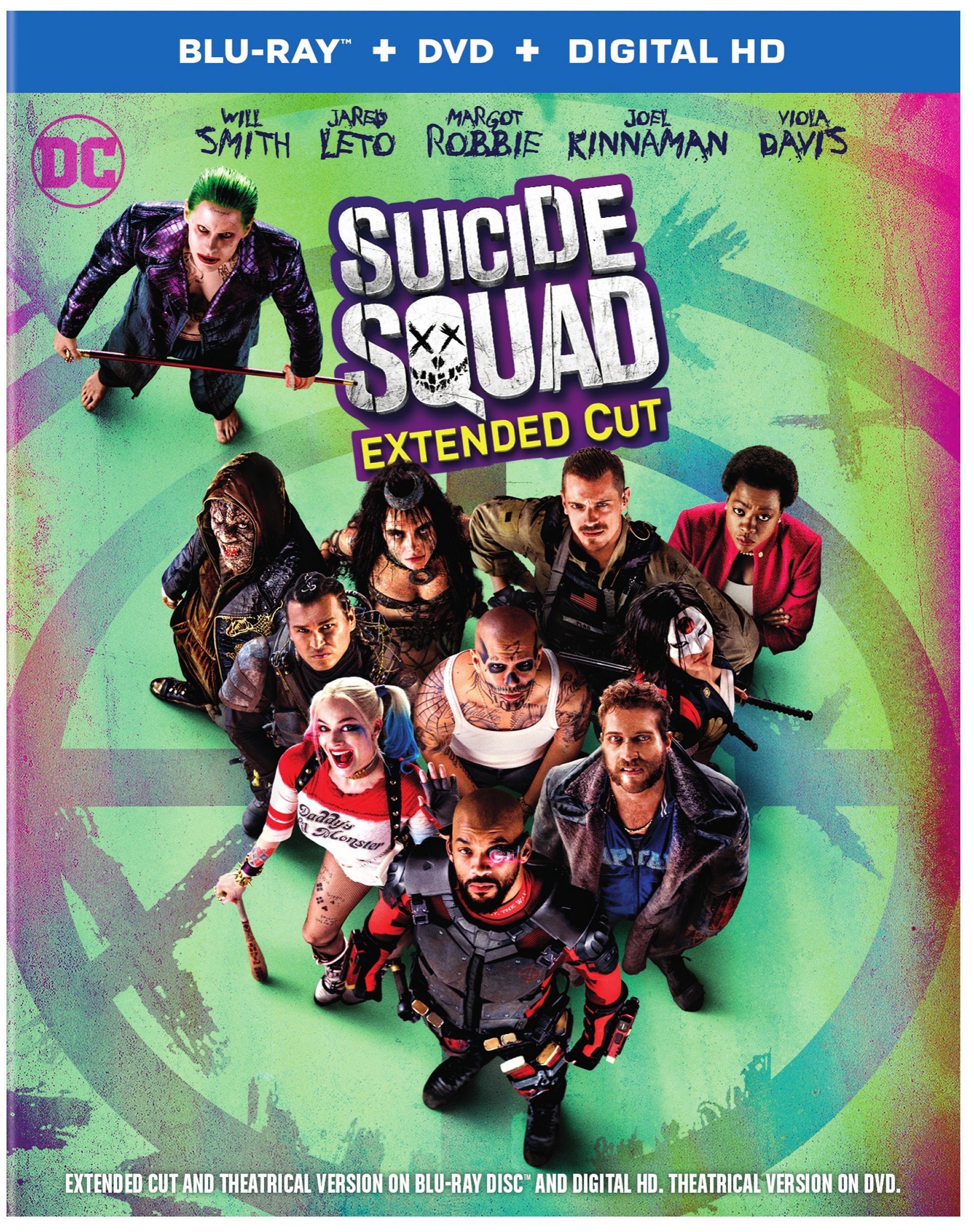 “Suicide Squad: Extended Cut” features more action and more Squad with 13 minutes of footage not previously seen in theaters. The Ultra HD Blu-ray, Blu-ray 3D Combo Pack and Blu-ray Combo Pack will include the extended version of the film on the Blu-ray disc. The extended version will also be available to own on Digital HD.

Additionally, for the first time ever, all of the special features can be experienced in an entirely new, dynamic and immersive manner on tablets and mobile phones using VUDU Extras+, the newest feature of the VUDU app, available for both iOS and Android devices.  Included with the theatrical cut of the movie when purchased from VUDU, VUDU Extras+ allows users to watch the movie and simultaneously experience synchronized content related to any scene, simply by rotating their device.  Synchronized content is presented on the same screen while the movie is playing, thus enabling users to quickly learn more about any scene, such as actor biographies, scene locations, fun trivia, or image galleries.  Also, users can share movie clips with friends on social media and experience other immersive content.  The VUDU app is now updated and available for download on the Apple app store, and will be updated later this week on Google Play.”

The Blu-ray discs of “Suicide Squad” will feature a Dolby Atmos® soundtrack remixed specifically for the home theater environment to place and move audio anywhere in the room, including overhead. To experience Dolby Atmos at home, a Dolby Atmos enabled AV receiver and additional speakers are required, or a Dolby Atmos enabled sound bar; however, Dolby Atmos soundtracks are also fully backward compatible with traditional audio configurations and legacy home entertainment equipment.

Additionally, Just in time for the home entertainment release of “Suicide Squad,” “Suicide Squad: The Album,” Atlantic Records’ massive musical companion to the Warner Bros. Pictures blockbuster, has skyrocketed in sales reaching platinum status by the RIAA for sales and streams in excess of 1 million equivalents. The soundtrack made history upon its explosive release this summer as the first soundtrack from a Warner Bros.-distributed film to debut atop the SoundScan/Billboard 200, entering at No. 1 with sales and streams in excess of 182,000 album equivalents – the highest debut for a soundtrack this year and the largest streaming week for a soundtrack ever with over 32 million streams. “Suicide Squad: The Album” is the only soundtrack to receive platinum certification in 2016.

It feels good to be bad… Assemble a team of the world’s most dangerous, incarcerated Super Villains, provide them with the most powerful arsenal at the government’s disposal, and send them off on a mission to defeat an enigmatic, insuperable entity. U.S. intelligence officer Amanda Waller has determined only a secretly convened group of disparate, despicable individuals with next to nothing to lose will do. However, once they realize they weren’t picked to succeed but chosen for their patent culpability when they inevitably fail, will the Suicide Squad resolve to die trying, or decide it’s every man for himself?

Today, “Suicide Squad” is available to own for streaming and download to watch anywhere in high definition and standard definition on favorite devices from select digital retailers including Amazon, CinemaNow, Flixster, iTunes, PlayStation, , Xbox and others. On December 13, “Suicide Squad” will be made available digitally on Video On Demand services from cable and satellite providers, and on select gaming consoles.

Rating: Rated PG – 13 for sequences of violence and action throughout, disturbing behavior, suggestive content and language

About DC Entertainment:
DC Entertainment, home to iconic brands DC (Superman, Batman, Green Lantern, Wonder Woman, The Flash, etc.), Vertigo (Sandman, Fables, etc.) and MAD, is the creative division charged with strategically integrating across Warner Bros. and Time Warner. DC Entertainment works in concert with many key Warner Bros. divisions to unleash its stories and characters across all media, including but not limited to film, television, consumer products, home entertainment, and interactive games. Publishing thousands of comic books, graphic novels and magazines each year, DC Entertainment is one of the largest English-language publishers of comics in the world.