FAN FAVORITE ‘BELIEVE ME’ FROM

Movie Cheered by Faith-Film Fans . . . and The New York Times? 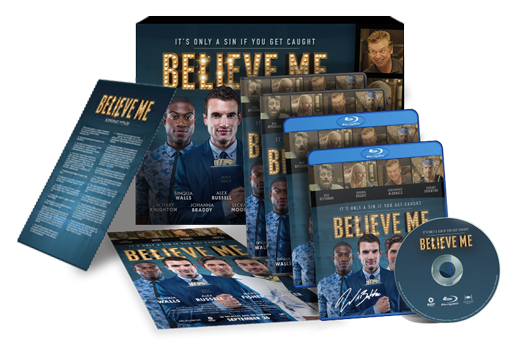 AUSTIN, Texas – Feb. 18, 2015 – BELIEVE ME—the hilarious and affectionate parody of America’s Evangelical Christian subculture—debuts on DVD March 3. In its limited theatrical release last fall, BELIEVE ME caught the eye of The New York Times and developed a dedicated fan base among Christians, who made the movie a staple on multiple on-demand outlets across North America.

“The DVD takes BELIEVE ME to a wider audience where we know it will continue to connect, amuse and challenge,” said Director Will Bakke. “Audiences relate to BELIEVE ME because they see it played out every day. It’s a knowing parody of the power you get just by standing on stage with a microphone—whether you’ve earned that power or not.”

The New York Times called BELIEVE ME  a “smart, sly comedy . . . with its heart on its sleeve and its jokes above the belt. The film’s congeniality, however, in no way dulls its humor or the sharpness of its observations.”

The skill to make those sharp observations grows from the filmmakers’ own experiences. Bakke co-wrote the film with Michael B. Allen, and it was produced by Alex Carroll all of Riot Studios. Christians themselves, they are the team behind BEWARE OF CHRISTIANS, a college “road picture” documentary that followed the young men across Europe as they asked people how they viewed faith. The film became a cult favorite as the Riot crew barnstormed college campuses to screen it and sell DVDs.

Similarly, on the foundation of a small theatrical footprint, BELIEVE ME builds its dedicated fan base who are ambassadors for the film. And critics have taken note.

“A smartly made wonder.”
Relevant

“This Christian satire gets it right.”
CT—Christianity Today

The DVD is available at Walmart, Target and Amazon. Bonus features include the theatrical trailer, deleted scenes and outtakes. Suggested retail price is $14.99.

Sam Atwell stands on the stage as thousands of fans go wild.  Smart, charismatic, handsome, he moves them with his message, and when he calls for donations to his charity, the money pours in.

And by the way, Sam doesn’t believe a word he’s saying.

Just months earlier he was a typical college senior focused on keg stands, hookups and graduating. But a surprise tuition bill threatens his dream of law school and leaves him thousands of dollars in the hole. Convincing his three roommates they can make a killing exploiting the gullible church crowd, they start a sham charity and begin campaigning across the country, raising funds for a cause as fake as their message.

But Sam’s got girl problems. He cares about Callie, the tour manager, who actually believes what he’s saying. When Callie discovers where the money is going, it’s Sam’s moment of truth.

On the final night of the tour, before a packed auditorium but alone in the spotlight, it’s time for Sam Atwell to figure out what he really believes.

BELIEVE ME is produced by Alex Carroll and co-produced by Sandhya Shardanand, Gary Cogill, Richard Toussaint and Steve Markham. John Rutland is director of photography with casting by J.C. Cantu.