Presented In 650 Select U.S. Cinemas for Only One Night 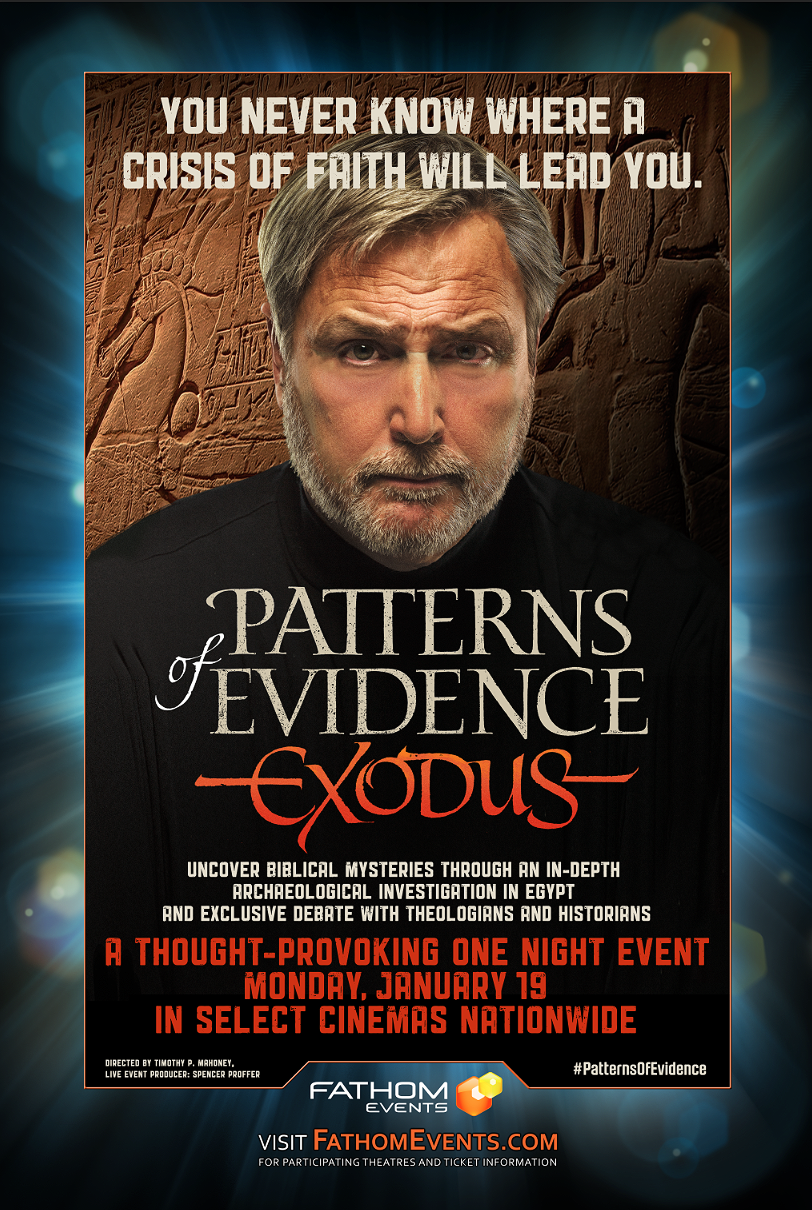 DENVER – January 13, 2015 – Fathom Events and Thinking Man Films presentation of “Patterns of Evidence: The Exodus” has confirmed the expert panel to conduct a Q&A regarding new discoveries about the Exodus revealed in the film.  Presented in 650 select U.S. cinemas, the one-night event will take place on Monday, January 19 beginning at 7:00pm local time.

Filmmaker Tim Mahoney states, “We are thrilled that such a distinguished and respected group has been assembled for the post-screening Q&A.  I feel anyone with a passion for history, culture or religion will not only enjoy ‘Patterns of Evidence: The Exodus,’ but the discussion to follow as well.  What started out as a crisis of my own faith led me on an incredible 12 year journey of discovery.  I feel the film presents compelling, newly recognized patterns of evidence for the biblical exodus.  We interview top historians and archeologists in the field on all sides of the issue and allow the viewer to draw their own conclusions.”

Executive Producer David Wessner adds, “This story is the origin story for not only Judaism and Christianity but also for the moral, ethical and judicial dimensions of western civilization. Whether it happened or not has immense implications for both personal and civil reasons. This is why we are so passionate about this film.”

“Patterns of Evidence: The Exodus” is an award-winning documentary by filmmaker Timothy Mahoney that chronicles an in-depth archaeological investigation in Egypt as his team attempts to corroborate the biblical text. The film explores one fundamental question:  Is there any evidence that the Exodus story actually happened? Twelve years in the making, this provocative documentary reveals new or rarely seen evidence regarding the Israelites’ descent into slavery, their Exodus from Egypt and their ultimate conquest of the Promise Land.  Although many scholars and archaeologists deny the validity of the Exodus story for lack of proof, “Patterns of Evidence: The Exodus” builds a case that sheds new light on the story.

Tickets for “Patterns of Evidence: The Exodus” are available at participating theater box offices and online at www.FathomEvents.com.  The event will be presented in 650 movie theaters around the country through Fathom’s Digital Broadcast Network. For a complete list of theater locations, visit the Fathom Events website (theaters and participants are subject to change).

Media Producer Spencer Proffer brought the project to Fathom via Meteor 17 and serves as the event producer.

About Patterns of Evidence: Exodus (film)

What is the validity of history found in the Bible? Is it fact or fiction? What does the hard evidence really have to say about the foundational story of the Old Testament: the Exodus out of Egypt? “Patters of Evidence: Exodus” is an in-depth investigation by documentary filmmaker Tim Mahoney searches for answers to these questions amid startling new finds that may change traditional views of history and the Bible.

Encouraged by several scholars, Mahoney decided to take a scientific approach. He began to look for evidence of the Exodus story wherever it might be found in history. This path took him in a completely new direction challenging the traditional views about the ancient past and the Bible. Ultimately, he was forced to make a decision, whether to yield to the giants of archaeology and give up the investigation or stick with an amazing pattern of evidence that matched the sequence of events recorded in the Bible.  For more information about the film, please go to www.PatternsofEvidence.com.

Thinking Man Films and its publishing division, Thinking Man Media, are focused on creative development, production and distribution of engaging products for cinema, television, web and print.  The Company desires to gain a better understanding of significant and complex topics by exploring the world with those who are curious.  The company is led by Timothy Mahoney.