EXECUTIVE PRODUCERS ROMA DOWNEY AND MARK BURNETT REVEAL THE FIRST LOOK AT JESUS AND THE DIVERSE CAST OF THE NBC EVENT SERIES A.D. 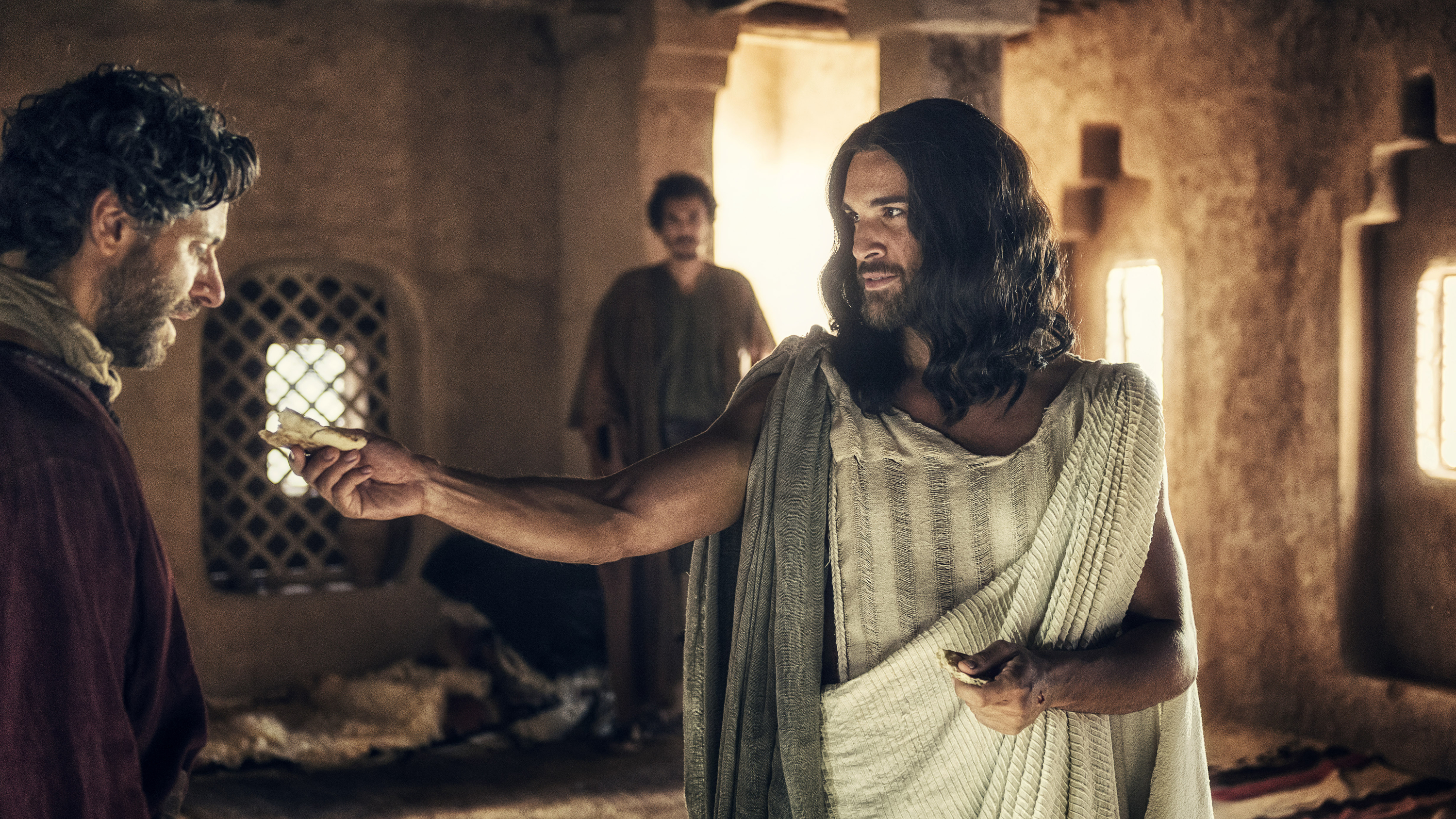 November 5, 2014 (Los Angeles, CA) – The original NBC series event A.D., the highly anticipated follow-up to the 2013 ratings blockbuster miniseries The Bible, which garnered over 100 million US viewers, today reveals Jesus and the complete cast from around the world. From executive producers Roma Downey and Mark Burnett, the first episode of A.D. will premiere Easter Sunday, April 5th, 2015.

“Christianity is among the most diverse movements in history, so when Mark and I looked to bring this epic story of A.D. to life on NBC, it was important to us to find a cast as diverse and beautiful as the church is around the world.” said Executive Producer Roma Downey. “We look forward to sharing these amazing performances with our audience, and in them we hope that people see themselves.”

A.D. is an uplifting and harrowing journey through the beginning moments of the birth of the church picking up where the smash hit, The Bible, left off.  A.D. follows the first ten chapters of the Book of Acts exploring the aftermath of Christ’s death and its profound impact on his disciples, his mother Mary, and key political and religious leaders of the era, an impact that would completely change the world.  A.D. will take its audience from the intense sorrow of Christ’s ultimate sacrifice to the awe-inspiring wonder of the Resurrection and deep into his disciples’ struggle to survive against opposition from every side as they continued to share his message of love with everyone, everywhere.

The series includes compelling context around the Biblical text, focusing initially on the Book of Acts while integrating dramatic history to help tell the full story of the people and their era.  The audience will enter the world of the Apostles, of Pilate, Caiaphas, Herod Antipas and others, all from their own points of view.  Each episode aims to bring the Biblical world to life in all of its grit and glory.

A broad range of faith leaders are already endorsing A.D.:

“Mark and Roma have delivered yet another tour de force to the small screen! This epic series brings all of the passion and dramatic story telling that audiences have grown to expect from this dynamic duo. A.D. is ‘must watch’ television at its finest!”

“Finally, someone has told the story of the birth of the church in all of its power, drama and glory.  A.D. masterfully shows why it is that Christianity emerged from nowhere to become the largest and most diverse religious movement in history. From the resurrection of Christ, to the Holy Spirit’s arrival at Pentecost, to the courage of the Apostles in the face of unrelenting persecution … it’s all here, like you’ve never seen it before. Mark and Roma have taken the Bible as it is, and shown the world why it is that people are still talking about Jesus.”

“AD is a triumph! It tells the riveting story of the very beginning of the Church with reverence, excitement and brilliance. This film not only captures our attention but also our hearts as we trace the steps of those who first walked in the way of Jesus. While AD dazzles the eye, it also engages the imagination. The narrative recounts how, with the guidance of the Holy Spirit, a small band of men and women witnesses to the Risen Lord set out to change the world. The mission endures today and people everywhere can find both drama and inspiration in this telling of the story of the Church, her origins, mission and timeless challenge. AD helps us recover the wonder of the ongoing Christian adventure.”

“A.D. is Biblically based, historically supported, and creatively integrated as an epic story that will captivate generations globally. This drama is powerful, engaging, and INTENSE!”

“I am so excited about what is coming with “A.D.” this Easter. We have seen the birth, life, and death of Jesus portrayed on screens before, but rarely have had the chance to see the effect and implications of those acts, nor the most amazing act of all: the resurrection of Jesus Christ! I suspect that A.D. will open our eyes in new and fresh ways to how God’s Holy Spirit is active in the world, and will help explain why the Church exists, why it is needed, and what it is all about: pointing the way to God the Father, through the resurrected Christ, empowered by the Holy Spirit. I can’t wait to see “A.D.” and to be inspired by what God did, and continues to do!”

“We’re excited about A.D. the new television series from our friends, Mark Burnett and Roma Downey, that tells the story of the birth and growth of Christianity.  These are the stories of those first believers who, in the face of persecution, persevered through faith, giving rise to the greatest movement of God the world has ever seen. We believe it’s going to stir people’s hearts as they discover that the gospel is still as relevant today as it was two thousand years ago, and we encourage everyone to watch and experience this powerful message of faith, sacrifice and victory.”

“In a time when films about Bible events are often gross distortions of what actually happened, you can always count on Mark Burnett and Roma Downey to stay true to the scriptures, treating miracles as actual miracles, and not trying to explain them away.  With a stellar track record of both The Bible television series and the Son of God movie, Mark and Roma are now bringing AD,  the exciting story of the Book of Acts,  to the screen as a gift to the entire church. God bless them. I can’t wait for you to see it!”

“There is much we can learn through the example of the first century believers. These believers modeled for us complete reliance on the Holy Spirit. Despite the constant threat of persecution, they pressed forward to reach the unreached with the message of the gospel.

I’m thrilled that Mark Burnett and Roma Downey will be telling the incredible story of the first followers of Christ on a global stage. I believe we are on the cusp of an unparalleled spiritual awakening. My prayer is that this series will ignite a passion for today’s believers to move forward with Spirit’s empowerment to spread the message of hope in Christ to a world desperate to know Him.”

“A.D. is a riveting, high stakes political thriller depicting the greatest revolution mankind ever experienced. Until now, this story was only left to our imagination. But with the incredible eye of Mark Burnett and Roma Downey, the story of God’s mission to the world erupts with intense drama, life or death tension and the gripping reality that the tectonic plates of history just shifted—leaving a small, countercultural band of followers asking, ‘Now what?'”

-Gabe Lyons | Founder, Q Ideas and Author, The Next Christians

“I am so proud of Mark Burnett and Roma Downey for casting a diverse group of actor and actresses in A.D. For far too long, biblical dramas have reflected a single face of Christianity; this is a bold, courageous move and one that will be enthusiastically received by the global Christian church.”

-Joshua DuBois | bestselling author of The President’s Devotional,and former director of the White House Office of Faith-based and Neighborhood Partnerships

“A.D. takes us back to the cradle of hope, the explosive days following the resurrection of Jesus Christ and the birth of the Church that bears His name. With their unique blend of cinematic brilliance and passionate faith, Mark Burnett and Roma Downey have once again gripped our hearts with the epic story of the carpenter who altered history and eternity.  A.D. brings us up close to Jesus’ death and triumph over the grave, and gives us a front row seat as the power of God’s Spirit transformed ordinary men and women into a Jesus movement that carries His grace and truth to a hurting world.”

“A.D. is truly breathtaking! For far too long, most people’s understanding of Christianity has stopped at the cross. A.D. takes us past the resurrection into the power of the Holy Spirit, and into the courage of the early church. The Gospel didn’t stop at the cross, it continued, and A.D. shows us in living color how that movement changed the world – and why it is still changing the world today. This television series is… historic.”

-Christine Caine | Founder, The A21 Campaign

“AD presents the story of not just surviving in the midst of adversity but more importantly, this television series exposes the meta narrative of the necessary power and faith to thrive against all odds. For after the cross, empty tomb and upper room, a small group of people who embraced the grace, love, truth, and faith of Jesus dared to do the impossible; they changed the world! “

A.D. shows us how a deep faith results in raw courage. The key players in this story–the earliest Christians, stunned by the brutal execution of Jesus, were pathfinders for today’s believers. Their compelling story gives hope for the modern-day faithful, who face brutality and persecution simply for believing…even today.”

“When I heard Mark and Roma share their vision to create a series from the Book of Acts I was excited beyond words. A.D. is our story. A.D. is the story of the church. Until now no one has attempted to capture on film the magnificent and epic tale of how a handful of marginalized Jesus followers ultimately changed the world. I can’t wait!”

Premiering on NBC beginning Easter Sunday 2015 (April 5th), families will be able to tune in to watch A.D. unfold for 12 consecutive Sundays culminating with the finale of season 1 on June 21st.  Churches and Faith organizations all across the country will be given the opportunity to teach through the Book of Acts in conjunction with the series and participate in Bible reading plans focused on the Book of Acts from Easter through Father’s Day.  For more information please visit:  ShareADtheSeries.com

Pilate – Vincent Regan (The Musketeers, Clash of the Titans, 300, Troy, Rescue Me)

Leah – Jodhi May (The Crimson Field, Defiance, The Last of the Mohicans, Ginger & Rosa)

Simon the Zealot – Fraser Ayers (The Bible, Son of God)

United Artists Media Group (UAMG) is a joint venture among MGM, Mark Burnett, Roma Downey and Hearst Corporation, focused on developing, producing and financing premium content across all platforms, including scripted and non-scripted television programs, motion pictures and digital content.  LightWorkers Media is the faith and family division of UAMB.