For A Limited Time Through Disney Movies Anywhere 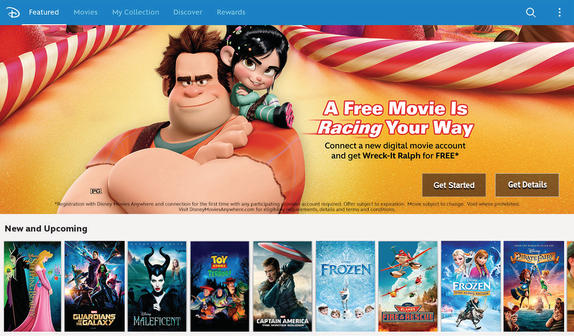 Content Distribution.   “We set out to create an exceptional Disney experience that made owning digital movies easy and fun, and with Google Play now on board following our successful launch in February, we are able to deliver unprecedented availability and ease for consumers across a broad range of mobile devices.”

“We want to make it easy for movie fans to enjoy all of their past and future digital purchases across all of their devices. Our partnership with Disney now gives Google Play users the ability to conveniently watch all of their Disney, Marvel and Pixar digital movies that have been purchased from any Disney Movies Anywhere participating retailer,” said Jonathan Zepp, head of Google Play Movies partnerships.

In Disney Movies Anywhere, consumers can explore Disney’s library of over 400 active digital titles from Disney, Pixar, and Marvel; preview upcoming offerings and enjoy hours of free new and exclusive short-form content; and discover curated content based on their individual preferences. In addition to browsing titles available for purchase, consumers can redeem Digital Copy codes found in Disney, Pixar, and Marvel Blu-rays and DVDs directly in Disney Movies Anywhere, as well as earn Disney Movie Rewards points for digital purchases.

For a limited time, Disney Movies Anywhere users who connect a new participating retailer account will receive a free digital copy of Disney’s hit animated film “Wreck-It Ralph.” The launch of Disney Movies Anywhere on Google Play also coincides with the release of “Maleficent,” one of the year’s biggest hits, and Disney’s animated “Planes: Fire & Rescue,” both out on digital and Blu-ray today.

About The Walt Disney Studios

For over 90 years, The Walt Disney Studios has been the foundation on which The Walt Disney Company was built. Today, the Studio brings quality movies, music and stage plays to consumers throughout the world. Feature films are released under the following banners: Disney, including Walt Disney Animation Studios and Pixar Animation Studios; Disneynature; Marvel Studios; Lucasfilm; and Touchstone Pictures, the banner under which live-action films from DreamWorks Studios are distributed. The Disney Music Group encompasses the Walt Disney Records and Hollywood Records labels, as well as Disney Music Publishing. The Disney Theatrical Group produces and licenses live events, including Disney on Broadway, Disney On Ice and Disney Live!

Google Play is an online store with millions of digital songs, movies, TV shows, apps, games, books and more. Google Play Movies & TV offers new release movies, classic films and next day TV shows that you can rent or buy in HD or SD and watch on any device, Android, iOS or your computer.