‘WHEN THE GAME STANDS TALL’

Calling Out the Higher Purpose of Football 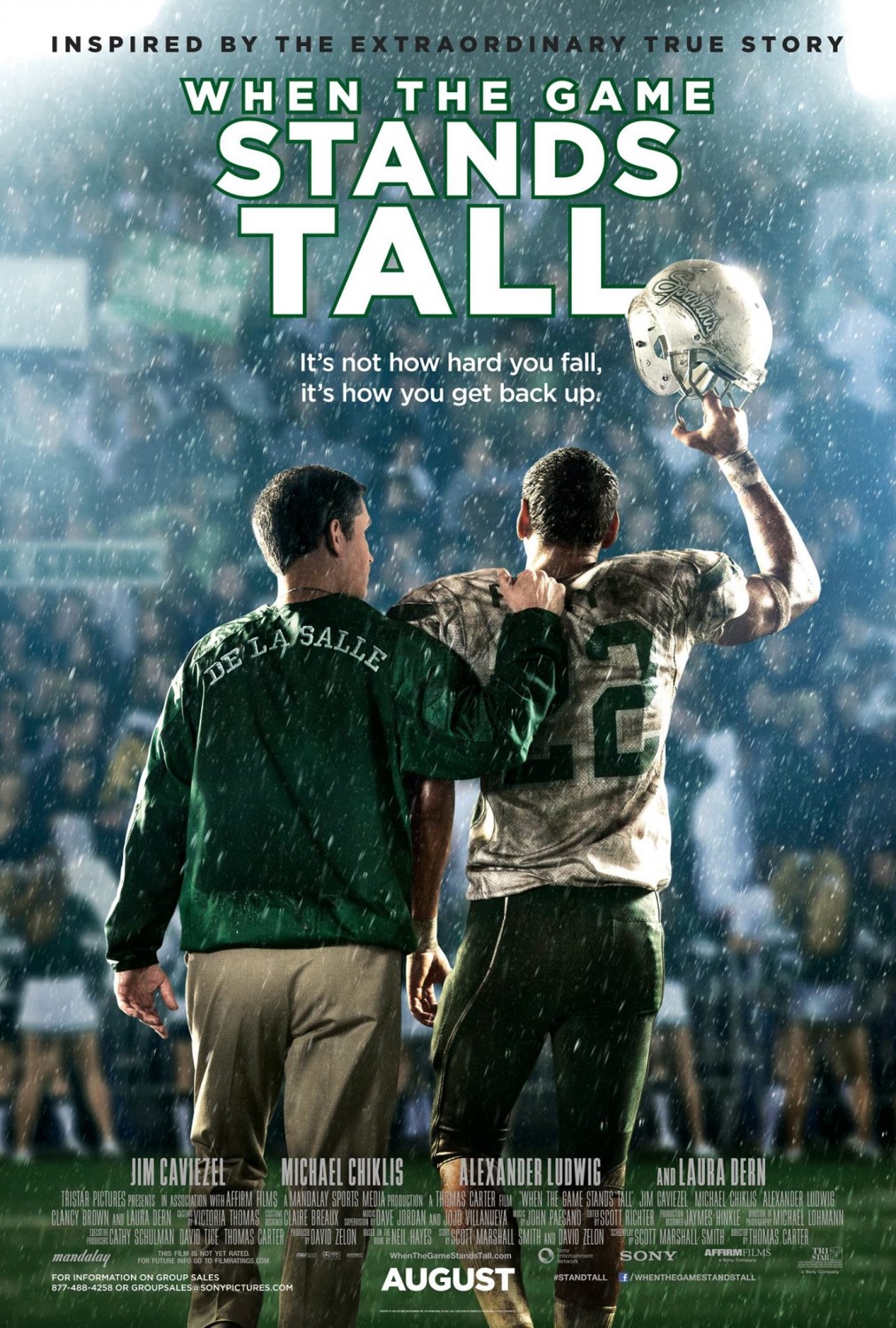 LOS ANGELES, Calif. – Sept. 5, 2014 – From sports legends, to coaches, to entire sports teams excitement and praise continue to roll in for WHEN THE GAME STANDS TALL in theaters nationwide now.

Across the country as football season gets into full swing, jersey-clad teammates are seeing WHEN THE GAME STANDS TALL together. The film features Jim Caviezel (THE PASSION OF THE CHRIST, Person of Interest) as Coach Bob Ladouceur, who led his De La Salle High School Spartans to the nation’s longest win streak with a focus on commitment, character and giving a “perfect effort.”

“Coach Lad’s” teams posted a 151-game win streak that shattered all previous national records. Yet their toughest challenge was overcoming loss and tragedy to “stand tall.” Inspired by a true story, WHEN THE GAME STANDS TALL is a film about brotherly commitment besting adversity that inspires audiences of all ages.

TEAMS TACKLE THE MOVIE
Among many professional and college football teams that have attended WHEN THE GAME STANDS TALL are:

WHAT THE LEGENDS ARE SAYING
“All are going to stand up and cheer for this powerful film.”
Bobby Bowden
Former head football coach, Florida State University
Winningest coach in college Division 1 football history

“A great movie. I would recommend this movie to all parents whose kids participate in sports.”
Jerry West
NBA Legend

“As a player, you will long to have the opportunity to be involved in a program like that. The responsibility and accountability of the players was amazing. As a coach, the leadership, motivation and character he displays should encourage coaches and leaders all over to strive for the same.”
Tim Brown
1987 Heisman Trophy winner

THEATER EVENTS NATIONWIDE
Among many, many events across the country drawing coaches and players to share the experience are:
• In Bonaire, Ga., Fellowship of Christian Athlete leaders took over 140 students to the film. Inspired high school seniors joined a “Perfect Effort” mentoring program to mentor juniors in their school.
• In College Station, Texas, all four area high schools bought out screenings with more than 1,000 players, coaches and fans attending.
• At San Jose State University, hundreds of college and high school athletes watched the film at an FCA-sponsored event.
• A church in Clackamas, Ore., took 175 football players to the film.
• More than 100 players and coaches from Grant High School in Portland, Ore. saw the film together.

“This is a film that can change your attitude about life,” said Caviezel. “It’s in the tradition of the great sports films that inspire us and touch people in a way that makes their lives better.”

SYNOPSIS
Inspired by the true story of De La Salle High School Coach Bob Ladouceur (Caviezel) and his Assistant Coach Terry Eidson (Chiklis), WHEN THE GAME STANDS TALL shows an underperforming team transformed by Coach Lad’s focus on players who share big goals for sport and life and hold each other accountable to give their best effort every play. The result was a record-breaking 151-game, 12-year winning streak. But when tragedy and loss strike, will the principles that built such success be enough to sustain Coach Lad and his players?

WHEN THE GAME STANDS TALL is produced by David Zelon, who also produced the hit film SOUL SURFER, the inspirational, true story of Bethany Hamilton whose faith helped her return to championship-level surfing after losing an arm in a shark attack.