“This is an entertaining, inspirational movie more and more people

are going to fall in love with in the days ahead.” 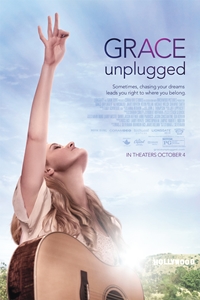 (FOR IMMEDIATE RELEASE) LOS ANGELES (Oct. 8, 2103) – Lionsgate/Roadside Attraction’s GRACE UNPLUGGED was embraced by audiences all across the country over the weekend, earning a coveted A- Cinemascore rating, qualifying it as a crowd-pleaser worthy of being mentioned in the same breath as faith-based film successes like SOUL SURFER, COURAGEOUS and FACING THE GIANTS. The rating, taken from filmgoer surveys, matched the mark audiences gave GRAVITY, which set a box-office record for an October film opening over the weekend.

Social media sites like Twitter and Facebook lit up Friday, Saturday and Sunday with praise for GRACE UNPLUGGED, with thousands tweeting and posting not only how much they loved the movie, its topical story and its music, but also how in many instances it drew families closer together.

“Word of mouth is extraordinary on this film,” said Howard Cohen, Roadside’s co-chair, “and we’re hopeful it translates into box-office momentum. This is an entertaining, inspirational movie more and more people are going to fall in love with in the days ahead.”

GRACE UNPLUGGED tells the story of Grace Trey (AJ Michalka), who has just turned 18 and aspires to do more than sing in her church’s worship band, which is led by her father, Johnny Trey (James Denton), a one-time pop star who gave up his life in secular music when he became a Christian. Grace longs to escape his shadow and make a name for herself singing songs about something other than God, but Johnny warns her that fame is not as glamorous as it looks and reminds her that serving and worshipping God with the talent she’s been given is a far more worthwhile goal

When Johnny’s former manager, Frank “Mossy” Mostin (Kevin Pollak), shows up 20 years after the two parted ways to offer him another shot at the big time, Johnny declines the opportunity. But Grace takes it – without telling her parents. She records a cover version of her father’s old Top 10 hit, runs away to Los Angeles and, under Mossy’s guidance, begins to taste the kind of success she’s always dreamed of.  But with each rung of the ladder she climbs, Grace feels pressure to compromise her Christian values and learns not everyone who says they’re on her side really is. The one exception is Quentin (Michael Welch), an intern at her record company and a fellow Christian who urges Grace to reassess her choices and put God first again in her life. Will everything she experiences lead her to reject her faith . or rediscover it?

In addition to its stellar Cinemascore and strong performance in exit polls, the film garnered a 91 percent “fresh” rating from filmgoers from Rotten Tomatoes and a “Must Go!” mark from Fandango. It took in about $1 million on about 500 screens in its first weekend, making it the fourth-highest-grossing new film to hit theaters.
“All of the texts, emails and phone calls I received this weekend from people who saw the film commented that parents and children need to see this movie,” Cohen said. “And I’m not just talking about Christians, either. People of all faiths – and non-churchgoers – are recognizing what a special film GRACE UNPLUGGED is.”