A Portion of the Proceeds from Roebuck Media’s Inspirational Film About Abused and Neglected Children Benefit Royal Family KIDS, Inc., a 501 (c) (3) 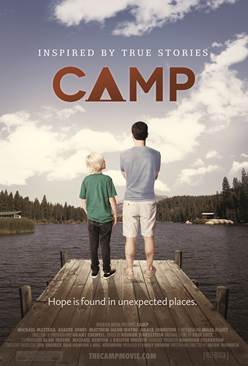 Nashville, TN – (June 28, 2013) – Word Films announces the August 27 nationwide DVD release of the inspirational film “CAMP.” Inspired by true stories from camps for abused and neglected children, the film’s writer and director, Jacob Roebuck, tapped into real-life events to acknowledge the power of the camp experience and the opportunity it provides to give unconditional love to those seemingly forgotten children who need adults in their lives.

“CAMP” is the story of a deeply troubled boy, Eli (Miles Elliot, “The Mentalist”), and an apathetic investment advisor, Ken (Michael Mattera), who get paired together at a summer camp for foster kids and discover the meaning of unconditional love. “We are excited for the opportunity to share the story of CAMP,” said Roebuck. “We want to entertain audiences, but we also hope they are inspired to get involved in the lives of abused and neglected kids in their communities. We are thrilled to work with Word on the video distribution of the picture. Not only do they bring a first-class distribution team for mainstream and Christian markets, they also understand the heart behind the film.”

This inspirational film has received outstanding early acclaim from critics in addition to the Dove Foundation’s “Family-Approved” Seal:

“This is a wonderful film about healing the wounds of your past… We are pleased to award this movie our Dove ‘Family-Approved’ Seal for ages 12 and over.”  – The Dove Foundation

“Most of the time, movies and television shows spotlight the lighter side of youth camps, but CAMP goes deeper to bring viewers face-to-face with the transformation that happens in the lives of children and even the adults that volunteer. It is incredibly heart affecting, even through the real-life interviews that play during the credits.”  – DeWayne Hamby (Christian Retailing, White Wing Messenger)

“Hollywood loves to entertain us. But CAMP does more than entertain – it inspires. It beautifully illustrates the huge impact the small sacrifice of a week’s time can make in the life of a child in foster care.” – Julie Gumm, best-selling author of “Adopt without Debt”

Roebuck received inspiration for the film when he joined a summer missions trip and had the opportunity to help abused and neglected children through a program called Royal Family Camp. Once there, he felt the call to help the children he met that so desperately needed contact with loving and caring adults. A portion of the proceeds from the film benefit Royal Family KIDS, Inc., a 501 (c) (3) non-profit that serves as the nation’s leading network of camps for abused, neglected and abandoned children.

The film is rated PG-13 and has a running time of 111 minutes. For more information about “CAMP,” Royal Family KIDS, Inc. and for a listing of upcoming engagements visit: www.campthemovie.com.