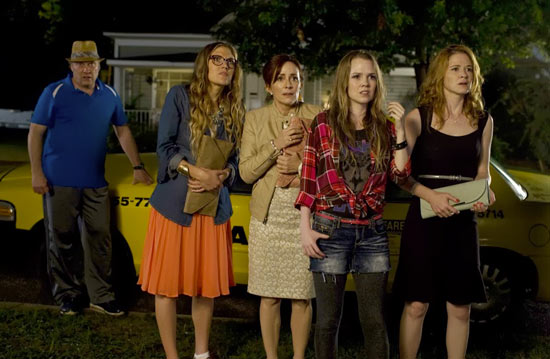 BIRMINGHAM, ALA. – June 24, 2013 – Principal photography has wrapped on MOMS’ NIGHT OUT, the hilarious family comedy produced by Kevin Downes to be distributed by AFFIRM Films and Provident Films. A film that celebrates real family life—where everything can go wrong and still turn out all right.

“We wanted to make a film that the whole family could enjoy,” said Downes, who also acts in the movie.

In the film, all Allyson and her friends want is a peaceful, grown-up evening of dinner and conversation . . . a long-needed moms’ night out. But in order to enjoy high heels, adult conversation and food not served in a bag, they need their husbands to watch the kids for a few hours—what could go wrong? MOMS’ NIGHT OUT is an endearing, true-to-life family comedy.

“I feel like everything in the script happened at my home last week,” said Jon Erwin, who co-wrote MOMS’ NIGHT OUT with Andrea Nasfell and co-directed with his brother Andrew. The Erwin Brothers have four toddlers between them. “It’s a light-hearted look at the joys and challenges moms and dads face today, giving all the time kids need while still finding time for each other.”

Coming to theaters in 2014, MOMS’ NIGHT OUT chronicles one night out gone awry, as three harried moms, their husbands, a sister-in-law with a misplaced baby, a tattoo parlor owner, a motorcycle gang and one bewildered cabbie learn to embrace the beautiful mess called parenting.

“We grew up watching great family comedies,” said Andrew Erwin. “We felt it was time to bring the genre of clean family comedy back to the big screen, and we brought a powerful comedic cast with us to do it.”

MOMS’ NIGHT OUT also loops in a little wholesome passion between a wife and her husband, played by Grey’s Anatomy’s Sarah Drew as Allyson and Sean Astin as Sean.

“I love that the film is not just a comedy but also a love story between Allyson and Sean,” Drew said.

MOMS’ NIGHT OUT spotlights the unfulfilled expectations and serial self-doubts many moms feel . . . then reassures us that the key is raising kids in a loving home.

“I’m excited to be a part of the group of women in a comedy that is reality for families everywhere,” said Everybody Loves Raymond and The Middle star, two-time Emmy winner and mom of four Patricia Heaton from the MNO set. “I’ve had so many people come up to me over the years and say, ‘Your show got us through a very difficult time in our family and raised our spirits.’ I think sometimes in a family the only way to diffuse a tense situation is to make a joke or mock yourself or the situation. At some point you just have to laugh about it. That’s what we hope will happen with MOMS’ NIGHT OUT.”

Heaton is an executive producer on the film along with her husband, David Hunt, who joins her onscreen as well, playing a local cabbie caught up in the fun.

“Any dad will tell you that love and laughter often lift families over the everyday challenges of life,” Hunt said. “And with MOMS’ NIGHT OUT the entire family—moms, dads and kids—will laugh together.”

This anticipated second feature film from Andrew and Jon Erwin follows on the buzz created by their 2012 hit OCTOBER BABY that surprised the film industry with a No. 8 box office debut against big-budget competition and drew page 1-A coverage in The New York Times. 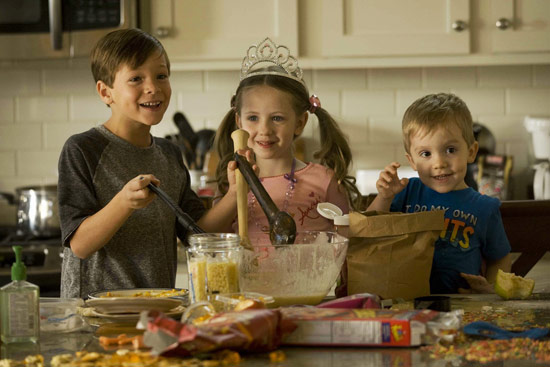 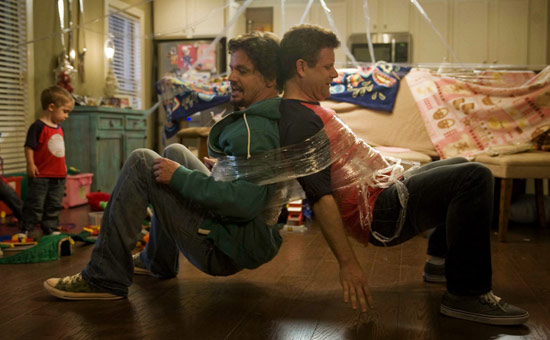 Sean Astin (right) and Kevin Downes get all wrapped up in the joys—and challenges—of parenting in the hilarious, new family comedy MOMS’ NIGHT OUT.
Photo: Saeed Adyani