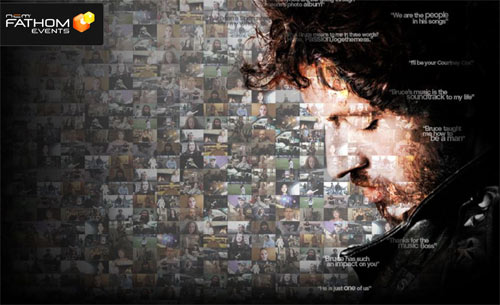 Centennial, Colo. – June 17, 2013 – With more than 120 million albums sold worldwide and numerous awards, including a staggering 20 Grammy Awards®, Bruce Springsteen’s music defines a generation. In celebration of 40 years of iconic music, NCM Fathom Events and Arts Alliance Media present “Springsteen and I” in select U.S. movie theaters on Monday, July 22 and Tuesday, July 30 at 7:30 p.m. local time. “Springsteen and I” will take audiences on an emotional journey through the personal insights and reflections of their fellow Springsteen fans. Directed by Baillie Walsh and produced by Ridley Scott Associates and Mr. Wolf, “Springsteen and I” incorporates the efforts of more than 2,000 fans around the world who submitted personal video clips to make the ultimate collective filmmaking experience about how Springsteen and his music became the soundtrack to so many lives.

Including Springsteen performing some of his greatest hits and exclusive never-before-seen archival concert footage, the cinema event features unreleased big-screen performance highlights from the London Hard Rock Calling Wrecking Ball tour and a behind-the-scenes fan meet-and-greet with their hero.

“This beautifully crafted film provides a unique insight into the powerful bond between a recording artist and those who connect so profoundly with his music,” said Ridley Scott.

“Springsteen and I” will be presented in nearly 500 select movie theaters around the country through NCM’s exclusive Digital Broadcast Network. Tickets are available at participating theater box offices and online atwww.fathomevents.com. For a complete list of theater locations and prices, visit the NCM Fathom Events website (theaters and participants are subject to change).

‘Springsteen and I’ is totally unique – audiences have never seen Bruce and his influence presented like this before,” said Dan Diamond, senior vice president of Business Development for Fathom Events. “This Fathom Event is a rare opportunity for fans to gather together in movie theaters, experience and share their love of all things ‘Bruce’ – as it was produced by the fans, for the fans.”

Founded in 2012 by Alfred Chubb with Arts Alliance Ventures, Mr Wolf produces and finances live events and music based feature films for worldwide distribution on all formats. Mr Wolf launched with the release of Andrea Bocelli: Love in Portofino on Valentine’s Day and Mother’s Day, produced by PBS, Universal Music and Sugar Entertainment and is following up with the release of Springsteen & I, the Ridley Scott Agency-produced Bruce Springsteen feature, in July 2013.

Founded by Ridley and Tony Scott in 1968, RSA Films has, for more than 40 years, been one of the world’s leading commercial production companies.  Headed by President Jules Daly, RSA is at the forefront of creating innovative groundbreaking advertising campaigns for some of the world’s most recognized brands.  Headquartered in Los Angeles, with offices in New York, London, and Shanghai, RSA has a roster of over 80 directors, including Kathryn Bigelow, Martin Scorsese, Sam Mendes, Joe Carnahan, Steven Klein and Neill Blomkamp. RSA has received numerous Golden Lion, Emmy, BAFTA, AICP, Cleo, MTV and MVPA Awards since its inception.

Arts Alliance Media, based in London with offices in Paris, Amsterdam, Barcelona, Oslo, Milan and Berlin, is the worldwide leader in digital cinema, offering a complete range of services, as well as VPF financing solutions for digital conversion.

These services include installation, maintenance and support for digital cinema systems; world-class software solutions; management and delivery of content to cinemas; and alternative content and live events. AAM has European Virtual Print Fee (VPF) agreements in place with all six Hollywood studios and has signed over 3,850 VPF screens in multiple territories, including with many leading exhibitors. The company recently activated its Latin American VPF programme with a raft of exhibitor signings in the past weeks.  AAM’s digital cinema software currently touches approximately 15,000 screens worldwide.

The London-based Network Operations Centre supports over 5,500 digital screens around the world, and  the company’s digital cinema lab has mastered over 2500 titles to date, and shipped hundreds of thousands of DCPs. AAM’s strategic partnership with Arqiva allows exhibitors to benefit from satellite delivery of content to cinemas. Arts Alliance Media was founded in 2003 by Thomas Høegh.