Remake Of Classic Movie To Be Made in Katy, Texas 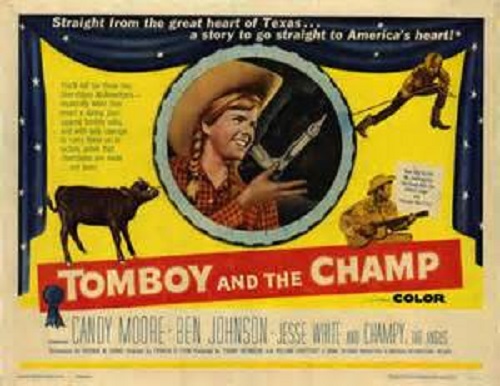 Katy, TX (April 19, 2013) Beth Roose Films is in the pre-production planning phase on the remake of the classic family film, “Tomboy and the Champ”.

Beth Roose, a Katy, TX resident who is CEO of Beth Roose Films, the company that will film the movie on location in Katy. The film will star Ben Johnson, Candy Moore and Jesse White, the original movie was released in 1961 and was also filmed in Katy.

“I just couldn’t resist the fun of doing a remake of this classic family film,” stated Roose, who will work with veteran actor Edward Faulkner to direct the made-for-TV movie.

Faulkner may be remembered from his acting roles in various John Wayne and Elvis Presley movies. Faulkner is also taking on the role of Uncle Jim in the “Tomboy and the Champ” remake.

New young film actress Eden Wood has been chosen for the lead role of Tommie Jo in the remake, which in addition to Faulkner, also features Don Collier of “High Chapparal” fame, as a reporter, Gospel singer Ian Owens as a minister and Lee Merriweather, an actress known for her many television roles as well as portraying Catwoman in the “Batman” series, in the role of Aunt Sara.

Safe for the family as “heartwarming family entertainment,” the remake focuses on life on a small East Texas ranch and the touching story of Tommie Jo’s devotion to her pet Angus steer.

According to Roose, filming is scheduled to begin at the end of August, and plans are to use Katy residents to fill minor roles as well as serve as film extras.”We also plan to use the local FFA chapter as they did in the original film, and I look forward to re-creating many of the original scenes…. especially the parade, which included the Katy High School band, cheerleaders and football team.”

Roose said she and her crew will be working closely with the Mayor’s Office to secure permits, as well as local community participation.

Roose said she was inspired to create positive, family-friendly films to try and counter some of the negative cartoons that today’s kids are subjected.

“It is not unusual to hear and watch negative, disrespectful and rude characters and story lines,” she said. “I strongly believe that families are searching for positive story lines [in today’s cartoons and films]. That’s why I branched out to do the remake of a family-friendly classic film.”

In addition to “Tomboy and the Champ,” Beth Roose Films plans to make another family movie, “Whirlwind,” based on the book by Alison Hart.

Scott Godsey and Associates are producing both the “Tomboy and the Champ” and “Whirlwind.”

In addition to the movies Roose and company are currently working on two music videos. One is titled “Christmas Needs Love to be Christmas” and features both Ian Owens and Eden Woods. The second is titled “Soul’d Out: Never Give Up.” Both are being produced by Scott Godsey and Associates.

Beth Roose Films can be contacted at http://bethroosefilms.com/ or https://www.facebook.com/ElfSparkle .

About Beth Roose Films
Creativity on film would pretty well describe Beth Roose Films.
Beth Roose has taken a unique approach to reaching out to kids and families today. With the help of some celebrity stars, and some Gospel singers Beth is reaching millions with a positive message by using characters like Elf Sparkle and Jimmy Paul The Pug Tooth Fairy.

About Godsey and Associates
In the last quarter of 2011, Scott Godsey started a team making music videos for Christian artists. That soon developed into not only working inside the Christian music business, but going outside of the Christian music world. Soon after, the company expanded into other genres. G&A started working with churches, authors, and organizations. The Godsey & Associate formula works with any company that wants to focus on brand building and getting in front of an audience.