**FROM THE CREATORS OF HOW TO TRAIN YOUR DRAGON**

DREAMWORKS ANIMATION’S MAGICAL AND CRITICALLY-ACCLAIMED ADVENTURE, RISE OF THE GUARDIANS, DEBUTS ON BLU-RAY™ AND DVD 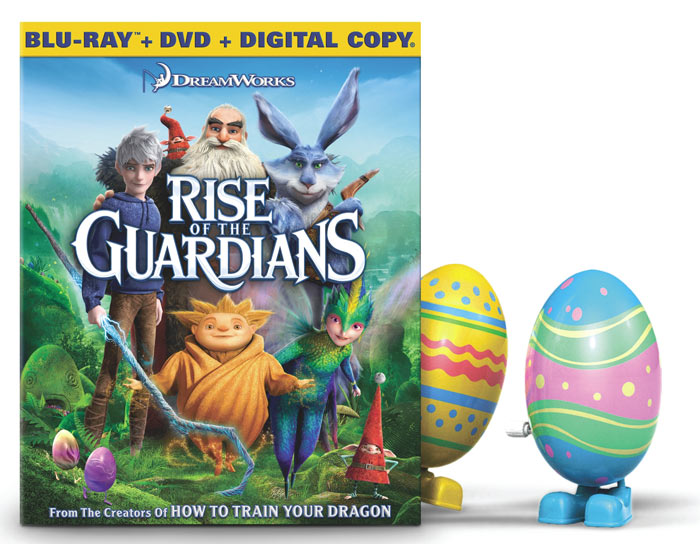 HOLLYWOOD, CA (February 13, 2013) – Praised by critics and moviegoers of all ages, DreamWorks Animation SKG, Inc.’s (Nasdaq: DWA) spectacular and heartfelt adventure RISE OF THE GUARDIANS soars onto  Blu-ray, Blu-ray 3D™ and DVD on March 12, 2013.  Hailed as “brilliant” and “the best family film of the year” (Joel Amos, MovieFanatic.com) with “spellbinding power” (James Verniere, Boston Herald) and “dazzling animation” (Tom Long, Detroit News), RISE OF THE GUARDIANS received outstanding audience reactions and a coveted ‘A’ Cinemascore.  DreamWorks Animation’s newest animated adventure has captured the imagination of audiences worldwide with a fun-filled and magical story about the legendary guardians—Jack Frost, the Easter Bunny, Santa Claus, the Tooth Fairy and Sandman—together for the first time!  When the evil Pitch threatens to take over the world, it’s up to our beloved heroes to protect the hopes and dreams of children everywhere.  Filled with non-stop action and laughs, it’s a dazzling family film that’s being hailed as “an instant classic” (Nancy Jay, Daybreak USA).

Just in time for Easter, RISE OF THE GUARDIANS will be available in a Blu-ray + DVD + Digital Copy Pack with UltraViolet™ or single-disc DVD, each of which includes two delightful hopping toy eggs inspired by the ones seen in the film (while supplies last—quantities are limited).  The combo pack and single-disc DVD also include special features that take viewers behind-the-scenes to learn more about the magic used to bring the story to life.

Featuring an all-star cast of voice talent including Chris Pine, Alec Baldwin, Hugh Jackman, Isla Fisher and Jude Law, RISE OF THE GUARDIANS delivers humor, adventure and exceptional entertainment that the whole family can enjoy.  The film will also be available on March 12th in a three-disc Blu-ray 3D + Blu-ray + DVD + Digital Copy Pack with UltraViolet and for digital download on February 26th.

Same as Blu-ray contents listed above

Same as DVD contents listed above

UltraViolet is a new way to collect, access and enjoy movies.  With UltraViolet, consumers can add movies to their digital collection in the cloud, and then stream or download them – reliably and securely – to a variety of devices.

DreamWorks Animation creates high-quality entertainment, including CG animated feature films, television specials and series and live entertainment properties, meant for audiences around the world. The Company has world-class creative talent, a strong and experienced management team and advanced filmmaking technology and techniques. DreamWorks Animation has been named one of the “100 Best Companies to Work For” by FORTUNE® Magazine for five consecutive years. In 2013, DreamWorks Animation ranks #12 on the list.  All of DreamWorks Animation’s feature films are produced in 3D. The Company has theatrically released a total of 25 animated feature films, including the franchise properties of Shrek, Madagascar, Kung Fu Panda, How to Train Your Dragon and Puss in Boots. The Company’s theatrical releases for 2013 are The Croods on March 22, Turbo on July 19 and Mr. Peabody & Sherman on November 1.