“Undefeated is a must see!”

FROM ANCHOR BAY ENTERTAINMENT and THE WEINSTEIN COMPANY:

A TRUE STORY OF HARD KNOCKS AND OVERCOMING OBSTACLES THAT WILL LIFT YOUR SPIRITS, THE 2011 OSCAR®-WINNING DOCUMENTARY

A Rousing And Inspirational Film About An Underdog Football Team And The Coach That Helped Them Realize Their Dreams, Undefeated Hits The Field 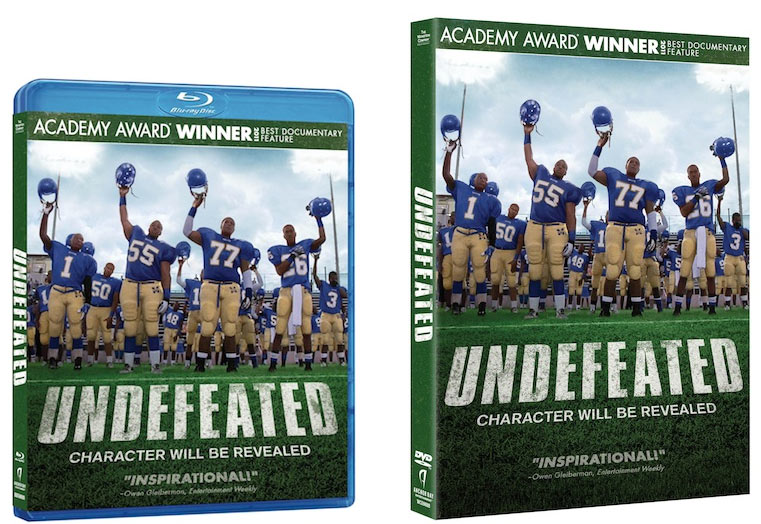 BEVERLY HILLS, CA – Anchor Bay Entertainment and The Weinstein Company announced today the Blu-ray™ and DVD release of the uplifting Oscar®-winning football documentary, UNDEFEATED, a directorial collaboration from filmmakers Dan Lindsay (Why Us?) and TJ Martin (A Day of Hype in America).  A true story about courage and character, UNDEFEATED follows the Manassas Tigers – a severely underfunded and underprivileged high school football team – as they endeavor to reverse their fortunes with the help of a volunteer coach, Bill Courtney.  Heading to retail on February 19, 2013 for an SRP of $24.99 for the Blu-ray™ and $19.98 for the DVD, UNDEFEATED is a one-of-a-kind sports movie that will thrill and inspire – a moving affirmation of all that is best in us and all that is possible.

UNDEFEATED is “Irresistible,” said New York Times film critic, Manohla Dargis.  Wrote Marshall Fine in his STAR Magazine review, “This is a sports movie with heart!  You’ll be cheering until
the end.”  Added Entertainment Weekly’s Owen Gleiberman, “Suffice it to say that the agony of defeat in this movie is every bit as transporting as the thrill of victory.”

No hope.  No future… Until a football season united a team and revealed the character that turned them into heroes.  UNDEFEATED, an Academy Award®-winning documentary (2011 Best Documentary Feature – Dan Lindsay, TJ Martin and Rich Middlemas), is the inspiring and moving tale of three underprivileged student-athletes from inner-city Memphis and their volunteer coach, Bill Courtney, trying to help them beat the odds on and off the field.

The UNDEFEATED Blu-ray™ and DVD special features include an Audio Commentary with directors Dan Lindsay and TJ Martin; Deleted Scenes; a Black and White Teaser Trailer; and a “The Making of Undefeated” featurette.  Note: Special features are subject to change.

Learn more about UNDEFEATED at: www.undefeatedmovie.com

The Weinstein Company (TWC) is a multimedia production and distribution company launched in October 2005 by Bob and Harvey Weinstein, the brothers who founded Miramax Films in 1979.  TWC also encompasses Dimension Films, the genre label founded in 1993 by Bob Weinstein, which has released such popular franchises as SCREAM, SPY KIDS and SCARY MOVIE.  Together TWC and Dimension Films have released a broad range of mainstream, genre and specialty films that have been commercial and critical successes.  TWC releases took home eight 2012 Academy Awards(r), the most wins in the studio’s history.  The tally included Best Picture for Michel Hazanavicius’s THE ARTIST and Best Documentary Feature for TJ Martin and Dan Lindsay’s UNDEFEATED.  THE ARTIST brought TWC its second consecutive Best Picture statuette following the 2011 win for Tom Hooper’s THE KING’S SPEECH.

Since 2005, TWC and Dimension Films have released such films as GRINDHOUSE; I’M NOT THERE; THE GREAT DEBATERS; VICKY CRISTINA BARCELONA; THE READER; THE ROAD; HALLOWEEN; THE PAT TILLMAN STORY; PIRANHA 3D; INGLOURIOUS BASTERDS; A SINGLE MAN; BLUE VALENTINE; THE COMPANY MEN; MIRAL; SCRE4M; SUBMARINE; DIRTY GIRL; APOLLO 18; OUR IDIOT BROTHER; I DON’T KNOW HOW SHE DOES IT; SARAH’S KEY; SPY KIDS: ALL THE TIME IN THE WORLD IN 4D; MY WEEK WITH MARILYN; THE IRON LADY; W.E.; CORIOLANUS; UNDEFEATED; THE ARTIST; BULLY; and EASY MONEY.  Currently in release are THE MASTER; THE INTOUCHABLES; and LAWLESS. Upcoming releases include KILLING THEM SOFTLY; THIS MUST BE THE PLACE; SILVER LININGS PLAYBOOK; and DJANGO UNCHAINED.