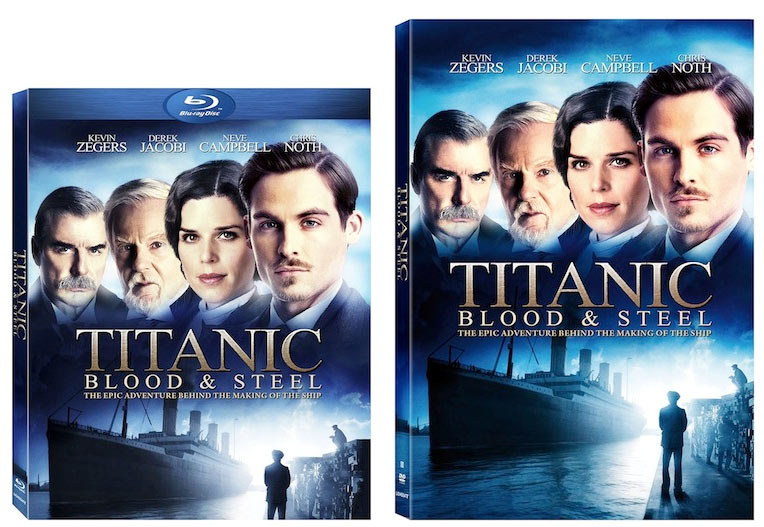 The 3-disc Blu-ray and 3-disc DVD sets both include two extensive featurettes: a “making of” plus a behind-the-scenes look into the visual effects of the mini-series. Titanic: Blood & Steel will be available for the first time on Blu-ray Disc and DVD for the suggested retail price of $29.97 and $29.98, respectively.

Belfast, 1909. The Harland and Wolff shipyard has been handed the greatest project in its history. It will build a great, unsinkable ship.  And it will be called the RMS Titanic.  Titanic: Blood & Steel is the untold story of the building of a legend, and the many lives it affected during its 3-year construction.  To its wealthy investors, it was a dream.  To the middle class who oversaw the project, it was a challenge.  But to the working class who built it, Titanic was the start of a revolution.  With Ireland under British rule, and the Protestant and Catholic struggle intensifying, Titanic was more than a ship…it was a symbol of ambition, hope and unity.

Lionsgate is a leading global entertainment company with a strong and diversified presence in motion picture production and distribution, television programming and syndication, home entertainment, family entertainment, digital distribution, new channel platforms and international distribution and sales.  The Company has built a strong television presence in production of primetime cable and broadcast network series, distribution and syndication of programming and an array of channel assets.  Lionsgate currently has 23 shows on 16 networks spanning its primetime production, distribution and syndication businesses, including the multiple Emmy Award-winning Mad Men, the critically acclaimed series Weeds, Nurse Jackie and Boss, the new comedy Anger Management, which has been picked up for an additional 90 episodes by FX, the upcoming network series Nashville and Next Caller, the syndication successes Tyler Perry’s House of Payne, its spinoff Meet the Browns, For Better Or Worse, The Wendy Williams Show, Are We There Yet? and the upcoming Orange Is The New Black, an original series for Netflix.

Its feature film business has been fueled by such recent successes as the blockbuster first installment of The Hunger Games franchise, which has already grossed nearly $700 million at the worldwide box office, The Expendables 2, The Possession, The Cabin in the Woods, Tyler Perry’s Madea’s Witness Protection, The Lincoln Lawyer and Margin Call.  With the January 2012 acquisition of Summit Entertainment, the Company has now added the blockbuster Twilight Saga, which has grossed more than $2.5 billion at the worldwide box office, to its current slate, giving the Company the two premier young adult franchises in the world.  Recent Summit hits include Red, Letters to Juliet, Knowing and the Academy Award-winning Best Picture, The Hurt Locker.

Lionsgate’s home entertainment business is an industry leader in box office-to-DVD and box office-to-VOD revenue conversion rate.  Lionsgate handles a prestigious and prolific library of approximately 15,000 motion picture and television titles that is an important source of recurring revenue and serves as the foundation for the growth of the Company’s core businesses.  The Lionsgate and Summit brands remain synonymous with original, daring, quality entertainment in markets around the world.