TO BE HONORED WITH

STAR ON THE HOLLYWOOD WALK OF FAME 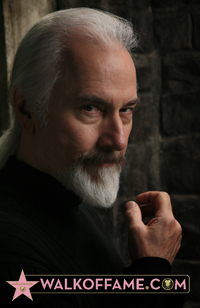 The Hollywood Chamber of Commerce will honor makeup artist Rick Baker with a star on the Hollywood Walk of Fame on November 30, 2012 at 11:30 a.m. at 6764 Hollywood Boulevard in front of The Guinness World Records Museum. “We are proud to honor those who have successfully helped make Hollywood what it is today with their talent and magical creations that fans have enjoyed since the beginning of the motion picture industry. Rick Baker is a revered artist who we are proud to say started his extraordinary career in California, home of the movies,” stated Ana Martinez, Producer of the Walk of Fame ceremonies.

During the ceremony, Mr. Baker will also be entered into The Guinness World Records™ Book twice – once for the most Oscar® wins, and also for the most Oscar nominations for Best Achievement in Makeup.  He has been nominated a total of twelve times with seven wins: An American Werewolf in London (1981), Harry and the Hendersons (1987), Ed Wood (1994), The Nutty Professor (1996), Men in Black (1997), How the Grinch Stole Christmas (2000) and The Wolfman (2010).

Rick Baker has been an influential force in the creation of creatures and prosthetic makeup for more than 40 years.

Born in Binghamton, New York, the son of Ralph (an artist) and Doris Baker (a bank teller), Baker moved with his family to Southern California at an early age and grew up in Covina.   When he was a child, Baker wanted to be a doctor, but he wanted to be Dr. Frankenstein so he could make monsters.  At 10 years old, he realized that doctors didn’t make movie monsters, make-up artists did. His passion was fueled by — in addition to TV monster movies and such shows as “Twilight Zone” and “Outer Limits” — the magazine “Famous Monsters of Filmland” and, particularly, articles by legendary makeup artist Dick Smith. That led to building monster model kits, making his own 8mm version of “Frankenstein,” and eventually erecting his first makeup lab in his bedroom.

Baker’s first professional job came when he was still a teenager at the (Art) Clokey Studios, where he was a puppet designer for the stop-motion animation series Davey and Goliath and Gumby.  When Rick was 18,  he wrote a letter to his idol Dick Smith, who invited him to his house and showed him his makeup lab.  Smith became Baker’s mentor and their continued association culminated in Baker assisting Smith on The Exorcist.

Baker honed his craft on early films including Live and Let Die and  TV’s The Autobiography of Miss Jane Pittman, for which Baker won an Emmy.  As his reputation grew within the Hollywood community, he pushed the boundaries of traditional makeup effects by transforming David Naughton into a four-legged, ferocious werewolf in An American Werewolf in London.  Rick’s ingenious use of prosthetics and puppet effects won him an Academy Award® for Outstanding Achievement in Makeup, the debut year of the category.

Garnering a reputation for excellence and resourcefulness, Rick’s assignments became a diverse and iconic collection of creatures including those in Star Wars; Harry and the Hendersons; Michael Jackson’s Thriller; Greystoke: The Legend of Tarzan, Lord of the Apes; Gorillas in the Mist; Coming to America; Gremlins 2: The New Batch; Men in Black; The Nutty Professor; Mighty Joe Young; and How The Grinch Stole Christmas, to name but a few.  Last year, Rick won his seventh Academy Award® for his contributions transforming Benicio Del Toro and Sir Anthony Hopkins into werewolves for The Wolfman.

He recently supplied a new population of aliens for Barry Sonnenfeld’s  MEN IN BLACK™ 3.   Thisout-of-this-world 3D adventure will be released November 30 by Sony Pictures Home Entertainment as a Blu-ray 3D™ Combo Pack,  Blu-ray™/DVD Combo Pack and DVD — all with UltraViolet™.  Earning more than $624 million at the worldwide box office, this action-packed sci-fi comedy will be released for the first time in 3D for the home.

Baker and his wife Silvia are active supporters of Autism Speaks, American Cancer Society, The Leukemia & Lymphoma Society and Friends and Helpers.

For more information and to view who shares a star on the Hollywood Walk of Fame, visit www.walkoffame.com