“This one will inspire the viewer to believe in miracles!”- The Dove Foundation

INSPIRATIONAL FILM TO OPEN IN NORWALK THEATERS ON OCTOBER 26, 2012 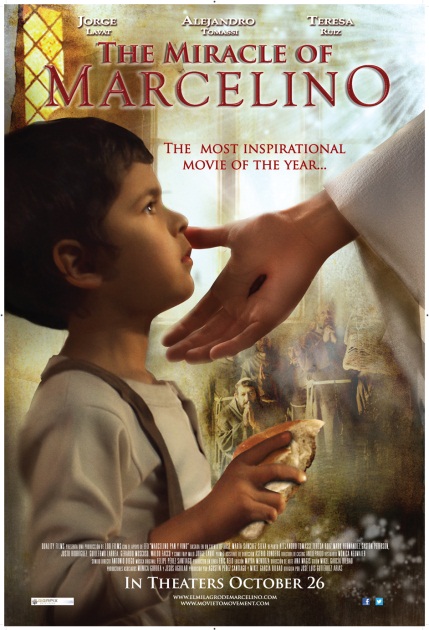 Los Angeles, Calif. (Oct. 23, 2012) Presented by Gigapix Releasing and Movie to Movement, The Miracle of Marcelino, will be introduced to American audiences for the first time, this weekend on October 26th. The Miracle of Marcelino gained acclaim from the world renown Dove Foundation for its family friendly content. The heart-warming drama will open in limited theaters beginning in Norwalk, Calif. at the AMC Norwalk 20. Last year, the captivating Spanish drama was presented at the 2011 Mirabile Dictu-International Catholic Film Festival where it took home the award for “Best Director” (Ladislao Vajda).

The Miracle of Marcelino stars Jorge Lavat, Alejandro Tomassi and Teresa Ruiz and tells the story of a young orphan boy (Marcelino) who is caught in the midst of Mexico’s revolution. His unwavering faith causes an unexpected miracle to occur.

The marketing campaign for Marcelino is drawing support from a variety of organizations and influencers. Jason Jones, CEO and founder of Movie to Movement, was immediately attracted to the film and is honored to once again have the opportunity to bring an inspiring film to America’s families.

“It seems providential that this 50’s Spanish Classic debuts five years to the day of the Bella’s release,” said Jones, also co-executive producer of Bella. “This powerful remake of Marcelino is sure to inspire a new generation to a deeper love of their faith, culture and family.”

Movie to Movement is also sponsoring three elementary schools, third grade and up in the Norwalk area, enabling the children to see the film with their classmates opening day.

LocalNorwalk influencers including Guadalupe Radio are also on board to support the film. The Latin station will be interviewing members of the cast, crew and marketing representatives throughout opening week and are hosting ticket giveaways for their listeners. Guadalupe Radio aims to change lives, create a sense of community and influence the culture through Christian values.

“Marcelino is a story that moves the hearts of kids and adults,” a representative from Guadalupe Radio said. “It’s a movie that you will want to watch with your whole family.”

Additionally, various churches are also partnering with the film, buying out theaters for their congregations and offering their members a fun family night out.

“Because Marcelino had so much faith, his biggest wish was granted,” said Brenda Guzman of St. Pius X Church. “I loved this movie and I definitely recommend for everyone to watch it.”

For more information on The Miracle of Marcelino and to watch the trailer, please visit  http://www.missionpicsintl.com/films/marcelino/.

Gigapix Releasing is an independent distribution company. The company features an experienced and award winning management team of veteran film and television executives. Gigapix Releasing takes a strategic approach toward distributing content with a focus on creating distinct entertainment brands across multiple platforms.

ABOUT MOVIE TO MOVEMENT:

Movie to Movement™ was created to promote a culture of life, love and beauty. They do this through the production of their own films, as well as sharing others. Movie to Movement believes that film is today’s most influential medium and that they can change culture, but first they must change Hollywood. By supporting Movie to Movement™ promoted and produced films, viewers are supporting good films and send a message to Hollywood that more need to be made. For more information on Movie to Movement please visit www.movietomovement.com

ABOUT THE MIRACLE OF MARCELINO:

The Miracle of Marcelino tells the story of a young orphan boy who is caught in the midst of Mexico’s revolution. The story begins as the friars of a poor war-ravaged monastery find an infant abandoned on their doorstep. Having nowhere to turn in the wake of the war, they decide to raise him in the monastery. The child grows into a rambunctious boy, fond of playing jokes on the friars with his best friend, Eleuterio. Beyond the trickery, inside Marcelino yearns for a mother as he observes the deep bond that Eleuterio shares with his mother.

Marcelino’s curiosity leads him to the attic of the monastery: the one place he was warned never to go. While there, he is drawn to a statue with a face so full of love that he is compelled to visit it often. Marcelino is too young to realize that it is a statue of Jesus. Thinking the statue child’s faith, an unexpected miracle occurs.