“The best Christmas movie in years … a gem” — Zorianna Kit, The Huffington Post

On Blu-ray 3D™, Blu-ray™ and DVD with UltraViolet™ on November 6th 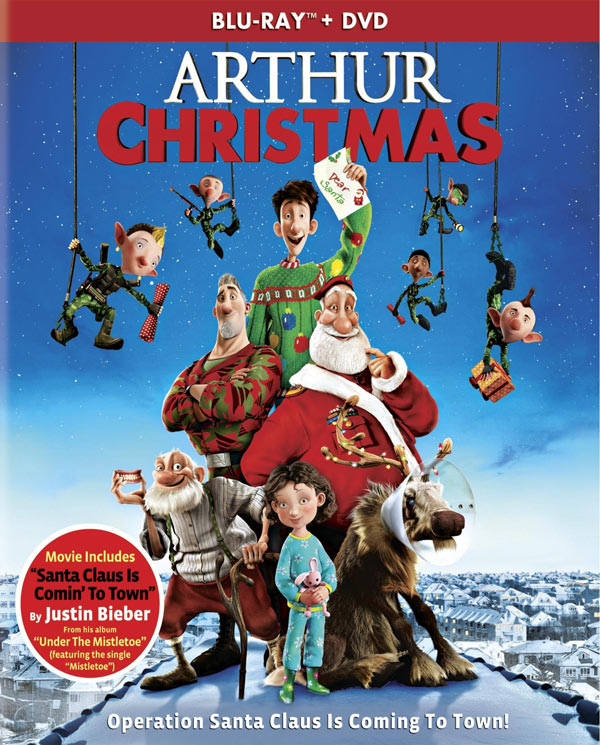 on Blu-ray 3D™, Blu-ray™ and DVD, all with UltraViolet™, on November 6th. From Aardman Animations (Chicken Run) and Sony Pictures Animation (The Smurfs) comes this heartwarming animated tale of Santa’s youngest son, Arthur, and his race to save one little girl’s Christmas. The movie reveals the answer to the age old question of children everywhere, just how all those millions of presents get delivered in one night, through an eye-popping look at Santa’s high-tech North Pole operation.  The 3D release, which was nominated for a Golden Globe® award, a BAFTA, and Critics’ Choice award for Best Animated Feature film, also took home the Golden Tomato award for Best Reviewed Animated Film of 2011 from the popular website, RottenTomatoes.com

The Blu-ray/DVD Combo Pack and DVD boast kid-friendly extras, including the “Elf Recruitment” video, and a behind-the-scenes featurette, “Unwrapping Arthur Christmas,” in which viewers can learn more about The Claus family, Santa’s elves and the heartwarming story. Also included are five progression reels that explore how filmmakers created the characters and key scenes in the film. In addition to the special features included on the Blu-ray and DVD, fans can experience the filmin 3D exclusively with the Blu-ray 3D Combo Pack.

The film tackles the question of how Santa delivers all his presents in one night. When Santa’s elves and their high-tech system of present delivery forgets to deliver one present to a young girl in England, Arthur embarks on a mission to safely deliver her pretty pink bicycle. Arthur decides it’s up to him not to disappoint this little girl and ensure that she will still believe in the magic of Christmas, even if it means conquering

some of his own fears. With Arthur’s determination and Grand-Santa’s quirky cynicism, the operation is bound to be an adventurous one.

Arthur Christmas has a running time of 97 minutes and is rated PG for some mild rude humor. Artwork and digital clips are available for download at www.sphepublicity.com. Visit Sony Pictures Home Entertainment on the Web at www.SonyPictures.com.

Sony Pictures Animation produces a variety of animated entertainment for audiences around the world.  The studio is following its worldwide comedy hits—the 2011 hybrid live action/animated family blockbuster, The Smurfs (3D) and the 2009 mouth-watering Cloudy with a Chance of Meatballs (3D)—with the family comedy Hotel Transylvania (3D) in September 2012 and the Smurfs 2 (3D) in July 2013.  Sony Pictures Animation, in conjunction with Aardman Animations, has produced two critically acclaimed feature films:  the CG-animated family comedy Arthur Christmas (3D); and the stop-frame animated high-seas adventure, The Pirates! Band of Misfits (3D).  In 2007, Surf’s Up received an Academy Award® nomination for Best Animated Feature Film.  The division, whose first feature film Open Season led to a very successful movie franchise, is turning 10 this year.  Sony Pictures Animation is an operating unit of Sony Pictures Digital.

Aardman, based in Bristol (UK), co-founded and run by Peter Lord and David Sproxton, is a world leader in animation. It produces feature films, television series and television commercials for both the domestic and international market. The studio has won over 400 international awards including 4 Oscars®.

Aardman’s highly creative stop-motion style and creative sensibilities have proven popular with critics and audiences around the world. In 2000, Chicken Run, their debut feature, took in nearly $225 million worldwide; since then, Wallace & Gromit: The Curse of the Were-Rabbit grossed nearly $200 million and Flushed Away, their first CG feature, earned $176 million. All three films have achieved enormous critical acclaim, with the three films earning a total of 27 Annie Award nominations (the animation community’s highest honor). In addition, Wallace & Gromit: The Curse of the Were-Rabbit was honored with the Academy Award® for Best Animated Feature. http://www.aardman.com. In addition to The Pirates! Band of Misfits, Aardman’s recent film credits include the CG-animated Arthur Christmas.