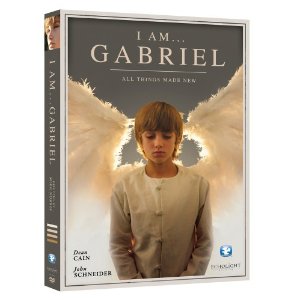 WHAT:  I AM . . . GABRIEL is a moving and mysterious film about divine interaction in our daily lives weaving multiple stories of individuals touched by tragedy and their varied responses to an unlikely messenger from God with an amazing message of hope.

WHO:  Starring Dean Cain (Lois & Clark: The New Adventures of Superman), John Schneider (The Dukes of Hazzard, Smallville) and Gavin Casalegno in his breakout role as the title character. I AM . . . GABRIEL is from actor, director, writer and producer Mike Norris, son of legendary performer and martial arts champion Chuck Norris.

WHY:  I AM . . . GABRIEL shows what happens when people turn to God in prayer and start to trust Him for the circumstances in their lives. It brings the mystery of faith to life and encourages viewers to see God at work in every detail.

SYNOPSIS:  Promise, Texas, is no place to raise a family. No rain. Businesses failing. The kids can’t wait to grow up and move away. Some folks say the town is cursed. But just when things are at their darkest, a mysterious boy comes out of the wilderness with nothing but the clothes on his back and a strange mat under his arm. He has a message for the people of Promise, but they’re slow to listen. They’re blind to the mirror between the slow death of the town and their own parched souls. Confronted by their spiritual shortcomings, the town’s indignation turns to outrage. Still the boy holds to his message: without Christ there is no hope, and Promise can be remade only through earnest communion with the Father. In the end, with his back against the wall — surrounded by skeptics — the boy is forced to reveal his true identity.

AVAILABILITY:  Preorders now, immediate sales and delivery start Aug. 28. The film is available through such leading online and retail providers as Amazon.com, LifeWay Christian Stores, Family Christian Stores, among many others.