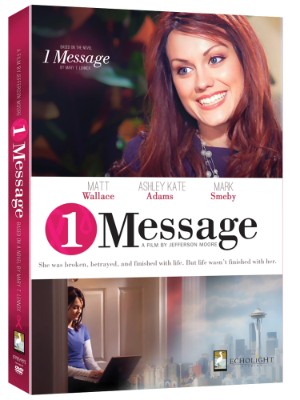 DALLAS – Aug. 28, 2012 – 1 MESSAGE—an entertaining, inspiring film about faith’s power to help us look beyond the externals—debuts Sept. 25 from veteran filmmaker Jefferson Moore. The storyline—about a woman finding unlikely help and hope after breast cancer surgery drives her to despair—hits home for the film’s creator and star; both had family members affected by breast cancer, as did others among the cast and crew, displayed in a moving tribute during the film’s credits.

“1 MESSAGE reminds us all that what’s on the outside doesn’t determine our value,” said Moore, who wrote and directed the film. “As the movie depicts, our bodies are just ‘packaging’ for what’s divine in us all. Created in God’s image, we’re all of infinite worth.”

In 1 MESSAGE, Becca (ASHLEY KATE ADAMS, TV: Royal Pains, Broadway: La Cage Aux Folles) falls into severe depression after breast cancer leads to a radical mastectomy. Betrayed and left by her fiancé, misunderstood by her mother, job lost, self-image destroyed, Becca is bolstered by a chance friendship that develops online. Slowly she discovers a faith that helps her find worth beyond what people see.

Kelly’s Filmworks produced 1 MESSAGE based on the novel by Mary T. Lennox, an oncology nurse with 22 years experience dealing with cancer patients. EchoLight Studios distributes the film, and it can be pre-ordered now with deliveries and immediate sales starting Sept. 25. 1 MESSAGE is available through such leading online and retail providers as Amazon.com, LifeWay Christian Stores and Family Christian Stores, among many others.

“Jefferson Moore continues to make quality films that touch our hearts, challenge our thinking and encourage our faith,” EchoLight Chief Global Strategist Christopher Morrow said. “We’re delighted to be working with someone of his talent and commitment.”