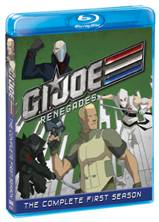 YO JOE! Fans of the popular animated series G.I. JOE: RENEGADESrejoice! On September 25, 2012, G.I. JOE: RENEGADES: THE COMPLETE FIRST SEASON Blu-ray Collection debuts on home entertainment shelves from Shout! Factory, in collaboration with Hasbro Studios. This highly anticipated 3-disc Blu-ray set collects all 26 adventure-filled episodes and an original behind-the-scenes look at G.I. JOE: RENEGADES bonus feature. Delivering exciting, action-packed storytelling and spectacular animation, this special Blu-ray collection is a must-have for fans and collectors of all ages and has a suggested retail price of $49.97.

Also available to own on the same day is the G.I. JOE:RENEGADES Season One, Volume Two DVD set, highlighting the second half of exhilarating episodes from the first season.

When a spy mission against Cobra Industries goes awry, a young G.I. JOE team is forced to hit the road as fugitives. Now the group — Duke, Scarlett, Roadblock, Tunnel Rat, Ripcord and Snake Eyes — must use their wits and elite training to prove their innocence to the world before being caught by the authorities, Cobra or another elite military team called the Falcons. But can the G.I. JOE team avoid capture long enough to clear their names and bring real justice to Cobra?

As excitement builds for this Blu-ray collection, Shout! Factory will announce in-depth bonus feature and additional news in forthcoming months.

Hasbro, Inc. (NASDAQ: HAS) is a branded play company providing children and families around the world with a wide-range of immersive entertainment offerings based on the Company’s world class brand portfolio. >From toys and games, to television programming, motion pictures, digital gaming and a comprehensive licensing program, Hasbro strives to delight its global customers with innovative, well-known and beloved brands such as TRANSFORMERS, LITTLEST PET SHOP, NERF, PLAYSKOOL, MY LITTLE PONY, G.I. JOE, MAGIC: THE GATHERING and MONOPOLY. The Company’s Hasbro Studios develops and produces television programming for markets around the world. Programming in the U.S. is distributed on The Hub TV Network, a multi-platform joint venture between Hasbro and Discovery Communications (NASDAQ: DISCA, DISCB, DISCK). Through the Company’s deep commitment to corporate social responsibility, including philanthropy, Hasbro is helping to build a safe and sustainable world for future generations and to positively impact the lives of millions of children and families every year. It has been recognized for its efforts by being named one of the “World’s Most Ethical Companies” and is ranked as one of Corporate Responsibility Magazine’s “100 Best Corporate Citizens.”  Learn more at www.hasbro.com.