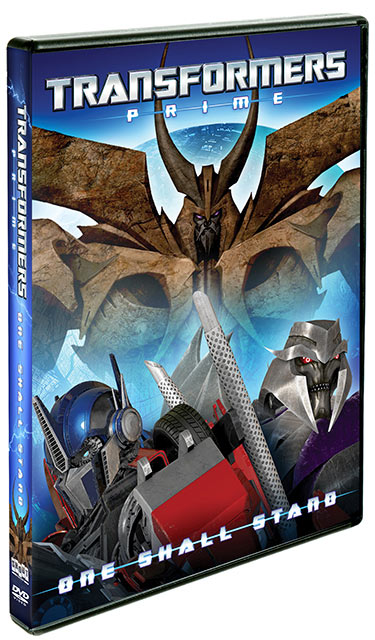 This summer, get ready for a special presentation of TRANSFORMERS PRIME for home entertainment. On July 31, 2012, Shout! Factory, in collaboration with Hasbro Studios, will debut TRANSFORMERS PRIME – ONE SHALL STAND DVD, featuring the compelling story behind the most iconic AUTOBOT ever, OPTIMUS PRIME, and an epic tale of deception, sacrifice, loyalty and triumph. Produced by Hasbro Studios, ONE SHALL STAND highlights the story that spanned the first two seasons of the acclaimed CGI animated series TRANSFORMERS PRIME, which currently airs on The Hub television network in the U.S and Teletoons in Canada. This action-packed story arc is edited together in a seamless, riveting special presentation for this home entertainment release. Packed with exciting bonus content, TRANSFORMERS PRIME – ONE SHALL STAND DVD delivers spectacular CGI animation and captivating family entertainment for all ages. This highly collectible DVD is priced to own with a suggested retail price of $14.97.

Fans can pre-order now on Amazon.com

TRANSFORMERS PRIME – ONE SHALL STAND

With UNICRON’s awakening, extreme measures needed to be taken. An unlikely alliance formed between AUTOBOTS and DECEPTICONS to defeat UNICRON, a foe who could spell the end of the Earth. The action unfolds as the AUTOBOTS battle alongside MEGATRON against the evil UNICRON. Enemies became allies, allies became confidantes, and with the Matrix of Leadership, the planet Earth was saved.

Though at immeasurable personal cost, when OPTIMUS surrendered the Matrix, he lost more than the collective wisdom of the PRIME. He lost himself. With the power of the Matrix no longer within him, it would stand to reason that OPTIMUS has reverted to his pre-PRIME state as the historical archivist ORION PAX.  MEGATRON manipulates the impaired OPTIMUS into joining the DECEPTICONS.  But does the OPTIMUS and AUTOBOTS’ true key to salvation lie in the trusted hands of a teenaged boy named Jack?

As excitement builds for this DVD, Shout! Factory and Hasbro Studios will announce in-depth bonus features and additional news in forthcoming months.

TRANSFORMERS PRIME – ONE SHALL STAND DVD