What can you say with only a thousand words? 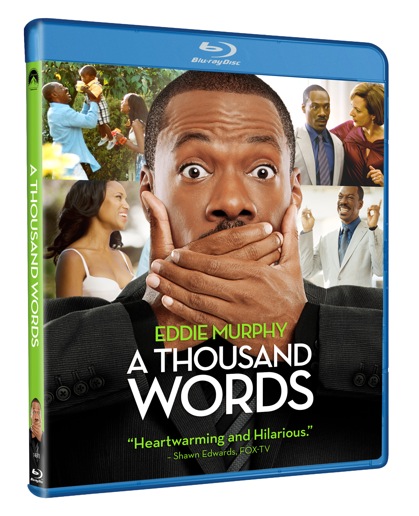 HOLLYWOOD, Calif. – (May 8, 2012) When every single word counts, what do you choose to say?  That is the question answered to comedic effect in A THOUSAND WORDS, debuting on Blu-ray and DVD on June 26, 2012 from Paramount Home Media Distribution.  The film will also be available On Demand and for Digital Download on June 22, 2012.  Academy Award® nominee[1] Eddie Murphy (Tower Heist) is Jack McCall, a fast-talking literary agent, who can close any deal, any time, anywhere. He has set his sights on popular New Age guru Dr. Sinja
(Cliff Curtis) for his own selfish purposes.  But Dr. Sinja is on to him, and Jack’s life comes unglued after a magical Bodhi tree mysteriously appears in his backyard one night. With every word that comes out of Jack’s mouth, another leaf instantly falls from the tree and he realizes that when the last leaf falls, both he and the tree will meet their end.  Undeterred, he comes up with some outrageously funny ways to communicate, but ultimately he must face reality.  Words have never failed the effusive Jack McCall before, but now he’s only got a thousand words left to discover what matters most in life.  “Laugh a lot” (Julie Harkness, “Made In Hollywood”) and learn some entertaining life lessons in this “heartwarming and hilarious” (Shawn Edwards,
Fox-TV) comedy.

A THOUSAND WORDS will be available on Blu-ray with 11 deleted and extended scenes, including an alternate ending.  The DVD will include six deleted scenes.  All Blu-ray and DVD releases available for purchase will be enabled with UltraViolet, a new way to collect, access and enjoy movies.  With UltraViolet, consumers can add movies to their digital collection in the cloud, and then stream or download them – reliably and securely – to a variety of devices.

Fast-talking Jack McCall (Eddie Murphy) says whatever it takes to close a deal. But after stretching the truth with a spiritual guru, he suddenly finds his life depending on a magical tree with 1,000 leaves…one for every word he has left. Now Jack’s got to stop talking and conjure up some outrageous ways to communicate or he’s a goner. See why A Thousand Words is the hilarious, feel-good comedy that has it all: “great cast, great laughs [and a] great time!” (Julie Harkness, “Made In Hollywood”).  Eddie Murphy stars along with Kerry Washington, Allison Janney, Clark Duke, Cliff Curtis, Jack McBrayer and John Witherspoon.