“The perfect movie for anyone who has ever been in love.” – Shawn Edwards, Fox TV

Can a Once in a Lifetime Love Find a Second Chance?

On DVD and Blu-ray™ Combo Pack May 8th
Includes UltraViolet™ 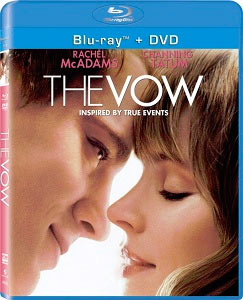 CULVER CITY, CALIF. (April 2, 2012) – Rachel McAdams (Midnight in Paris, The Notebook) and Channing Tatum (21 Jump Street, Dear John) rediscover the meaning of true love in THE VOW, coming to DVD and Blu-rayTM Combo Pack May 8th from Sony Pictures Home Entertainment. Both DVD and Blu-rayTM Combo Pack include UltraViolet™, which allows owners of the Blu-ray and DVD to add the film to their Digital Rights Library, enabling them to instantly stream or download the film. Inspired by true events, the romantic tale follows Paige (McAdams) and Leo (Tatum) after they survive a car accident that leaves Paige without any memory of the man she fell in love with or their marriage. It’s up to Leo to win back her heart … and her mind. The film also stars Sam Neill (TV’s “Alcatraz,” Jurassic Park), two-time Academy Award® winner Jessica Lange (Best Supporting Actress, Tootsie, 1982; Best Actress, Blue Sky, 1994) and Scott Speedman (Underworld).

The DVD and Blu-rayTM Combo Pack bonus features include commentary with Director Michael Sucsy, a gag reel and deleted scenes.  Exclusive to the Blu-rayTM Combo Pack are three behind-the-scenes featurettes: “’Til Death Do They Part,” a look at how the true-life story was made into the movie; “Profiles of Love: Paige and Leo,” which discusses what drew McAdams and Tatum to the project, as well as their perspectives on their characters and the film’s themes; and “Trying to Remember,” explaining how trauma can affect memory.

Synopsis:  Inspired by a true story, THE VOW tells the tale of a husband (Channing Tatum) who must regain the love of his wife (Rachel McAdams) after a coma steals the past five years of her memories.

THE VOW, a Birnbaum/Barber production, presented by Screen Gems and Spyglass Entertainment, was directed by Michael Sucsy from a story by Stuart Sender, and a screenplay by Abby Kohn, Marc Silverstein and Jason Katims. It was produced by Roger Birnbaum, Gary Barber, Jonathan Glickman and Paul Taublieb, with J. Miles Dale, Austin Hearst and Susan Cooper serving as executive producers.

The Vow has a running time of 104 minutes and is rated PG-13 for an accident scene, sexual content, partial nudity and some language.