Redemption…On and off the screen in inspirational sports drama TOUCHBACK 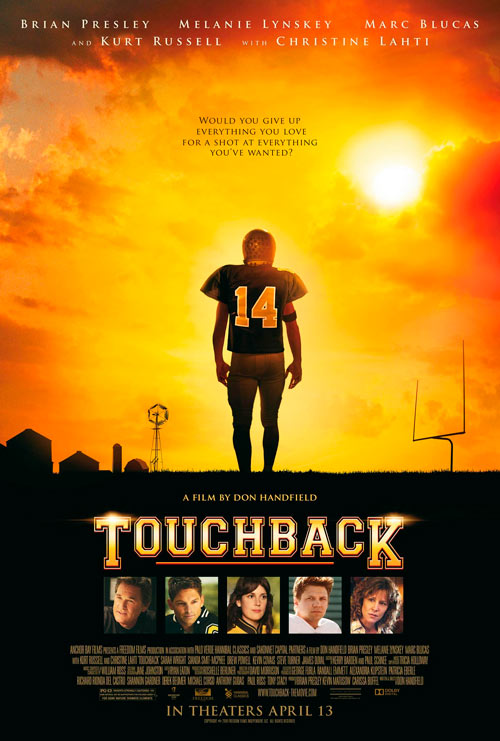 LOS ANGELES, CA. Audiences are calling the upcoming sports drama Touchback, “powerful,” “inspirational,” “heartfelt,”  “emotional,” and “engaging.” However, no one has been more impacted by the movie than its lead actor, Brian Presley (Home of the Brave), who says the movie has changed his life.

Raised a devout Christian, and honored in high school by the Fellowship of Christian Athletes as Oklahoma’s “Athlete of the Year,” Presley came to Hollywood with hopes of producing and acting in family-friendly films. However, after a few years in Tinseltown, temptations of money and fame began to challenge his faith. When the distribution deal he had negotiated for a major movie (in which he starred and produced) fell through, he found himself embroiled in lawsuits against big players and trying to save his investors’ money. Eventually Presley lost his home and sunk into a seemingly hopeless situation. He spiraled into a depression and felt no one–not even his loving wife–could help him.

In that darkest hour, a friend sent Presley the script for Touchback. As he read it, he was amazed to hear the parallels between the lead character’s journey and his own life. Presley immediately identified with Murphy. “God’s going to give us trials in life,” he said. “And it’s just like in sports: It’s not about how you get knocked down – the sign of a true champion is how you get back up and face it.” For Presley, playing Murphy helped him face his own trials and get back on track: “This is a story of redemption. No matter where you are in life, God can lead you to victory.”

Opening in select theaters April 13th, with additional markets being added in the following weeks, Touchback is about a former high school football star turned farmer and family man, Scott Murphy (Brian Presley) who finds himself with a unique opportunity to revisit his glory days during the State championship game where he permanently injured his knee in a game-winning play. Given a second shot at his destiny, Scott seeks counsel from Coach Hand (Kurt Russell), Scott’s longtime mentor on and off the field, to help him decide whether to let his fate unfold, or follow a path that will change his future. Written and Directed by Don Handfield, Touchback also stars Melanie Lynskey (Up In the Air, Sweet Home Alabama, CBS’ “Two and a Half Men”), Mark Blucas (Knight and Day, The Jane Austen Book Club) and Christine Lahti (Smart People, CBS’ “Chicago Hope”).

Touchback is a heart-warming, family film with a powerful message about accepting the challenges in our lives, and recognizing them as blessings.

Keeping with the major themes of the film, Freedom Films will be donating a portion of its proceeds from the release of Touchback to organizations which are important to Brian and his partners. These include Farm Aid (www.farmaid.org), Fellowship of Christian Athletes (www.fca.org), City on a Hill Productions (www.cityonahillproductions.com), and Joel Osteen Ministries (www.joelosteen.com).

What People Are Saying About Touchback (from Pre-Release Screenings)

“Touchback is a powerful and inspirational Hollywood movie made by a member and dear friend of FCA, actor/producer Brian Presley. Touchback has many themes and morals that relate to the work we do in FCA, and I encourage everyone to support this movie when it opens in theaters April 13, 2012.” – Chris Kaiser, Director Northeast Oklahoma Fellowship of Christian Athletes

“A touching, inspirational movie. It’s about life and the choices you make….it reminds me of the classic It’s a Wonderful Life…truly engaging. Makes you appreciate what really matters in life.” – Jay Swick, Absolute Sublime

“Touchback was very moving and well done – 2 hours of high quality entertainment packed with great moral lessons without getting preachy. Many Christian films today appeal to the faith community but alienate mainstream audiences. Touchback is a mainstream film that appeals to a mainstream audience while at the same time speaking to faith-based audiences who can read the Biblical values between the lines.” – Curtis Wallace, COO TDJ Enterprises (T.D. Jakes)

“Touchback is a great film! The story is heartfelt and engaging, and one that people of all ages can relate to and enjoy.” – Winnie Werre, member Del Rey Players, Loyola Marymount University

“I would highly recommend this film! It was very inspirational and motivational for athletes of all ages!” – Stacey Rossodivito, Youth Leader, St. Kateri Church, Valencia, CA

“Touchback is inspiring. It shows how a community can demonstrate love, family, and friendship.” – Rachel Trushinski, member UCLA Communications Association