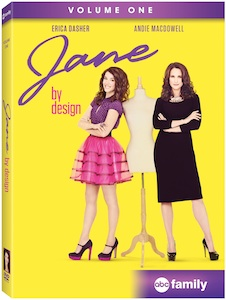 When mistaken for an adult, sixteen year-old Jane (Erica Dasher) finds herself working for a high-powered executive (Andie McDowell) at a hip fashion house.  From classes to couture, relive all the drama, romance and non-stop excitement as Jane juggles her life as a regular teenager and her job in the cutthroat world of fashion…all while trying to keep her true identity a secret.  Bring home ABC Family’s Jane By Design: Volume 1, available on DVD March 20th, just two weeks after the season finale!