DVD to be released in March 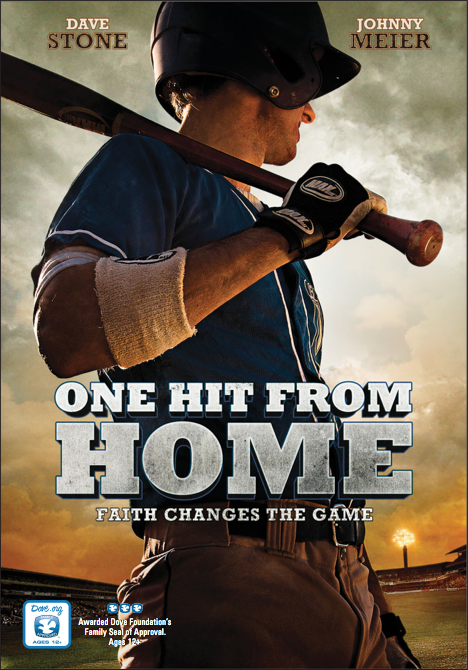 02/28/2012 -Intrigue Films will release their first movie entitled “One Hit from Home” on March 6, 2012.  The movie will be screened in churches and theaters in 23 markets before releasing on DVD to CBA (Christian Booksellers Association) stores as well as Blockbuster Video stores via Pureflix.

“One Hit from Home” stars the founders of Intrigue Films, Dave Stone and Johnny Meier. Produced by Pavel Tchurstein, the story revolves around pro-baseball superstar Jimmy Easton (Dave Stone) who suffers a career-ending knee injury and returns to a place he has not been in a very long time….home.   Jimmy confronts dark memories from a tragic past as he tries to make peace with a life he once left behind. Things take an unexpected turn when he is forced back into the world of baseball as the coach of an underachieving college team. Coach Jimmy’s rocky relationship with Brandon Elliot (Johnny Meier), the team’s only star, challenges both of them to deal with their similarly troubled pasts.  The movie hits on several themes including fatherhood, identity and forgiveness.  The movie has been given the Dove Family seal of approval for ages 12 and older.

Stone and Meier formed Intrigue Films in 2007 after they met in acting school. The duo decided to produce and star in a horror movie together called “They Know.”  But after befriending a new pastor in their community, the men eventually became Christians and their worldviews began to change.  One Easter Sunday, Meier was invited by an elderly couple to join them for coffee at Starbucks and as the woman opened her bible and began to read scripture, Meier describes a life-changing moment. “It was like I stopped hearing anything she was saying and all I heard was ‘DON’T RELEASE YOUR HORROR FILM.’  It took me aback because we had poured two years and hundreds of thousands of dollars into the project.”

Stone adds, “You know the crazy part is, although at this point we had given our hearts to Christ and we knew that the content of the movie was a bad representation of our new-found faith, to be honest, the thought had never once crossed our minds to shelf that film. On the contrary, we really needed the money and we both knew this would be a huge step back from a business perspective if we pulled it from distribution.  But ultimately, we decided to do just that.  The only copy of that film is in the back of my closet.”

The duo spent the next two years searching for projects before they came up with an idea for a redemption story about a former major league baseball star whose life was in shambles. Less than three days later, they had an unrelated breakfast scheduled with Tchurstein that led to an investment deal for the film. From there, the three of them developed the story and laid the groundwork for what would become “One Hit From Home.” Meier sees their decision to do a project that was centered on a Christian theme as a turning point.

“We looked at a lot of ideas over a two-year time span,” says Meier.  “But as soon as we began fleshing out a film with a redemptive, biblical message, the financing came almost instantly.  I feel like it was God’s way of saying, ‘Now you are starting to figure out what I want you to do!’”

With the release of their first film and subsequent projects, Stone, Meier and Tchurstein want Intrigue Films to be known as a film production company that is committed to changing culture through film.  “It is our ultimate desire to produce Hollywood-grade films that are entertaining, inspiring, and founded in a Christian worldview, offering biblically-based messages and themes,” says Meier.