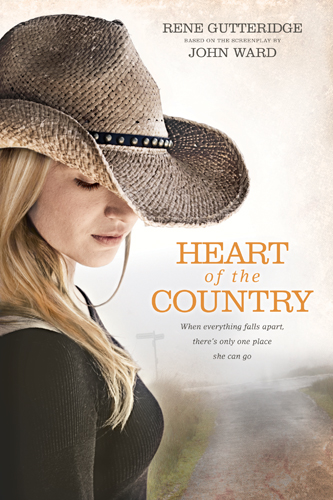 CHICAGO, IL (February 2012)—Tyndale House Publishers has partnered with Bayridge Films and will launch a contest, February 22, 2012, with a special e-book promotion. Customers who purchase the e-book Heart of the Country by Rene Gutteridge and John Ward (paperback releasing from Tyndale House Publishers fall 2012), based on a screenplay of the same name, will receive a special code in the e-book that will allow them to enter the “Be a Star for a Day!” contest. The grand prize winner and a guest will be flown to the set of the film, stay in the cast hotel, and get the full movie-set experience with all the other cast members. They will have a star trailer, go through wardrobe, makeup, and hair, and have a speaking part in a scene of the movie Heart of the Country! The contest ends March 15, 2012.

‘One Tree Hill’ actress and country music artist Jana Kramer will play the lead role, Faith Carraway,  in Heart of the Country, the Bayridge Films production that will be filming in Southeastern North Carolina in March, director John Ward confirmed Tuesday. “Major Dad” Gerald McRaney will play her father.

In Heart of the Country, Faith and Luke Carraway have it all. Faith is a beautiful singer turned socialite while Luke is an up-and-coming successful businessman. After taking his inheritance from his father’s stable business to invest in a successful hedge fund, he believes he is on the fast track as a rising young executive. When Luke is arrested for his alleged involvement in a Ponzi scheme, Faith is crushed and runs home to the farm and family she turned her back on years ago. Luke is forced to turn to his own family for help. Can two prodigals return to families they abandoned? Can a marriage survive betrayal?

The e-book is available for a special introductory price of $2.99 for a limited time. Visit heartofthecountrymovie.com for more details.

Rene Gutteridge is the author of seventeen novels including Listen, the Storm series, the Boo series, and the novelization of the movie The Ultimate Gift. Rene and her husband have two children and live in Oklahoma.

John Ward has spent twenty-five years in the film industry as a screenwriter, director, and actor.  He recently wrote, directed, and starred in the feature film I AM.  He also wrote, produced, and directed the Liquid DVD series for Thomas Nelson. He currently serves as president of Bayridge Films.

More information about Heart of the Country is available here:

Tyndale House Publishers was founded in 1962 by Dr. Kenneth N. Taylor as a means of publishing The Living Bible. It is now one of the premier publishing houses in the industry. Tyndale products include numerous New York Times bestsellers, including the popular Left Behind series. Tyndale also publishes the Holy Bible, New Living Translation, and many other resources for church and family. Tyndale House Publishers is located in Carol Stream, Illinois, a western suburb of Chicago.