the Much-Anticipated Film Adaptation of 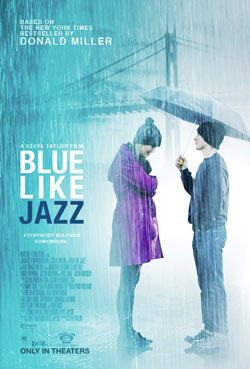 Among the first high-profile fan-financed films;

Los Angeles, CA (February 21, 2012) – Roadside Attractions has acquired all U.S. rights to the film BLUE LIKE JAZZ. Directed and co-written by Steve Taylor (THE SECOND CHANCE) the film will have its World Premiere in the Narrative Spotlight section at the 2012 South-by-Southwest Film Festival before opening in theatres on April 13th. Lionsgate will handle all ancillaries including DVD, VOD and TV through their output deal.

Blue Like Jazz by Donald Miller spent 43 weeks on the New York Times Best Seller list and has sold over 1.5 million copies to date.  The semi-autobiographical story was adapted for the screen by Miller, Steve Taylor and Ben Pearson.

In the early days of pre-production, the project was forced to be put on hold due to lack of funding, prompting a website to be created by fans, for fans, called “Save Blue Like Jazz”.  The site urged loyalists to help raise money to fund the movie through Kickstarter, an online matchmaker for filmmakers and financial backers. The campaign went on to raise a record-setting $345,000, more than doubling the original goal of $125,000, allowing the film to start production.

In Blue Like Jazz, Don (Allman), a pious nineteen-year-old sophomore at a Texas junior college, impulsively decides to escape his religious upbringing for life in the Pacific Northwest at one of the most progressive campuses in America, Reed College in Portland.  Upon arrival, Reed’s surroundings and eccentric student body proves to be far different than he could possibly imagine from the environment from which he came, forcing him to embark on a journey of self-discovery to understand who he is and what he truly believes.

Additional outreach and grassroots partnerships will continue to dominate the entertainment, college and faith oriented landscape in the coming weeks with a number of promotional activities:

SOUTH-BY-SOUTHWEST – Blue Like Jazz will have its World Premiere at the 2012 SXSW Film Festival on Tuesday, March 13th at the historic Paramount Theatre.  Film star and Austin native Marshall Allman is expected to attend along with Steve Taylor and Don Miller.

PROMOTIONAL BUS TOUR – Steve Taylor and Don Miller will kick off a 30-city bus tour on February 29th during which they will host screenings, events and discussions geared towards fans of the book and early supporters of the film.  Please visit: http://www.bluelikejazzthemovie.com/ for more information.

KICKSTARTER – 4500 Kickstarter backers on record, along with other fans and Blue Like Jazz followers are being organized into ‘street teams’ for the purpose of creating awareness for the film.  Over 5,000 supporters are already confirmed to participate with offline and online promotion impressions that are set to reach an estimated 2.5 million potential moviegoers.

CATALYST – Christian leadership organization CATALYST has been a supporter of the project at events in 2011 and will continue through its Spring opening. The film was featured for a select group of influencers at Catalyst East in October and will be featured at Catalyst West this April.

WORLD VISION – The international aid organization will support the film through the launch of its new “act:s” network of creative activism. The film will be a featured campaign on the February launch of this new initiative where followers will be challenged to host screening parties in opening weekend markets.

“Releasing a meaningful and smart film like BLUE LIKE JAZZ, which has a grass roots following from both the bestselling book and its successful Kickstarter origins, is a coup for Roadside Attractions,” said Co-President Eric d’Arbeloff. “We look for our films to speak to many different audiences, and BLJ’s story of college freshman’s journey speaks to both a faith audience and a young audience in general.”

“Roadside Attractions has been our first choice for a distributor ever since I told Howard and Eric about the project five years ago,” says director Steve Taylor. “They’ve got a great track record bringing eclectic movies to the widest possible audience, and we’re thrilled to be partnering with them.”

The deal was negotiated by Howard Cohen on behalf of Roadside with Taylor and V.T. Murray for Tennessee-based The Panda Fund on behalf of the filmmakers.