Nominated for 11 Academy Awards® Including 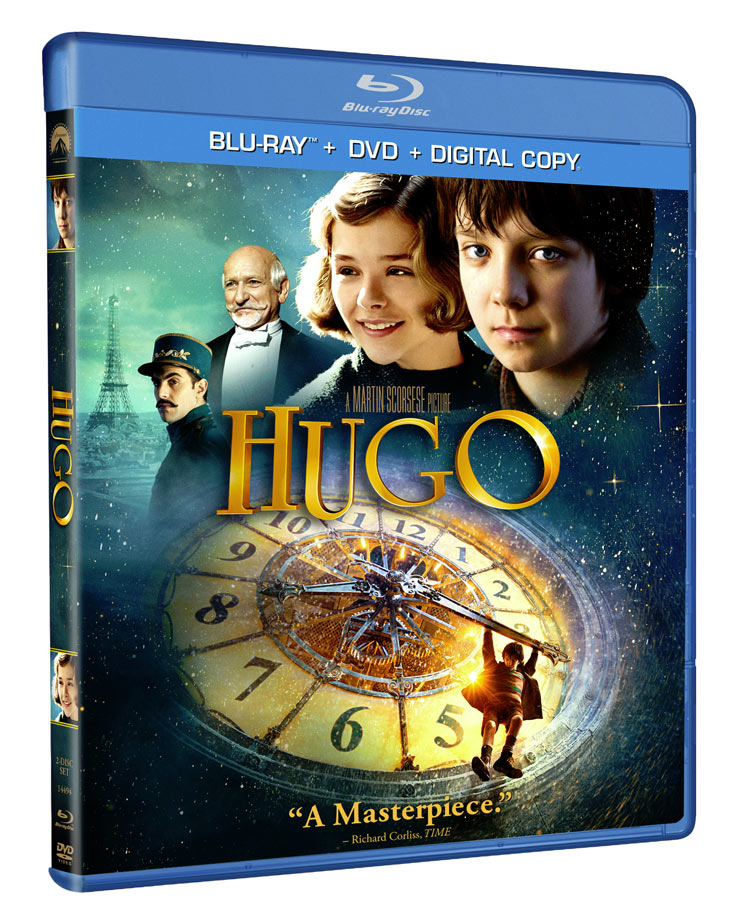 HOLLYWOOD, Calif. – Renowned director Martin Scorsese’s groundbreaking and original adventure HUGO makes its highly-anticipated debut on Blu-ray 3D, Blu-ray and DVD, all with UltraViolet™, On Demand and for Digital Download on February 28, 2012 from Paramount Home Media Distribution.  Recipient of more Academy Award nominations than any other film, HUGO was honored with 11 total—including Best Picture and Best Director—and has already won Martin Scorsese the Golden Globe for Best Director, was named the best film of 2011 by the National Board of Review, and was cited by more than 150 critics as one of the top 10 films of the year including writers for Associated Press, New York Times,
Rolling Stone, Time, Entertainment Weekly, New Yorker, New York Daily News and
The Hollywood Reporter, among others.  Called “magical and enchanting” (Roger Ebert, Chicago Sun Times) and “one of the wonders of the world you need to see” (David Edelstein, New York Magazine), HUGO is bursting with dynamic action, sumptuous imagery and a heartwarming and magical story that audiences of all ages can enjoy.

HUGO will be available in a three-disc Blu-ray 3D/Blu-ray/DVD combo pack, as well as a two-disc Blu-ray/DVD combo pack, each of which boast nearly an hour of behind-the-scenes special features including an illuminating making-of featurette, a retrospective on the extraordinary genius of filmmaker Georges Méliès, a look at the mechanical man at the heart of HUGO, plus interviews with the cast and crew and more.  The film will also be available as a single-disc DVD.  All Blu-ray and DVD releases available for purchase will be enabled with UltraViolet, a new way to collect, access and enjoy movies.  With UltraViolet, consumers can add movies to their digital collection in the cloud, and then stream or download them – reliably and securely – to a variety of devices.

The single-disc DVD is presented in widescreen enhanced for 16:9 TVs with Dolby Digital English 5.1 Surround, French 5.1 Surround, Spanish 5.1 Surround and English Audio Description and English, French and Spanish subtitles.  The disc includes the feature film in standard definition and Shoot The Moon (The Making of Hugo).

Welcome to a magical world of spectacular adventure! When wily and resourceful Hugo discovers a secret left by his father, he unlocks a mystery and embarks on a quest that will transform those around him and lead to a safe and loving place he can call home. Academy Award-winning** filmmaker Martin Scorsese invites you to experience a thrilling journey that critics are calling “the stuff dreams are made of.” (Peter Travers, Rolling Stone).

Paramount Pictures and GK Films present a GK Films/Infinitum Nihil Production of
A Martin Scorsese Picture: “Hugo,” directed by Martin Scorsese, with a screenplay by
John Logan, based upon the book entitled The Invention of Hugo Cabret by Brian Selznick.   It is produced by Graham King, Tim Headington, Scorsese and Johnny Depp.   The executive producers are Emma Tillinger Koskoff, David Crockett, Georgia Kacandes and
Christi Dembrowski. The music supervisor is Randall Poster; casting is by Ellen Lewis.