The Must-Own Movie For The Entire Family Debuts

on Blu-ray ™ Combo Pack, Digital and 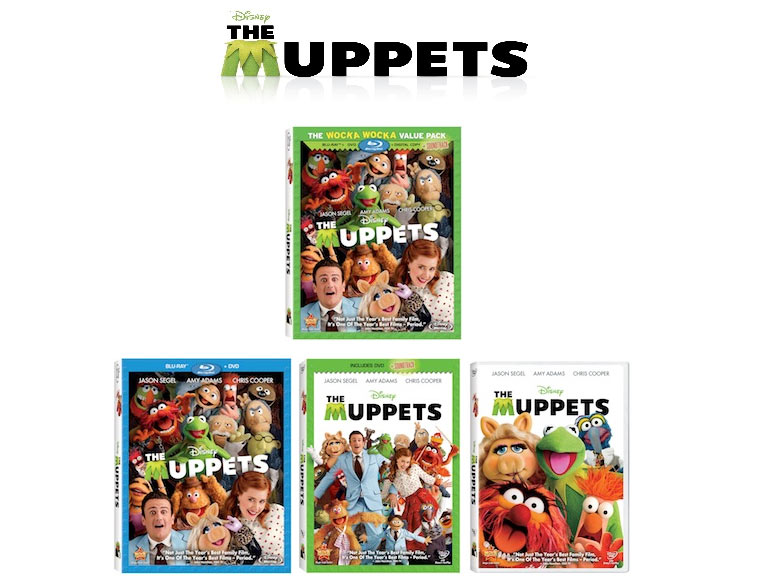 as part of  a ‘Wocka-Wocka’ Pack for the Ultimate Muppets Experience!

BURBANK, Calif., January 19, 2012 –– One of the year’s best-loved family comedies and among the best reviewed films of 2011, Disney’s “The Muppets,” starring Jason Segel, Academy Award®-nominee Amy Adams, and favorite celebrity couple Kermit the Frog and Miss Piggy — debuts March 20 on Blu-ray™ Combo Pack, DVD, Digital Download and On-Demand formats.  A must-own movie the entire family can enjoy, Disney’s “The Muppets” in-home release includes the DVD and music soundtrack packaged together and also offered as the ultimate Muppets experience, a ‘Wocka-Wocka Value Pack,’ which contains the movie on Blu-ray high definition, DVD and Digital Copy (three discs), plus a download card which allows fans to own all the songs from the film’s hugely popular soundtrack.

Disney’s “The Muppets” Blu-ray Combo Pack, with its flawless picture and pitch perfect sound, comes with a fantastic slate of bonus content including the laugh out loud “The Longest Blooper Reel Ever Made (In Muppet History––We Think).”  The exciting release also includes the hilarious featurette “A Little Screen Test on the Way to the Read Through,” which follows Jason Segel, Kermit, The Great Gonzo, Fozzie Bear, Miss Piggy and others asthey get ready for the first day of production, and much more fun.

“Blu-ray is a great way to bring the Muppets into your home without having to worry about cleaning up after us,” said Kermit the Frog, commenting on the announcement. “And the behind-the-scenes extras are a revealing tell-all look at what it took to bring our movie to the big screen. It’s a must-see for fans of bloopers, flubs and slip-ups – which pretty much describes our act.”
Miss Piggy is equally thrilled at the movie’s Blu-ray release, “Now you can watch moi whenever you want! Ooh! Lucky vous!”

Additional fun-filled features on Disney’s “The Muppets” Blu-ray include a groundbreaking industry first — ‘Disney Intermission,’ a hilarious all-new feature that allows viewers to press Pause on their remote control and watch as the Muppets take over the screen and entertain until the movie resumes playing.   The release also includes “Explaining Evil: The Full Tex Richman Song,”  an extended version of the rollicking rap song by villain Tex Richman (Academy Award® winner Chris Cooper)  who provides the hilarious backstory of why he hates the Muppets.  Audio commentaries with screenwriter and star Jason Segel, director James Bobin and screenwriter Nicholas Stoller are also included.

With the Muppet’s signature irreverent comedy, songs and dancing, Muppet fans of all ages will cheer as the gang reunites to put on a benefit show to save the crumbling Muppet Studios from being razed by nefarious oil baron Tex Richman. New fans and long-time devotees will find the rainbow connection when they bring Disney’s “The Muppets” into their very own homes.

The Longest Blooper Reel Ever Made (In Muppet History––We Think) – A laugh out loud look at the actors’funny gaffs and gags from behind the scenes of making Disney’s “The Muppets.”

Disney Intermission – Groundbreaking Blu-ray feature. Pausing a movie will never be this much fun, as the Muppets take over the screen every time you stop the disc!

Scratching The Surface: A Hasty Examination of the Making of Disney’s “The Muppets.” Hosted by unit production manager monster J.G., the cast and crew take a behind the scenes look at making Muppet and movie history.

Explaining Evil: The Full Tex Richman Song. Rapping his way through the story of his miserable life, Tex tells audiences why he turned out to be such a rotten guy.

A Little Screen Test on the way to the Read Through. This hilarious footage follows the Muppet gang as they go to their first table reading of the script.

The Longest Blooper Reel Ever Made (In Muppet History––We think).

Scratching the Surface: A Hasty Examination of the Making of Disney’s “The Muppets”

A Little Screen Test on the Way to the Read Through

The longest Blooper Reel Ever Made (In Muppet History––We Think)

The Longest Blooper Reel Ever Made (In Muppet History––We Think)

Social Media
Stay connected with the latest news and information on Disney’s “The Muppets.”

On vacation in Los Angeles, Walter, the world’s biggest Muppet fan, his brother Gary (Jason Segel) and Gary’s girlfriend, Mary (Amy Adams), from Smalltown, USA, discover the nefarious plan of oilman Tex Richman (Chris Cooper) to raze Muppet Studios and drill for the oil recently discovered beneath the Muppets’ former stomping grounds. To stage a telethon and raise the $10 million needed to save the studio, Walter, Mary and Gary help Kermit reunite the Muppets, who have allgone their separate ways: Fozzie now performs with a Reno casino tribute band called the Moopets, Miss Piggy is a plus-size fashion editor at Vogue Paris, Animal is in a Santa Barbara clinic for anger management, and Gonzo is a high-powered plumbing magnate.

Disney’s “The Muppets” is directed by James Bobin (“Flight of the Conchords,” “The Ali G Show”) and produced by the Academy Award®-nominated team of David Hoberman and Todd Lieberman (“The Fighter,” “The Proposal”) with a screenplay written by Segel & Nicholas Stoller (“Get Him to the Greek”), who also serve as executive producers along with John G. Scotti and “The Muppet Show” veteran Martin G. Baker. Bret McKenzie, who created, co-wrote, executive-produced and starred in the hit HBO television series “Flight of the Conchords,” is the music supervisor as well as the writer/producer of three original songs. Original score is by Christophe Beck, Michael Rooney is the choreographer, Rahel Afiley is the costume designer, and James Thomas is the editor. SteveSaklad is the production designer, and Don Burgess, A.S.C., is the director of photography.

For more than 85 years, The Walt Disney Studios has been the foundation on which The Walt Disney Company (NYSE: DIS) was built. Today, the Studio brings quality movies, music and stage plays to consumers throughout the world. Feature films are released under four banners: Walt Disney Pictures, which includes Walt Disney Animation Studios and Pixar Animation Studios; Disneynature; Marvel; and Touchstone Pictures, which includes the distribution of live-action films from DreamWorks Studios. Original music and motion picture soundtracks are produced under Walt Disney Records and Hollywood Records, while Disney Theatrical Group produces and licenses live events, including Broadway theatrical productions, Disney on Ice and Disney LIVE!.  For more information, visit www.waltdisneystudios.com.