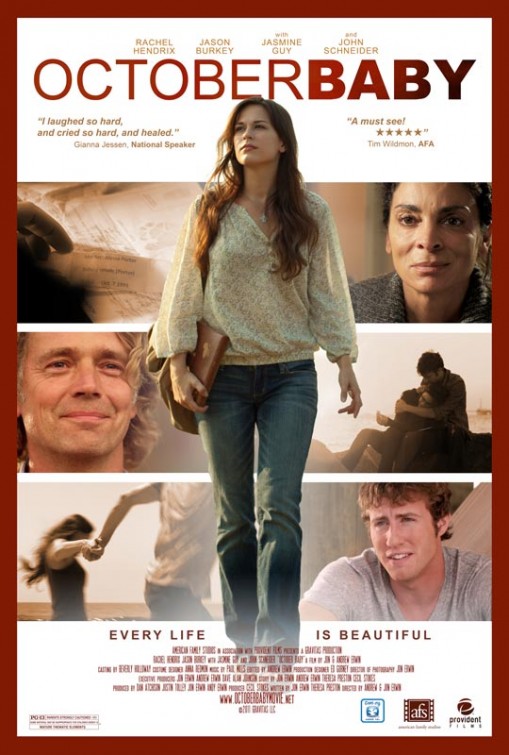 NASHVILLE – Jan. 11, 2012 – From award-winning directors Jon and Andrew Erwin comes OCTOBER BABY, a groundbreaking, life-affirming movie premiering in theaters nationwide March 23, 2012. Provident Films—known for its association with such hit faith movies as COURAGEOUS and FIREPROOF—and Samuel Goldwyn Films (distributor of such hit faith films as FIREPROOF, AMAZING GRACE and FACING THE GIANTS among others) have signed on to market and distribute.

A production of the Erwin Brothers and American Family Studios, OCTOBER BABY weaves a dramatic, romantic, humorous story of one young woman’s search for the truth after a life-changing discovery rocks her world.

“OCTOBER BABY is the story of 19-year-old Hannah, who finds out she is adopted and is the survivor of an attempted abortion,” said co-director and co-writer Jon Erwin. “So, she goes on a road trip to find answers, locate her birth mother and, ultimately, discover how powerful forgiveness can be.”

OCTOBER BABY offers viewers an enjoyable, entertaining, intensely human film about friends hitting the road together and finding more than they bargained for: adventure, romance, truth . . . and the power to forgive. But, the film is more than that—it tells the story of one young woman’s journey based on hundreds of stories of abortion survivors. OCTOBER BABY honestly and evenhandedly invites audiences to explore their own views of life’s value and the importance of their choices.

“We’re thrilled to introduce these exciting, young filmmakers to audiences nationwide,” said Meyer Gottlieb, president of Samuel Goldwyn Films. “OCTOBER BABY is one more example of Samuel Goldwyn Films’ commitment to releasing films with a dedicated audience. That, coupled with getting to collaborate with Provident once again, made this a homerun for us.”

In support of the film’s life-affirming theme, the producers of OCTOBER BABY have assigned 10 percent of the profits of the film to the Every Life is Beautiful Fund. The money will be distributed to frontline organizations helping women face crisis pregnancies, life-affirming adoption agencies and those caring for orphans.

“We feel like it’s very important to use OCTOBER BABY as an opportunity to serve, give back and save lives,” Jon Erwin said. “That’s what we want the Every Life Is Beautiful Fund to be about.”

Mark Hall of Casting Crowns
“I am now an OCTOBER BABY activist. This is something I have to be a part of.”

The Dove Foundation
“We urge you to see this movie. It might just change your life.”