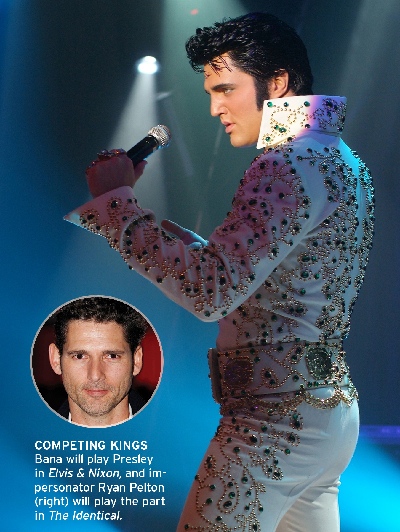 Nashville, Tenn. (Nov. 22, 2011) – Despite a shroud of secrecy and discretion, news has broken of an upcoming City of Peace Films project about an Elvis Presley impersonator. This week The Hollywood Reporter featured the film, titled The Identical, in a prominent article about four films in varying stages of development about the King of Rock n Roll.

Considered the most reputable news source for the TV and film industry, The Hollywood Reporter revealed the news that “The Identical, a $3 million indie project from City of Peace Films, is taking a surprise approach: the faith-based route…(and) focuses on Presley’s interest in gospel music and his religious roots.”

The Hollywood Reporter announced that The Identical will star Ryan Pelton, an actual Elvis impersonator, and that plans call for the film to include licensed Presley music, both covers and original recordings. The Identical script has been adapted by Space Cowboys screenwriter Howie Klausner.

“We’ve been very excited about this project at City of Peace Films since breaking ground in development in 2010, but I cannot comment further for now as the production continues to unfold,” says City of Peace Films President Yochanan Marcellino. “However, since The Hollywood Reporter broke the story without any initiation from us, it’s clearly God’s timing for word of this film to start getting out.”

The Identical joins Fame & Fortune, Last Train To Memphis and Elvis & Nixon (starring Eric Bana), the other films featured in the article, for projected production in 2012.

Photo Caption: An image from the story in The Hollywood Reporter features The Identical star Ryan Pelton along with Hollywood star Eric Bana (inset), set to star in one of the competing Elvis movies.

The primary focus of City of Peace Films and City of Peace Media is to provide a framework where music, films and video with “redeeming value” can be developed, produced and distributed worldwide, bringing a message of hope, love and encouragement to this generation.

For more information about City of Peace Films, visit cityofpeace.com.