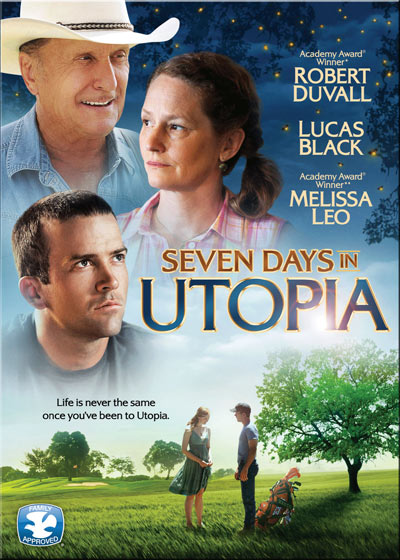 NASHVILLE – Nov. 11, 2011 – SEVEN DAYS IN UTOPIA will be available on DVD at all major retailers on Nov. 29, 2011.  The G-Rated family-friendly movie about life, love and faith has been called “an inspirational movie about God’s mysterious ways . . . and how significance will always trump success!” by Jim Daly, President, Focus on the Family.

SEVEN DAYS IN UTOPIA follows the story of Luke Chisolm (Lucas Black), a talented young golfer set on making the pro tour.  When his first big shot turns out to be a very public disaster, Luke escapes the pressures of the game and finds himself unexpectedly stranded in Utopia, Texas, home to eccentric rancher Johnny Crawford (Robert Duvall).  But Johnny is more than meets the eye, and his profound ways of looking at life, love, and faith force Luke to question not only his past choices, but his direction for the future.

“I was attracted to this because it’s a great tale about a man’s journey, and about how you survive life’s unexpected curve balls,” Duvall said.

SEVEN DAYS IN UTOPIA reunites Duvall and Black, previous co-stars in SLINGBLADE and GET LOW. The film also features True Blood‘s Deborah Ann Woll as Sarah Hawkins, a beautiful young citizen of Utopia who helps Luke get back in the game. Melissa Leo plays Woll’s mother, Lily, who once similarly helped Duvall’s character.

Shot in the beautiful Texas Hill Country (in part, in the real town of Utopia), SEVEN DAYS IN UTOPIA not only tells a story of faith in the face of life’s challenges, it delivers some of the most realistic golf scenes on film.  To accurately capture the game at the pro level was essential for Cook, the film’s executive producer and co-writer. Cook is a nationally recognized mental training coach, named a Top 10 Mental Game Expert by Golf Digest. He wrote Golf’s Sacred Journey—Seven Days at the Links of Utopia, the novel serving as the basis for the film.

Director Mathew Dean Russell, a creative visionary known for his visual effects on such films as NIGHT AT THE MUSEUM and LIVE FREE OR DIE HARD, was equally fixed on sports accuracy.

“We were 100 percent committed to getting everything right,” said Russell, “from the arc of a pro swing to the language golfers really use.”

Besides the top-flight cast of Hollywood stars, SEVEN DAYS IN UTOPIA features PGA of America pro golfers such as K.J. Choi and many other celebrity golfers.

In addition to outstanding Hollywood and PGA talent, the film features a new recording of the hit song “Born Again” by Third Day.

“Life is never the same once you’ve been to Utopia.”