DISNEY TO RELEASE TWO AMAZING CLASSICS FROM THE VAULT IN 2012…

LADY AND THE TRAMP & CINDERELLA 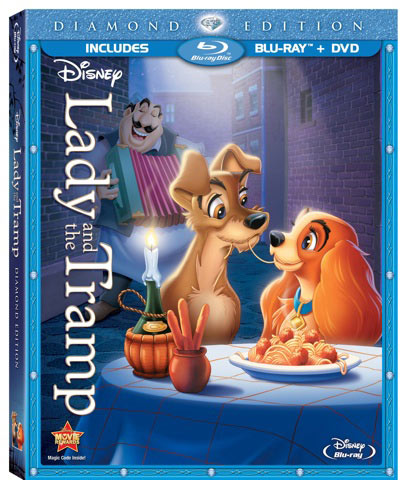 Burbank, Calif. , November 11, 2011 – The Walt Disney Studios proudly announces the
addition of LADY AND THE TRAMP and CINDERELLA to its coveted, cutting-edge Blu-ray™
Diamond Collection line-up of animated classics. Released from the Disney vault for a limited
time only, the lovingly pampered cocker spaniel and the mutt from across the tracks will unveil
on February 7, 2012 and Cinderella’s clock will strike midnight in Fall 2012.

To date, the company has released four Diamond Edition titles –

Snow White and the Seven
Dwarfs, Beauty and the Beast, Bambi and The Lion King .

About Lady and the Tramp :
Generations of fans have fallen in love with Disney’s 15th animated masterpiece — an irresistible
song-filled adventure about Lady, a lovingly pampered cocker spaniel, and Tramp, a roguish
mutt from across the tracks.

When Aunt Sarah moves in with her devious felines Si and Am to baby-sit, the very protective
Lady soon finds herself being fitted for the unthinkable — a muzzle! In her bid for freedom, she
meets and is charmed by Tramp, dog-about-town. Together with friends Jock, Trusty, and Peg,
they share thrilling adventures on an enchanting evening as Lady learns what it means to be
footloose and leash-free.

bout Cinderella :
Disney’s Cinderella has enchanted generations with its unforgettable story, Academy Award®-
nominated music (1950 for Scoring of a Musical Picture, Song “Bibbidi-Bobbidi-Boo,” and Sound
Recording) and endearing characters. With a wave of her wand and some “Bibbidi-Bobbidi-
Boo,” Cinderella’s Fairy Godmother transforms an ordinary pumpkin into a magnificent coach
and Cinderella’s rags into a gorgeous gown, and then sends her off to the royal ball. But
Cinderella’s enchanted evening must end when the spell is broken at midnight. It will take the
help of her daring animal friends Jaq and Gus and a perfect fit into a glass slipper to create the
ultimate fairy tale ending.

These press materials are available in electronic form at www.WDSHEpublicity.com.

LADY AND THE TRAMP FACT SHEET

“One of the great classics…more glorious than ever in dazzling Disney Blu-ray High Definition!”
–Clay Smith, The Insider

Synopsis: A classic love story unfolds in the best Disney tradition as a lovely young pedigreed
cocker spaniel named Lady, who lives a pampered life, finds herself falling romantically
for Tramp, an amorous street-smart pooch without prospects. Although they have fun
together on several dates, including a sentimental spaghetti dinner by moonlight at
Tony’s restaurant, their relationship is strained not only by Lady’s loyalty to her human
family and their newborn baby, but by Tramp’s devil-may-care attitude that eventually
gets Lady in trouble and tossed into the dog pound. However, good-hearted Tramp
redeems himself by saving the baby from potential harm and thus wins Lady’s love and
the affection of her human family.

Share this timeless Disney Classic with your family as Walt Disney’s beloved classic,

Lady and the Tramp , finally releases from the Disney Vault for the first time ever on
Blu-ray. This heartwarming tale now charms a new generation of families and fans
with its exquisite animation and unforgettable songs in one of the greatest love stories
of all time.  Featuring high definition sound and immersive bonus features your family
can enjoy together, Lady and the Tramp Diamond Edition is a must own addition to
your Disney collection.

*This feature may not be available in all territories.