“The best romantic comedy of the year.”

ON NOVEMBER 1ST FROM 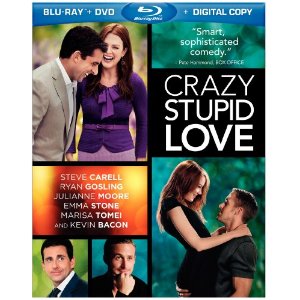 Burbank, CA, September 19, 2011 – Crazy, Stupid, Love, the perfect combination of sexy and cute, will be available on Blu-ray Combo Pack, DVD and Digital Download November 1 from Warner Home Entertainment Group. Adapted from a screenplay by Dan Fogelman (“Cars” films), Crazy, Stupid, Love is a critically acclaimed romantic comedy-drama that follows a man’s perfect life unraveling after he discovers his wife is having an affair, turning his whole world upside down.

The Blu-ray Combo Pack and DVD include an UltraViolet Digital Copy of the standard definition theatrical version of the film, which allows consumers to download the film to a PC or Mac plus instantly stream it from a digital cloud to many computers, tablets or smartphones.

At fortysomething, straight-laced Cal Weaver (Carell) is living the dream—good job, nice house, great kids and marriage to his high school sweetheart. But when Cal learns that his wife, Emily (Moore), has cheated on him and wants a divorce, his “perfect” life quickly unravels.

In today’s single world, Cal, who hasn’t dated in decades, stands out as the epitome of
un-smooth. Spending his free evenings sulking alone at a local bar, the hapless Cal is taken on as wingman and protégé to handsome lothario Jacob Palmer (Gosling). In an effort to help Cal get over his wife and start living his life, Jacob opens Cal’s eyes to the many options before him: flirty women, manly drinks and a sense of style that can’t be found at Supercuts or The Gap.

Cal and Emily aren’t the only ones looking for love in what might be all the wrong places: Cal’s 13-year-old son, Robbie (Bobo), is in love with his 17-year-old babysitter, Jessica (Tipton), who harbors a major crush of her own… on Cal. And even Jacob’s new-woman-every-night modus operandi is challenged when he tries his best lines on Hannah (Stone), a girl he just can’t seem to get out of his mind—maybe because she’s the first woman he’s ever met who doesn’t think this professional player has any game.

Crazy, Stupid, Love will be available on Blu-ray Combo Pack, featuring a hi-definition, a standard definition and a digital copy of the film, for $35.99 and on single disc DVD for $28.98.

On November 1, Crazy, Stupid, Love can be purchased for permanent download or rented on iTunes, Amazon Instant Video, and Xbox 360 and PlayStation 3 game consoles.

It will also be available to rent via kiosks and subscription on November 29, 2011.

The film is also available for download from online digital retailers including iTunes and Amazon Instant Video. On iTunes it will be available with Extras including The Player Meets His Match and Deleted Scenes.