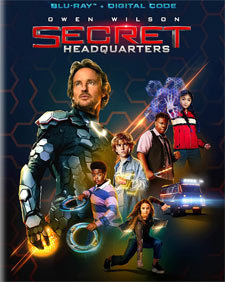 Friendship and courage take center stage when Charlie and his friends stumble upon the headquarters of the Guard (Owen Wilson) and realize the world’s most powerful superhero is Charlie’s dad. When an evil businessman (Michael Peña) sends in a team to infiltrate the lair and retrieve the Guard’s energy source, the youngsters spring into action and turn the tables on the intruders. (from Paramount Pictures)

I get it. I’m probably not the intended target for this kind of movie, so I may not be the best judge of Paramount+’s original movie, Secret Headquarters. But, in all fairness, studios frequently make family films that are great for all ages – even adults – be it animated movies from Pixar or DreamWorks, or live action movies like National Treasure and Lyle, Lyle Crocodile. Secret Headquarters is one of those movies geared almost exclusively toward a distinct age group, in this case, the thirteen to fifteen “young adult” age. The basic plot of Secret Headquarters follows the son of a superhero who accidentally finds his father’s “secret headquarters” when he stumbles upon a mysterious elevator while with some of his friends. Of course, they end up playing with any gadget they find and quickly grab the attention the story’s main villain, who is trying to find this superhero’s power source. And, of course, mayhem ensues. 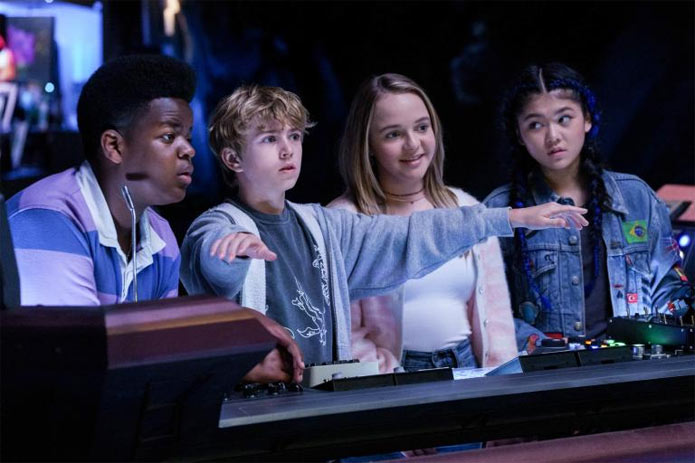 In the very first scene, Secret Headquarters finds Owen Wilson’s character, Jack, his wife Lily and their son Charlie camping in the woods when very suddenly a collision happens in the sky above them and a crash happens in the distance. Jack runs off alone to see if anyone involved in the crash needs help, and he finds a wounded soldier named Irons. The two then investigate a crashed UFO and a mysterious alien orb emerges to choose a host. It first scans Irons and finds him unworthy, and then it scans Jack, finding him to be just what it’s looking for. And with that, a superhero is born. This all happens within the first couple minutes of the movie, with barely a second to get to meet these characters. The movie then jumps ahead TEN YEARS, completely breezing over Jack’s life as a superhero – named The Guard – and we find a now-fourteen-year-old Charlie in middle school. We quickly learn that Jack and Lily divorced, Charlie doesn’t know Jack is The Guard, Charlie idolizes The Guard, and resents his father always being busy with work. Wilson is almost completely sidelined right away and disappears for the bulk of the film, allowing Charlie and a few of his thinly-developed friends to stumble upon the secret headquarters and struggle to deal with a home invasion from the movie’s main villains. 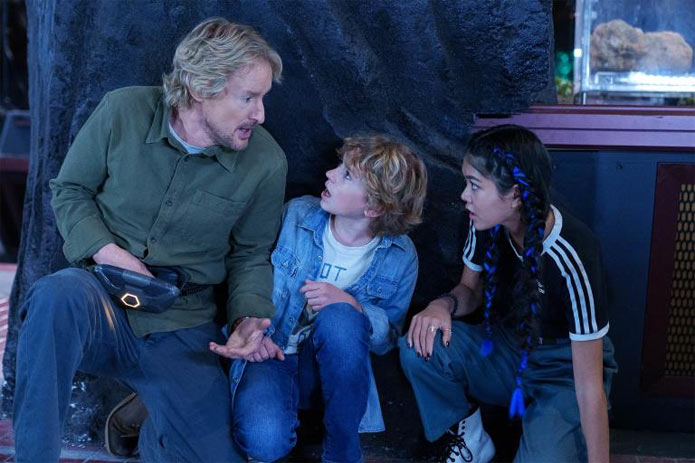 My problem with the movie is that there isn’t really enough of an appeal with the young main cast to warrant watching just them for most of the movie. Sure, I admit I’m a longtime fan of Owen Wilson and was disappointed that he sits out most of the movie, but the kids and their relationships with each other just aren’t very interesting. And since Charlie borderline hates his father, it’s tough to warm up to the kid who doesn’t realize his dad is the very person he idolizes (which sounds a lot like The Legend of Zorro, by the way). Since we know his dad is a hero and is sacrificing his family for the good of mankind, it seems unfair how little respect Charlie has for his dad. However, it’s hard to believe Jack has kept his super-secret for a decade of Charlie’s life, when just letting him in on things would help explain so much. All of this makes the movie more frustrating at times than enjoyable, and with me being an adult viewer, not much happens with the young teens that seems like it’s more interesting than whatever problem The Guard has flown off to fix. And since the movie opens in a way that makes the unknowing viewer think that Wilson’s character might have a big focal point in the story, it’s kind of a bait-and-switch when the story becomes all about the kids. And, honestly, that might be fine if the movie were more like Super 8 or E.T. or Stranger Things, but these kids aren’t all that endearing or interesting to watch, so most of their scenes are kind of a bore. It’s really not until the last act when an Ant-Man-style action climax shows us who The Guard actually is as he comes up against Michael Peña’s Argon who fights The Guard in one of his suits. The tone is kept mostly light, and the fight gets pretty silly at times (and not always in a good way), but having Wilson back on screen just shows – at least to this viewer – how much more he brings to the screen than the main kids.

I often like seeing Michael Peña in movies, but there’s been a weird trend of casting him as a villain that I don’t think really works (last year’s Tom and Jerry is a good example, but to be fair, that movie called for a sillier “villain”). He’s a fun actor – and I love his character in the Ant-Man movies – but when he plays the villain, it’s a strange mix of serious and silly. It seems like he should really stick to one or the other. Because Peña, as a villain, isn’t all that menacing — especially when he’s cracking jokes. I really liked Walker Scobell in The Adam Project from earlier this year, but he didn’t work as well here as a central character. Whether that was because the other characters around him also didn’t stand out, or it was just his performance, I don’t know, but I don’t feel it worked all that well. 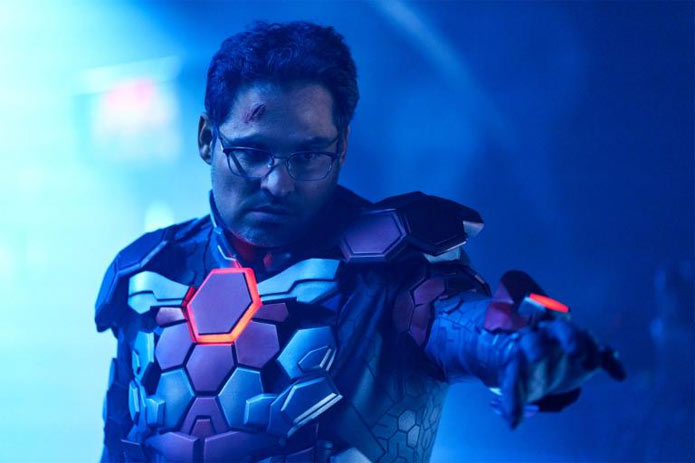 The content for Secret Headquarters is pretty PG family friendly. However, there is some language, including a partial use of the “S” word from Charlie, and a handful of uses of “h*ll” and “d*mn,” among other cuss words. There isn’t really any sexual content, so the main red flag is some of the violence. The only kind of bloody moment is when a man takes an energy blast to the shoulder and we see his torn shirt with some blood soaked on it. Another character comes to their aid and dabs it with a cloth before cauterizing the wound off screen, but it still might be a little intense for some viewers. A bad guy also suddenly shoots and kills another bad guy off screen, but we then see the dead body lying on the floor behind other characters. Very little of the violence ever shows blood though — beyond a few scrapes and cuts.

Secret Headquarters really isn’t a bad film, but it’s much more of a niche movie for a very specific age group. Again, while some family movies work for all ages, this one doesn’t quite cut it. And for anyone tuning in because of Owen Wilson’s top billing, the fact that he’s really only in the beginning and end will surely be a disappointment. If you’re looking for a family-friendly, kid-centric superhero movie, look no further than Secret Headquarters. Chances are, younger audiences will appreciate it. But if you are looking for something a little more serious or memorable, maybe check out Black Panther: Wakanda Forever instead.

Secret Headquarters is available on Blu-Ray, DVD, and Digital. I was pleasantly surprised to see that the digital copy that came with the Blu-Ray disc is actually a 4K UHD digital copy! The Blu-Ray disc, as well as the iTunes digital copy includes the following extras:

Sex/Nudity: A kid says he goes by “Big Mac” because he’s “the tastiest Berger” (his last name is Berger); Argon tells Charlie there’s a vibe between him (Charlie) and a girl “and it’s hot”

Alcohol/Drugs: When they find a high tech printer, Lizzie, a young teen asks if it can print a fake ID.

Blood/Gore: We see a man with some blood on his head; A softball goes so fast it splatters a fly in mid-air; We see blood on Argon’s forehead for a good portion of the last half of the movie; A man is shot in the shoulder with an energy blast and we see some blood on their clothes around the wound; A school teacher purposely hits Argon right in his bloody head wound; We see a small bloody cut on Charlie’s cheek.

Violence: We see an explosion in the sky and a plane crash in the distance; An orb explodes and throws a man backwards. His face seems a little burned and he’s knocked unconscious; At a softball game, a batter hits Charlie in the stomach with a ball that is hit off his bat; A girl straps on a jet pack and flies around out of control and accidentally kicks Charlie, knocking him over; Charlie smashes a ceramic mug in anger; A softball goes so fast it splatters a fly in mid-air, goes through a glove, and then through several walls and smashes a broom handle and a coffee cup; Charlie drives recklessly in a van (plus he’s underage); We see a bug on the ground and then a foot step out of a car onto it, crushing it; A man is shot and killed off screen; Two kids are cuffed by adults; Charlie punches Berger in the stomach; Berger accidentally pulls a metal chair and throws it into a man, knocking him out; We see a man strapped to a chair. One of the kids rips duct tape off his mouth and he reacts in pain; The kids use the magnetic stick on him, causing pain; A grenade goes off and throws the kids backwards; The kids and the bad guys exchange fire. Lizzie kicks the female villain in the crotch; One of the boys hits a thug in the head with a pool ball; A guy shoots at Berger thru a portal; Big Mac pulls a guy’s pants down with a magnetic wand. He then when whips him in the face with his belt buckle. Then the kids use the portal on his head and beat his head inside a school locker on the other end of the portal; A man touches the alien power source and it gives him some violent visions of events in the future; Characters point guns at another character; One of the portals is blasted by a wrist cannon and destroyed; The Guard blasts a couple people into portals and makes a shield that the bad guys shoot at it; A man is shot with a blast to the shoulder. We see their clothes are burned with some blood; A man heats a knife to cauterize the other man’s wound. We don’t see this happen but we hear the victim yell in pain; Two of the kids are almost crushed in a plastic box; A school teacher purposely hits Argon right in his bloody head wound; Argon shoves a kid out of his way; Argon flips a table over. He’s then hit in the head with a dodgeball; Jack is hit in the stomach with a ball and then he fights back using a mop and then is hit in the face, followed by being thrown backwards; A truck drives thru a wall; While both are wearing super suits, Guard shoots Argon and he flies through a wall. He then punches him into a locker. They then fight each other; Guard slams Argon’s head into a water fountain then blasts him across the floor; An explosion throws a group of people backwards and it transports a person to another dimension.