for his Performance in ‘The Mulligan’ 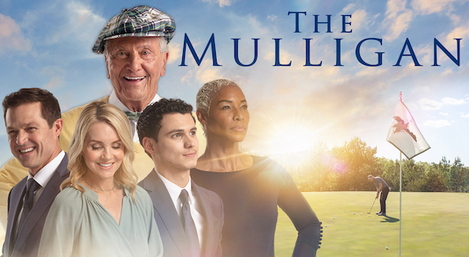 LOS ANGELES, CA October 3, 2022 – The Canadian International Faith & Family Film Festival (CIFF) has awarded Pat Boone with the honor of Best Supporting Actor for his role of The Old Pro in the film THE MULLIGAN. An inspiring story about second chances, THE MULLIGAN also received five other nominations at the festival.

“I so enjoyed being a part of The Mulligan,” shared Boone. “The entire team made the film a great experience, and what could be more important than a message that we have hope? That, even when we feel like our lives are off track, God offers us second chances. Mulligans. I also never turn down a chance to spend time on a golf course!”

Pat Boone is a legendary American singer, composer, actor, writer and spokesman whose career has spanned 7 decades. He was a #1 pop singer in the United States during the 1950s and early 1960s. He sold more than 45 million records and had 38 top 40 hits, including 6 number one records, and 13 “million sellers”, or gold records. In addition, Boone appeared in more than 15 Hollywood films.

After a successful national theatrical launch, THE MULLIGAN released on DVD, Digital, and On Demand on August 16th through Cinedigm. Based on the novel by Ken Blanchard and Wally Armstrong, the film adaptation has received both critical and consumer acclaim, hailing a 100% Fan-rating on Rotten Tomatoes.  Directed by Michael O. Sajbel (The Ultimate Gift, The Ride), and co-written by Randall Eldridge, Rick Eldridge (The Ultimate Gift, Bobby Jones: Stroke of Genius), Roland Eldridge and Jimmy Hager, the film also stars Eric Close  (American Sniper, Nashville), Tanya Christiansen (I Still Believe, The Hate U Give),  Andrew Brodeur (Tall Girl, MacGyver), Charmin Lee (Westworld, The 5th Wave) and Debra Stipe (Full House, Father Figures), with guest appearances by PGA Professional Tom Leyman and Broadcasting legend Jim Nantz. The Mulligan was produced by Scotty Curlee, Eldridge and Stephan Schultze, with Eldridge also acting as Executive Producer.

THE MULLIGAN shares the story of Paul McAlister who outwardly has everything that he could possibly want. He’s a successful businessman, motivational speaker and superstar on the golf course. But behind the persona, his world has fallen apart and his estrangement from his family has left him desperate to find anything to fill the void.  When he gets teamed up with an old golf pro (Pat Boone – A Cowgirl’s Story, God’s Not Dead 2), Paul begins to realize that there is still time to set his world right…there’s still time for a mulligan.

The Canadian International Faith & Family Film Festival (CIFF) has a mission to showcase, promote, educate, and encourage appreciation of faith, family, and independent films. Every year at the CIFF Film Festival we exhibit and celebrate the most outstanding faith and family content produced in every part of the world.  Films are selected and nominated by a panel of judges on the basis of content quality, and originality.

THE MULLIGAN is distributed through Cinedigm, and is available on DVD and available to rent or purchase on most major streaming platforms including Google Play, YouTube, Redbox, Prime Video and Apple TV.

For more than 20 years, Cinedigm (NASDAQ: CIDM) has led the digital transformation of the entertainment industry. Today, Cinedigm entertains consumers around the globe by providing premium feature film and television series, enthusiast streaming channels and technology services to the world’s largest media, retail and technology companies. As a leader in the rapidly evolving streaming ecosystem, Cinedigm continues its legacy as an innovator through its adoption of next-generation technologies, such as artificial intelligence and machine learning, through its proprietary, highly-scalable Matchpoint™ technology platform. For more information, visit cinedigm.com.