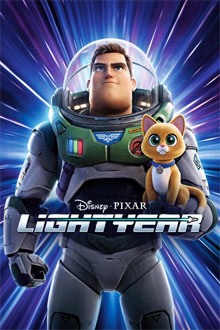 While spending years attempting to return home, marooned Space Ranger Buzz Lightyear encounters an army of ruthless robots commanded by Zurg who are attempting to steal his fuel source. (from IMDB)

Pixar’s latest effort, Lightyear, has been polarizing audiences since its release. The first moments of the movie reveal to the audience via white text on a black screen that little Andy from 1995’s Toy Story became a Buzz Lightyear fan because he watched a Buzz Lightyear movie… and this is that movie. However, there’s so much about this movie that doesn’t seem to line up with the original Toy Story that you have to wonder if the filmmakers even watched the original film.

For starters, Tim Allen’s iconic voice performance as Buzz Lightyear for all 4 Toy Story movies, the three Toy Story Toons animated shorts, and the two holiday specials has been replaced by Chris Evans. I love Evans as Captain America, and he is able to capture some of the spirit of Buzz here, but he just isn’t Tim Allen — and for that matter, Buzz Lightyear. So if this is the movie that made Andy a Buzz fan… why do the toys have a different voice than the one in the movie? Sure, that sometimes happens with toys, but that actually makes Allen’s Buzz generic and inauthentic. That would kind of imply that Allen’s voice is a knock-off of Buzz. And let’s face it – that’s just offensive to consider. Then there’s the fact that Buzz has a cat companion named Sox in this movie. Sox is cute, funny, and lovable, so why wouldn’t Andy have gotten a toy of that? And how come we’ve NEVER heard of Sox from Buzz before? (Heck, they could make an entire Toy Story adventure where Buzz tries to find his missing toy, Sox!) Also, with this movie being from 1995 or earlier, the effects are infinitely better than anything we would have seen back then. This is a minor gripe, but that then brings up another cultural consideration: No kids movie in 1995 would have featured a lesbian as a main character, let alone Buzz’s partner. The movie is anything but subtle about this, and keeps pushing to make sure no one misses the fact that Hawthorne gets engaged to a woman, marries her, somehow has a child with her, and celebrates an anniversary with her (complete with a quick kiss on the lips). This is 2022 nonsense, not anything even Disney would have tried to push in 1995. Lastly, there’s the big baddie, Zurg, which is completely ruined here. He was a cool adversary for Buzz in the Toy Story movies, but they completely rewrite who the character is here – to the point where nothing in the Toy Story movies makes sense for Zurg. I just don’t get how they greenlit this movie at all. The Pixar quality we’ve come to expect from the studio is just not here.

The plot is a grim and surprisingly “simple” one. It revolves around Buzz making a mistake and causing his team to get stranded on a strange planet. And as they test different kinds of fuel to hopefully allow them to jump to hyperspace, each time Buzz takes to the stars for a short test-run, he returns to the planet below to find that 4 years have passed. It feels a lot like that terrible 1998 theatrical version of Lost in Space-meets-Interstellar-meets-The LEGO Movie 2. If you think that sounds like a weird combination, it definitely is. Not surprisingly, the movie has the feel of a Star Trek episode (or one of the lesser feature films), and seems to be missing the charm of what you’d expect from a Buzz Lightyear feature story. The best character next to Buzz is undoubtedly his robot cat, Sox, voiced by Peter Sohn. Sox offers the best comedic relief in the film. Other than this pair, the characters aren’t very memorable. I often find Taika Waititi amusing, but even he couldn’t elevate his character, Mo Morrison, who just wasn’t that funny (when he’s supposed to be). The movie does offer a couple laughs — my favorite being when Buzz removes his navigating system IVAN and blows on it like an old Nintendo game cartridge and puts it back into the console where it starts working again — but, for the most part, Lightyear just isn’t that funny (when it should be).

So… is there anything good about Lightyear? Aside from spectacular animation and visuals, and a solid voice performance from Evans, Lightyear works decently as a standalone sci-fi adventure. Forget that it’s supposed to be the beloved Buzz Lightyear and the movie really isn’t that bad. Still, due to its forgettable premise, downer storyline, and unoriginal ideas, you would never guess it’s a Pixar movie. I think we’ve actually come to a point where Disney’s own animation studio is finally putting out better movies than Pixar — and that hurts to even consider. Lightyear‘s story – and it’s “twist” – is hardly unique (which is why I named those three other sci-fi movies earlier), but as an entertaining action adventure for kids, it mostly works. Again — you’d just have to forget it’s supposed to be our Buzz Lightyear.

The content for Lightyear isn’t too bad, apart from the aforementioned lesbian side plot. Early in the story, once Buzz returns from his first mission attempt when four years have passed, Alisha Hawthorne exclaims to him, “I got engaged!” and flashes a diamond ring at Buzz. His immediate, nonchalant reaction is “That’s great! What’s her name?” It’s played off as completely normal that Alisha would have a fellow female fiance. There’s then a montage that shows the women together while one of them is pregnant, then with a child, then later celebrating their anniversary when we see them briefly kiss on the lips. After this segment, that relationship is never mentioned again (and there are no other same-sex relationships shown), but Disney has made it clear enough that kids will have a hard time missing it — and who knows if parents are ready for that conversation with their kids. It’s so frustrating that this studio just keeps pushing to normalize the same-sex lifestyle — especially to children. Otherwise, there is no profanity (although a couple uses of “Shoot!” had me checking the subtitles to be sure, since they sounded awfully close), but there is quite a bit of action violence. At one point, Buzz even has a couple bloody cuts and abrasions on his face, but it isn’t especially graphic. Otherwise, we see green goo splatter when large moving vines are sliced, and purple blood splatter when large insects are shot or sliced.

Ever since the first trailer for Lightyear was released in 2021, I wondered why this even had to exist, but I knew it was Pixar and I was hoping for the best. However, this movie seems haphazardly planned (and spiteful in its social politics-pushing), and one that tarnishes the legacy of Buzz Lightyear — from the character and voice to his arch-nemesis, Zurg. If you’re not too attached to the characters and just love a decent sci-fi movie, Lightyear just might scratch your itch. Otherwise, it’s a frightfully misguided and altogether forgettable Pixar effort. By the way, if you do decide to see the movie, there’s a mid-credits bonus scene, a scene after the credits, and then yet another little scene after the Disney logo that plays after the post-credits scene. (That last one teases a potential future adventure.)

Sex/Nudity: Buzz asks Alisha about her getting engaged and knows to ask “what’s her name?” They talk about how Alisha met her lesbian fiance in the time Buzz was away; We see Alisha pregnant with her wife; While older and celebrating their anniversary, we see two women briefly kiss on the lips;

Blood/Gore: We see green “blood” splattering as vines are cut; Hawthorne and Buzz slice large bugs in half with burned marks on some and purple blood splashing when they’re shot with a laser pistol; We see purple blood when Alisha shoots a bug; Vines grab Buzz and drag him across the ground before someone slices it, causing green blood to splatter; We see some bloody scrapes on Buzz’s face

Violence: Buzz and Alisha cut moving vines with swords; Vines wrap around the legs of their ship and start pulling it into the ground; Vines pull a guy underground; We see green “blood” splattering as vines are cut; Buzz is caught by a vine. Hawthorne slices the vine that grabbed Buzz and then large bugs come out and they slice them in half with burned marks on some and purple blood splashing when they’re shot with a laser pistol; We see purple blood when Alisha shoots a bug; Buzz and the rookie get pulled underground by vines and Buzz slices his way out; Their ship struggles to pull up and it then crash lands; Vines grab Buzz and drag him across the ground before someone slices it, causing green blood to splatter; The same thing happens to a random guy and we see him dragged away; Vines grab Buzz and drag him again, and the vines get cut again; Guards kick open a door; Sox shoots a tranquilizer dart at someone and it hits their neck and they fall over; Someone tackles Buzz and pushes his face in the dirt; A robot grabs Buzz. Izzy shoots it, but it’s just a paint gun since she’s still in training; The robot’s arm is cut off and goes haywire. It shoots a satellite dish and cuts through a rock. They shoot a spear at a robot and it falls over; Zurg smashes a console in anger; Large bugs chase the cadets. Mo pulls a string that inflates his suit. They then roll him thru a large number of bugs; Buzz and his friends are imprisoned in cone-shaped rays that hold them in place. They use them to slide across the room and smash a console. It causes an explosion and part of the room breaks apart and falls away, causing Buzz to almost fall to his death; Mo accidentally knocks Sox over and freaks out that he may have broken him; An explosion knocks Buzz and Izzy over; A cannon shoots and knocks over Zurg; A robot is shot with a rocket launcher; A grenade is tossed at robots that cuts two in half; A ship flies into a robot; Another robot is shot and crashes into another robot; Buzz shoots a rocket with his arm cannon; A robot claw on a robotic line grabs Buzz and he’s beamed away. Buzz shoots at Zurg with his arm cannon; An old man is hit in neck with a dart; A ship beams to a location where it lands on top of a pile of robots; A small robot is crushed under the foot of a bigger robot; Zurg grabs Buzz by the face; Zurg throws Buzz into a console, smashing it; Zurg hits Buzz into the ground. Buzz shoots him; Zurg shoots at Buzz. When he tries to get away, Zurg tears up the floor to get to him; Buzz is grabbed by a claw again. He uses a device to cut it; An explosion tosses Buzz; Fire causss Buzz to fall out of the ship. Zurg attacks the ship; Buzz shoots a power source, potentially killing Zurg; Burnside shoots a robot that falls over; A bug creature flies into the laser shield and fries; We see the eyes and mouth of a presumably dead robot suddenly light up.