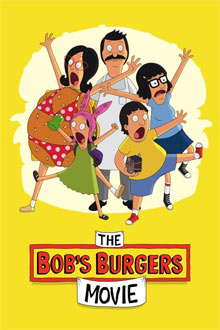 The Belchers try to save the restaurant from closing as a sinkhole forms in front of it, while the kids try to solve a mystery that could save their family’s restaurant. (from IMDB)

When it comes to modern animated series, I have to say there aren’t too many I follow (if any, really). Titles fitting that description that come to mind are Family Guy, American Dad, Futurama, and Bob’s Burgers. Either the edgier humor isn’t my cup of tea, or I just don’t find it all that funny. So it should surprise you to see me writing a review for something like The Bob’s Burgers Movie. In all honesty, Disney’s PR team sent us a digital copy to review, so that is the only reason why I watched it. So, dear reader, please keep that in mind if you read on.

A good friend of mine is a devoted fan of Bob’s Burgers, and he and his wife ventured out to see the new movie when it was in theaters. According to him, he really enjoyed the film, so I take it that it lands pretty well with fans. For me, an outsider of the franchise, though, it was sort of like watching The Simpson’s Movie — another animated series I never could get into. These more adult-targeted series can be more crass at times, including sexual gags and even some profanity (with some series being far more explicit). I’ve seen probably a total of one, maybe two episodes of the Bob’s Burgers show that my friend had showed me, and I could tell then that it just wasn’t my cup of tea. I love quirky humor, but this is definitely a whole nother animal. For example, the animation is a flat, 2D style animation that isn’t refined like something any 80’s or 90’s kid may have grown up watching from Disney, with all of the characters having these extremely wide eyes and almost dead stare all the time. The story centers around an independent burger business run by a family called The Belchers (ha…), with all of the characters in the family – men and women – being voiced by men, save for one of the daughters, Louise, being voiced by Kristen Schaal. Otherwise, Bob’s wife Linda is voiced by John Roberts, and daughter Tina is voiced by Dan Mintz. It’s weird. I get that that is part of the humor of the series, but it’s a tough adjustment hearing masculine voices coming from a little girl and her mom.

OK, so all of that said, I tried to approach The Bob’s Burgers Movie with as open a mind as I could, and was ready to be entertained or won over by The Belchers. Unfortunately, I think it’s just one of those things where you really have to have had prior investment in these characters to truly be able to enjoy it. As my friend warned me before I watched this, there have been 12 seasons of Bob’s Burgers prior to this. And while I expect full well for there to be things about this movie that only faithful fans can appreciate, I aimed to approach it mentally as a standalone movie. So, as a standalone story, I think it’s fine, and it works, but I can understand that it’s kind of like reading just one chapter out of a much longer and involved story.

The Bob’s Burgers Movie plot centers around the struggles the Belchers are going through when a sinkhole forms right outside their restaurant, making it impossible for patrons to get inside. Meanwhile, young Louise is trying to prove to her peers that she’s not just a “baby” anymore, and ventures into the hole only to uncover a body that leads to a murder mystery. It makes for an entertaining hour and 40 minutes, but it probably plays out mostly like any film for a long-running TV show does.

So, on its own, how does The Bob’s Burgers Movie work? Nothing about the movie changed my previous feelings about the series, the characters, the animation style, or its brand of humor. I did find myself chuckling a few times at some of the jokes, but for the most part, the style of the film just doesn’t land well with me. Even if it’s just viewed as a one-off story, it just didn’t hook me. I didn’t find it emotionally engaging or the characters all that likeable. I would much rather tune into a new story like The Bad Guys than watch a movie of this style. The murder mystery was a little intriguing, and I can’t say if it actually involves new characters to the show or seasoned ones, but that was probably the most engaging aspect of the story. In the end, however, I found the movie as a whole to be pretty unmemorable.

The content for The Bob’s Burgers Movie does earn it its PG-13 rating, but it isn’t excessively vulgar or crude. Still, there are some suggestive and silly jokes – like Tina’s obsession for a boy at school that she likes and continues to fantasize about his butt and seeing him in just his briefs — and quite a lot of uses of “Oh my G-d” and its variants as exclamations. There are also a few uses of “h*ll,” “d*mn,” and “*ss” mixed in as well. The murder mystery is handled pretty delicately — with a flashback at the beginning showing the shadows of two unseen characters struggling and then we hear a gunshot off screen. Later, when Louise stumbles upon the buried corpse, the skeleton falls on her and some of its teeth fall into her open mouth. It’s gross, but I suppose it’s played for shock and laughs.

In all honesty, I do know I’m not the best person to be reviewing the movie for a long running series I’ve never watched, but from the perspective of someone who is going in fresh to it, I find its merit as a standalone movie severely lacking. It’s probably just want fans would want in a Bob’s Burgers feature film, but if you have no previous history with the series, I see no reason to start with this movie.

Sex/Nudity: Tina sings about a boy’s butt in a song; We see two boys wrestling on a school yard. One yells “ow! My penis area!”; In a fantasy about riding horses with the boy she likes, Tina encourages the boy to remove his pants and we see him in just his underwear; Linda hits Bob in the crotch twice; A man yells to Bob, “Bob, grab your meat!” Bob replies dryly, “Please don’t shout that at me.” The man then whispers it again to Bob; Linda wears a burger suit with a bikini on it. When Bob questions her about it, she says “Sex sells!” Bob asks, “Is that sex?”; Later, we see Gene wearing the burger suit with a bikini on it; A cop asks a couple of kids if they should be in “that place with the books and adults telling you what to do?” Gene then guesses “adult bookstore?”; Linda yells out “Sexy burgers!” while trying to get people to try their burger stand. Bob asks if she looks like a “street walker”; Someone says to Tina, “Tina get your head out of your boobs!”; Tina imagines the boy she likes, Jimmy Jr, shaking his butt in his underwear at her; To get into a secret passage, a character is shown tweaking the statue of Poseidon’s nipples; One of the kids is shown then tweaking the statue of Poseidon’s nipples to open the passageway; We see some men in a sauna with their bare torsos visible; When the word “grinding” is mentioned, Tina asks “Grinding like sexy dancing?” causing Bob to ask “What?” and she replies, “Nothing.”

Alcohol/Drugs: A man driving a car is drinking from a champagne bottle with a long straw; A man says he is drunk; A skeleton pops out of the dirt at Louise. It then falls on her and some of its teeth fall out and into her mouth; There’s talk about buying drugs. A kid says he can’t swallow pills; Felix preps drinks on a bar; A joke is made about kids drinking and not being able to hold their liquor; We see Felix drinking; Grover drinks Felix’s drink.

Blood/Gore: We briefly see three cartoony zombies ride by on a horse in Tina’s fantasy; We see Louise holding one of the corpse’s teeth and it’s focused on a few times; The post-credits scene shows the zombie kids on a horse again.

Violence: At a carnival at night, we see the silhouette of a struggle between two unseen characters and then we hear a gunshot off screen; We see two boys wrestling on a school yard; A sinkhole erupts in front of the Belchers’ restaurant, causing a water main to rupture into the air; We briefly see three cartoony zombies ride by on a horse in Tina’s fantasy; Tina smacks the boy; Louise falls down the sinkhole; A skeleton pops out of the dirt at Louise. It then falls on her and some of its teeth fall out and into her mouth; A cop throws dirt at another cop; Linda hits Bob in the crotch twice; We see guys wrestling in a carnie park; The kids stumble and slide downstairs on a slide suddenly; A man slides down the slide and crashes at the bottom; A man points a spear gun at the Belchers; We see a flashback of the victim being shot and then buried; We see some stylized animation of a fire at a carnival; We see a car chase where top of a car gets cut off by a low over hang; A car rams another car and pushes into a hole and pushes dirt on top of it; We see a water main burst; The post-credits scene shows the zombie kids on a horse again.