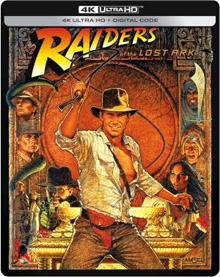 Raiders of the Lost Ark

In 1936, archaeologist and adventurer Indiana Jones is hired by the U.S. government to find the Ark of the Covenant before Adolf Hitler’s Nazis can obtain its awesome powers. (from IMDb)

To celebrate 40 years of Indiana Jones, Paramount Pictures recently released a 4-movie, remastered 4K collection of the Indiana Jones movies. It’s officially no longer “The Complete Adventures,” because – as I type this – a fifth and reportedly final movie is being filmed right now, with Harrison Ford reprising his role for one last time. Up until this point, I’ve only ever reviewed one of the movies for this site, so I feel like the best way to review this set is to take a look back at each one individually, starting with the original film, Raiders of the Lost Ark. 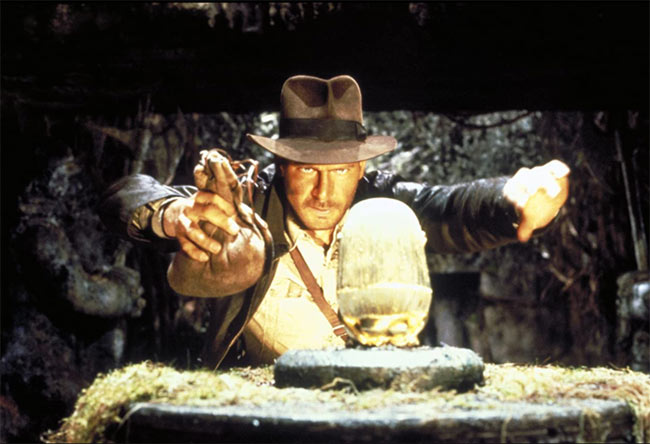 Now considered a modern classic, Raiders of the Lost Ark released in 1981 and introduced the world to the new action hero archaeologist, Indiana Jones. Harrison Ford brought the charming and daring hero to life on the big screen, coming off the success of two popular Star Wars films where he starred as Han Solo. Moviegoers couldn’t get enough of Jones, and Steven Spielberg and George Lucas’ creation would end up spawning three (now four) sequels. But Raiders of the Lost Ark is a unique animal all its own.

Raiders of the Lost Ark really affected cinema in a huge way; if you’ve seen movies like the Brendan Fraser-led Mummy movies, Tomb Raider (the movies and the games), Jewel of Nile, the Uncharted games (and forthcoming movie), and many other similar treasure-seeking adventures on both the big and small screens, then you’ve seen the influence that Spielberg, Lucas and Ford have brought to storytelling. Ford brings a lot of character and life to Indy and makes him a kind of everyday man who has the backbone and courage to get the job done and thwart evil at the same time. He kind of fights for the little guy while quenching his thirst for knowledge and facts. All throughout the series, he struggles with his belief in the supernatural. He’s a firm believer in what he can see, hear and touch, so when he’s tasked to go after The Ark of the Covenant–before the Nazi’s get it–he’s hesitant to believe it even exists. I loved Indy as a hero when I was a kid – even if Raiders of the Lost Ark was way too rough for my little eyes to take in at the time. But it’s his journey in 1989’s The Last Crusade that has solidified Indiana Jones as one of my all-time favorite characters and that movie as one of my top 3 favorite movies of all time. (But more on that movie when we get to it…) 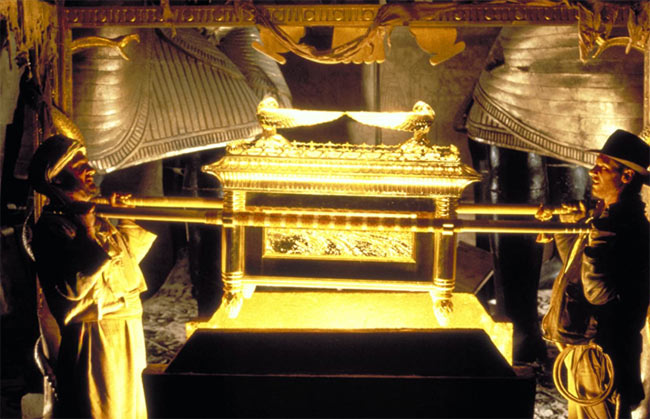 The Biblical aspects of Raiders of the Lost Ark are just one of the many things to like about it. The plot becomes a race between good and evil as the Nazis try to find the Ark first so they can use its power to conquer the world (in theory, of course). While Jones is flawed and hardly the perfect role model, his intentions are more pure, and by the end, good wins out over evil, and his belief system is changed forever. Paul Freeman plays a rival archaeologist named Rene Belloq who is more in it for the power and money than the archaeology. He ends up becoming a tool of the Nazi’s to help acquire the Ark. Freeman is a great foil for Ford’s Jones, and one of the movie’s best scenes is when the two simply sit and face-off verbally in a pub about midway through the film. Karen Allen, although not my favorite flame of Indy’s, is a great match for him here as well. And I think that’s what makes this film work so well — the characters all stand out and complement each other so well. 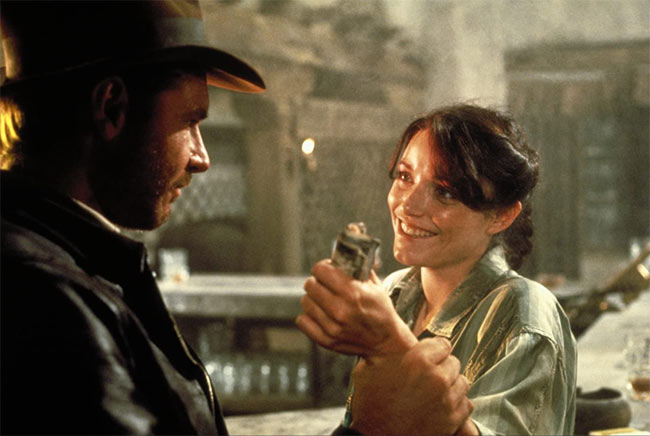 While Spielberg seems to hit all the right notes in Raiders (unlike Crystal Skull, where it seems nearly every choice is a head-scratcher), don’t let its PG-rating deceive you. The movie has some pretty gritty and rough moments. One could argue that some of its most grotesque images are hardly realistic looking, but they’re no less gruesome. When Indy and Satipo stumble upon a partially-decomposed skeleton of a rival archaeologist in the movie’s earlier moments, it’s gross, which is only amplified by a creepy head-turn that it does. And after an unsettling encounter with large spiders (I’m not a fan), we soon see a freshly impaled face on large spikes with blood and the victim’s eyes frozen open in shock. Later in the movie, a man is beheaded off screen by an airplane propeller blade and we see blood splatter on areas around other characters. Many of the fights involve blood spraying during hand-to-hand combat or from some gunshot wounds. When Indy is shot in the arm at one point, blood sprays a vehicle windshield. There’s also an inexplicably frightening scene when Allen’s Marion finds herself in a tomb filled with corpses that seem to reach for her and paw at her as she screams. The sight than cuts to a skull with its mouth wide open and a very large snake slowly slithering out of it. It’s like a scene ripped right out of a horror movie and plopped into a sequence where it doesn’t really fit. (And boy, did that scene scare the pants off me as a kid!) Finally, the last moments of the movie see a crowd of Nazi’s get zapped by lightening and fried, and then a couple characters’ faces quickly melt off like a burning wax candle. Their heads then explode–as if the face-melting wasn’t gross enough. Older viewers may laugh at the early 80’s effects, but there’s still a part of me that sees it with the eyes I originally saw the movie with and rather look away. 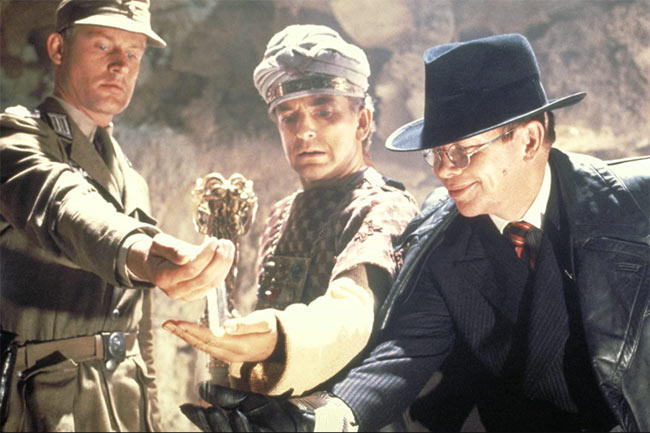 Overall, Raiders of the Lost Ark is an absolute classic. While the third film in the series will always be my favorite, Raiders is a pretty close second. And its first sequel, Temple of Doom just can’t even begin to hold a candle to its predecessor. 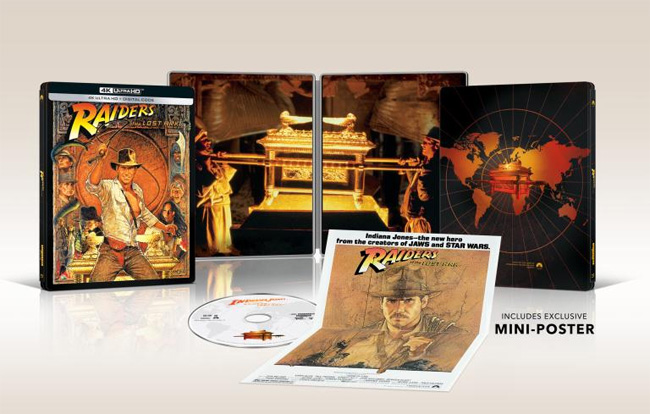 Single Disc 4K Steelbook: For 2022, and just in time for Father’s Day, Paramount Pictures releases Raiders of the Lost Ark separately in 4K UHD for the very first time. This limited edition release comes in a sleek, black steelbook with cover art that dons the original theatrical poster artwork. Inside the case is a single 4K disc for the film, a slip with a digital copy code, and a fold-out poster the boasts another design for the vintage theatrical poster. Beneath the clear disc tray is a still shot from the film featuring Indy and Sallah lifting the Ark, and the back cover has a world map in red-on-black with an image of the Ark in the center. The digital copy does include a bunch of great extras, so while this disc is absent of special features, you can find them on iTunes or VUDU. According to Paramount, this summer will see single 4K steelbook releases for each Indiana Jones entry, with Indiana Jones and the Temple of Doom on July 12, Indiana Jones and the Last Crusade (my favorite!) on August 16, and Indiana Jones and the Kingdom of the Crystal Skull on September 20. This seems like a great way for collectors to get ready for Indy 5 hitting theaters in June 2023. Raiders looks beautiful in 4K, so if you’ve been waiting to scoop this one up on its own, now is the perfect time. – John DiBiase, (reviewed: 6/13/22) 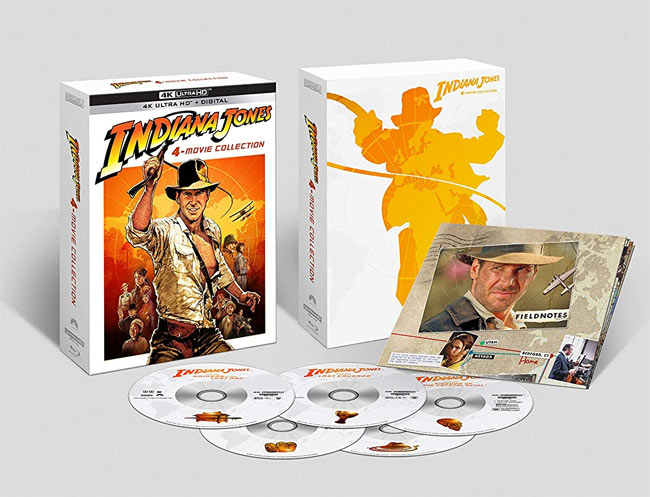 2021 4K Box Set: Raiders of the Lost Ark is now available in brilliant 4K UHD. You can get it on its own digitally now, or in a special 5-disc, 4-movie 4K set. According to Paramount Pictures, “all four films are available together in 4K Ultra HD with Dolby Vision® and HDR-10 for ultra-vivid picture quality and state-of-the-art Dolby Atmos® audio*. Each film has been meticulously remastered from 4K scans of the original negatives with extensive visual effects work done to ensure the most pristine and highest quality image. All picture work was approved by director Steven Spielberg. In addition, all four films were remixed at Skywalker Sound under the supervision of legendary sound designer Ben Burtt to create the Dolby Atmos® soundtracks. All original sound elements were used to achieve the fully immersive Dolby Atmos® mixes while staying true to each film’s original creative intent.”

Guys, let me tell you – the movie looks gorgeous. Raiders of the Lost Ark has never looked this good. The clarity is mond-blowing, the color is vibrant, and the sound is noticeably enhanced. I don’t have a Dolby Atmos setup, but all through watching these 4 movies again, I clearly noticed enhanced audio — things moving across the room from speaker to speaker, and even background sounds I never noticed before. This set is wonderful for any Indiana Jones fan!

The 4K set also includes a standard Blu-ray disc with seven hours of previously released bonus content as detailed below:

Sex/Nudity: We see many natives’ bare butts in thong-like bottoms; Marion takes her off her outfit to put on a dress for Belloq and we see her bare back as she removes her bra in a mirror (that Belloq is watching her in). The dress goes low in the back and the front with a tiny bit of cleavage; We see Marion in a night gown. She kisses areas Indy says doesn’t hurt, then passionately kisses his mouth and he falls asleep; Marion wakes the next morning with just a blanket on her (we see her bare shoulders); A ship captain lies to Belloq’s crew, telling them that Marion has “value” and “will fetch a good price.”

Alcohol/Drugs: We see Marion and a man doing shots till he falls over in his chair; We see Indy drinking liquor while sitting at a table; Indy joins Belloq with his bottle who is also drinking; Marion and Belloq drink. They get silly drunk.

Blood/Gore: Spikes jump out of a wall with a partially decomposed body on it, missing parts of its face; We briefly see the previously seen decomposed face on spikes and then Indy suddenly comes face-to-face with a man who’s face has been impaled with spikes with some blood on it; We see a man fall over with bloody darts sticking out of his back; A man catches on fire and is shot in the head with blood pouring down his face; Marion shoots a guy and blood pours out of his mouth as he falls over; Indy shoots a man hanging off the side of a truck and we see blood on his clothes; A big man punches Indy, splitting his lip with some blood; The large man’s nose and face is bloody, and he has some blood on his bare shoulder. The blade of a plan beheads him off screen but we see blood spray onto the cockpit window and plane fin; We see some blood on Indy’s face as he fights bad guys in a truck; Indy is shot in the arm with blood spraying. We see his blood is then on the windshield of the truck; A man punches Indy in his injured arm and we see blood on the man’s fist; As Indy lies on a bed with Marion tending to his wounds, we see bloody scrapes on his bare chest and a bloody bandage on his arm where he was shot; We see some scrapes on Indy’s hands and an abrasion on his forehead; Lightening burns through the Nazi soldiers, killing them. The faces of Belloq, Toht and another soldier melt off as they scream (like candle wax. Pretty gruesome). Belloq’s head then explodes.