“RADICAL LOVE: LEARNING TO ACCEPT YOURSELF AND OTHERS” 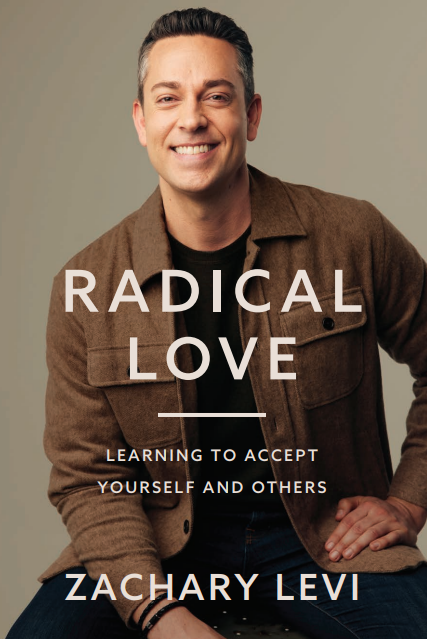 Los Angeles, Calif. (March 10, 2022) – Acclaimed actor Zachary Levi (Shazam!, The Marvelous Mrs. Maisel, Chuck) announces the upcoming release of his debut book, “Radical Love: Learning to Accept Yourself and Others” (Harper Horizon). Out June 28, the Hardcover title also features both eBook and self-narrated Audiobook editions and is available for preorder today in all three formats.

“Radical Love” is Levi’s personal story of grappling with a lifetime of historically crippling anxiety and depression, that stems from childhood trauma and the voices in his head that told him he would never be good enough. It provides a raw yet honest, behind-the-scenes account of Levi’s life and career successes and disappointments. Levi intimately details his personal journey of struggling with his mental health, that led to him to rock bottom and landed him in a therapy center, where he learned to address the underlying issues that preceded his downward spiral.

“My hope in sharing my story is that people who have experienced similar traumas in their own lives feel seen, heard, and loved; and know they are not alone in the ongoing battles they fight within their own hearts and minds,” says Levi. “There is no magic cure for these things, as much as I wish there was one. It is a journey full of ups and downs, victories and challenges, but most importantly toward loving and valuing yourself and others as we are intended: entirely and unconditionally.”

With relatable illustrations to help others work through and conquer their own personal journeys toward mental wellness, “Radical Love” is a combination of witty, touching, and powerful commentary. With honesty and humor, Levi relates his healing mental health journey, and shares valuable lessons and insights he gained along the way so that others can rise from the ashes of trauma and pursue meaningful lives of gratitude.

“The health risks caused by anxiety and depression are well-documented today,” says Andrea Fleck-Nisbet, publisher of Harper Horizon. “At their most dangerous levels, we see them reflected in the tragic number of suicides each year. If we are going to address this mounting issue, more work is required from each of us to remove the stigma of seeking mental healthcare.”

Fleck-Nisbet adds: “By sharing his story in ‘Radical Love,’Zac is offering readers permission to open up, find safe communities, and bravely celebrate their stories. We are honored to be Zac’s publisher, and believe this book will be the spark of hope needed by so many who struggle with their mental health.”

“I’m not an expert, therapist, pastor, teacher, or monk,” says Levi. “I am merely a person going through my own mental and emotional health journey, hoping that I can pass on some of the wisdom and tools that I’ve been blessed enough to learn along the way. And I truly believe that if we can help heal the hearts and minds of everyone on earth, we will solve every other problem known to man in the process.”

Zachary Levi is one of the most versatile actors in Hollywood with critically acclaimed roles in TV, Film, and on Broadway. Zachary’s career catapulted as the lead and fan favorite, Chuck Bartowski, in the hit NBC series, Chuck. Zachary demonstrated his range as a Tony Award Nominee for Best Actor in a Musical in She Loves Me. His impressive vocals landed him a leading role in the Disney Academy Award nominated (Best Original Song) animated musical, Tangled. He also took home a SAG Award for “Best Ensemble in a Comedy Series” from his recurring role on Amazon Studios’ Emmy winning series, The Marvelous Mrs. Maisel. Zachary starred in the 2019 blockbuster hit, Shazam! for Warner Bros./ New Line Cinema that held the #1 spot at the box office for two weeks in a row and will be reprising his role in Shazam! Fury of the Gods releasing December 2022. Levi most recently portrayed iconic NFL MVP and Hall of Fame quarterback, Kurt Warner in American Underdog for Lionsgate directed by Andrew and Jon Erwin. Channeling his role as the. Zac will return with the Erwin brothers for another Lionsgate film The Unbreakable Boy, based on the true story of the most inspiring boy who touched and changed the lives of those around him. Zachary is a champion of the importance of mental health through his Ambassadorship with Active Minds, a non-profit focused on providing mental health services on college campuses across the country.

Harper Horizon is a Nashville-based imprint within HarperCollins Focus, publishing nonfiction literature across a number of categories including self-help, memoir, health and wellness, cooking, and other inspirational topics that reflect the values and cultural diversity of America’s Heartland. Harper Horizon exists to empower the minds of readers to all things possible, whether that is learning a new skill, building community, improving the environment, or having the courage to embody their beliefs. Learn more atwww.harper-horizon.com.