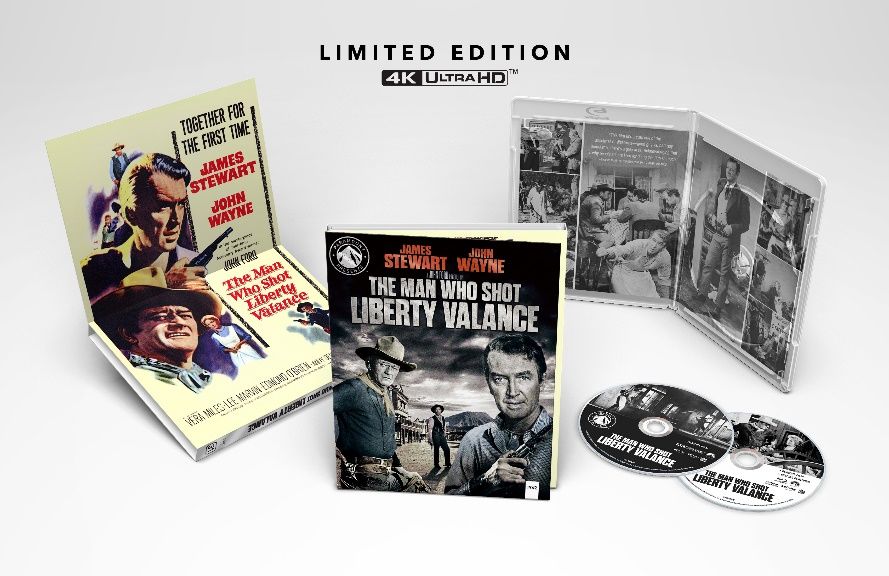 One of the greatest Westerns in cinematic history arrives for the first time ever on 4K Ultra HD with High Dynamic Range (HDR) as part of the Paramount Presents line when THE MAN WHO SHOT LIBERTY VALANCE debuts May 17, 2022 from Paramount Home Entertainment.

Four-time Academy Award®-winning* director John Ford brought together an all-star cast for what is considered by many critics to be a quintessential—and yet pioneering—Western late in his storied career.  Starring James Stewart and John Wayne (together for the first time), alongside Vera Miles, Lee Marvin, John Carradine and Lee Van Cleef, THE MAN WHO SHOT LIBERTY VALANCE tells the engrossing story of a senator (Stewart), his old friend (Wayne), and a despicable outlaw called Liberty Valance (Marvin).

THE MAN WHO SHOT LIBERTY VALANCE was selected in 2007 for preservation in the United States National Film Registry by the Library of Congress for being “culturally, historically, or aesthetically significant.”  Adapted from a short story by Dorothy M. Johnson, the screenplay by James Warner Bellah and Willis Goldbeck gave us the often-quoted line “When the legend becomes fact, print the legend.”

Meticulously remastered in stunning 4K Ultra HD for its 60th anniversary this year, THE MAN WHO SHOT LIBERTY VALANCE is presented in collectible packaging featuring a foldout image of the film’s original theatrical poster and an interior spread with key movie moments.  The release also includes access to a Digital copy of the film and a Blu-ray Disc™ with a new Filmmaker Focus featuring film historian Leonard Maltin discussing John Ford, the film, and its legacy.  The Blu-ray™ also includes legacy bonus content as detailed below: