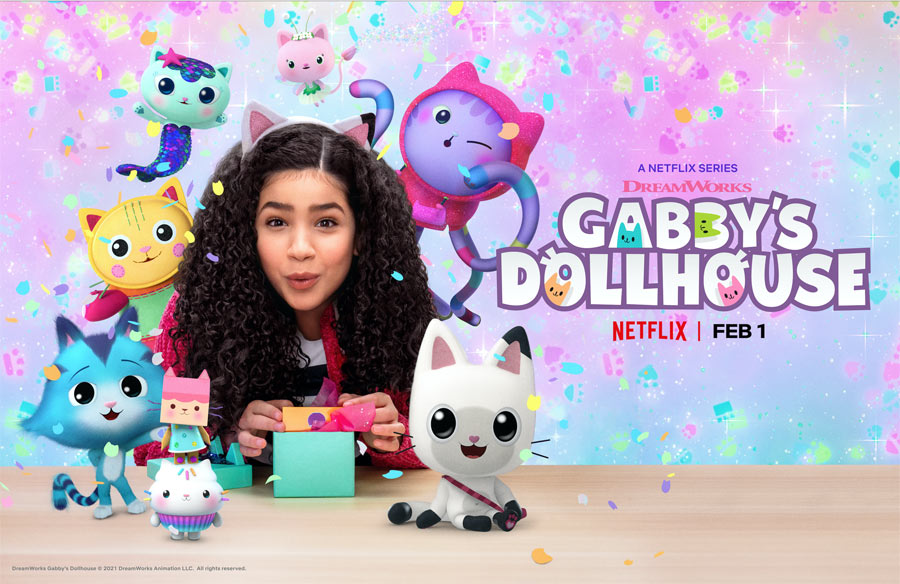 In celebration of the one year anniversary of DreamWorks Animation’s Gabby’s Dollhouse premiering on Netflix, the popular series returns for a fourth season on Netflix February 1. Check out the Season 4 trailer below!

This season, something special is in the air at Gabby’s Dollhouse as Gabby, Pandy Paws and all the Gabby Cats celebrate the happiest cat day of the year, Purrsday! Complete with Box Cat Family crafts, kitty dress-up with Mercat, a steller safari adventure, and a performance from feline pop star sensation Fluffy Flufferton, there are so many things to celebrate! A special visit from a tin full of Cakey Cat’s cousins is the icing on the kitty-cupcake. Get tiny with Gabby for hug attacks, cat-tastic adventures, and some whoopsies along the way!

Created and executive produced by Traci Paige Johnson (Blue’s Clues, Daniel Tiger’s Neighborhood) and Jennifer Twomey (Blue’s Clues, Team Umizoomi), Gabby’s Dollhouse is a mixed media series that unboxes a surprise before jumping into a fantastical animated world full of adorable cat characters that live inside Gabby’s dollhouse. Any adventure can unfold when we play in Gabby’s Dollhouse!

At the heart of Gabby’s Dollhouse lie important messages that instill a growth mindset. Gabby’s adventures celebrate making mistakes and finding creative ways to learn from them. Some of Gabby’s kitty friends may not be as flexible when their adventures become challenging, but Gabby is never afraid to, in her words, “fail fantastically” and make something beautiful out of a tough situation. Her positive attitude and resilience helps everyone see the best in any situation.

ABOUT DREAMWORKS ANIMATION:
DreamWorks Animation is one of the world’s leading producers of high-quality, animated family programming, reaching consumers in more than 190 countries. Creating a diverse array of original content in a variety of formats and delivering deep, fully immersive worlds served up with compelling characters, the prolific studio has garnered 27 Emmy® Awards since inception in 2013 and is home to such beloved series as Spirit Riding Free, She-Ra and the Princesses of Power, Archibald’s Next Big Thing, Kipo & the Age of Wonderbeasts, The Boss Baby: Back in Business, Kung Fu Panda: The Paws of Destiny, The Epic Tales of Captain Underpants, Dragons: Race to the Edge, All Hail King Julien, and the recently released Gabby’s Dollhouse and Go, Dog. Go! DreamWorks is a division of the Universal Filmed Entertainment Group within NBCUniversal, a subsidiary of Comcast Corporation.