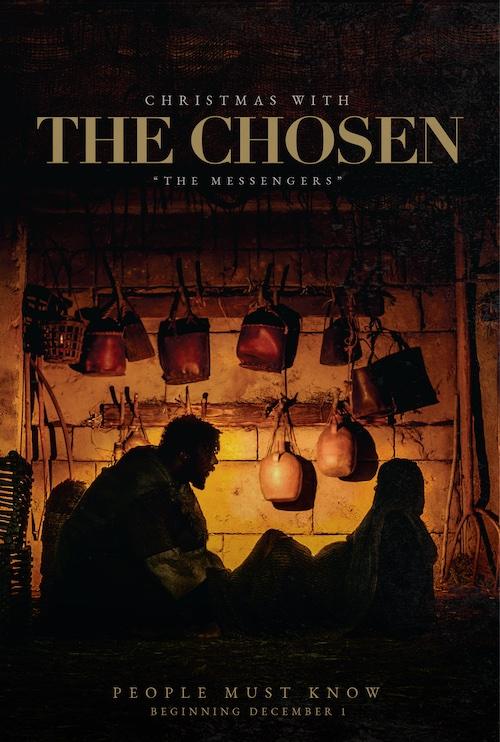 DENVER –December 16, 2021 – Fathom Events announced today that, in support of the overwhelming demand for CHRISTMAS WITH THE CHOSEN: THE MESSENGERS, the company has been able to bring this event to more than 1,000 churches,100 new exhibitors, and schools accounting for an additional 50,000 tickets sold.

In addition to Fathom’s robust, nationwide theatrical footprint supported by AMC, Cinemark, and Regal Cinemas, Fathom has fostered relationships with other organizations and exhibitors who offer a smaller footprint to bring content to fans who might not otherwise have the opportunity.

Fathom worked closely with the Faith Content Network (FCN) and their over 7,500 Churches in all 50 states to provide opportunities for large groups, congregations, and communities to attend a showing of the smash hit event. The showings reached beyond actual churches to other locations such as high schools and community centers.

CHRISTMAS WITH THE CHOSEN: THE MESSENGERS broke sales records for Fathom Events, which released it in 1,700 movie theaters nationwide recording sales topping $13.5 million for more than 1,000,000 tickets sold.

“At Fathom, our goal is to work with our partners to deliver content where there is demand. Our technology, relationships, and expertise allow us to deliver best in class events for fans and underserved audiences nationwide, said Ray Nutt, CEO of Fathom Events. “These collaborations result in shared experiences within a community and have helped improve the bottom line for many small, local theaters around the country.”

“This combination of FCN’s adaptive rate delivery technology, turnkey ticketing platform, and the willingness of Churches to participate delivered stellar results for this title,” said Bob Elder, Co-Founder at FCN. “It was an amazing event to end the year with!”

Fathom has a history of programming various genres – including faith related content – that resonates with consumers. This swift increase in religiously affiliated partnerships stems directly from Fathom’s ability to move quickly to answer consumer demand, commitment to quality content and strong partners.

CHRISTMAS WITH THE CHOSEN: THE MESSENGERS, has been extended in many theaters and churches to run through December 23rd.

ABOUT FATHOM EVENTS Fathom is a recognized leader in the entertainment industry as one of the top distributors of content to movie theaters in North America. Owned by AMC Entertainment Inc. (NYSE: AMC); Cinemark Holdings, Inc. (NYSE: CNK); and Regal Cinemas, a subsidiary of the Cineworld Group (LSE: CINE.L). Fathom operates the largest cinema distribution network, delivering a wide variety of programming and experiences to cinema audiences in all the top U.S. markets and to more than 45 countries.

ABOUT FAITH CONTENT NETWORK, LLC The Faith Content Network is a network of churches that presents new, faith-driven, theatrical events available in tandem with exclusive Fathom Events, providing local churches day-and-date access to first run, event-ized theatrical releases. FCN is a joint venture between Collide Media Group, in:ciite Events, and Engage Media Partners each with a deep history marketing and distributing faith content to the evangelical Christian audience. Collectively, the companies have worked on over 100 films, generating more than 1 billion dollars in box office revenue, and have produced hundreds of events reaching tens of thousands of churches. For more information about FCN, visit www.FaithContentNetwork.com.